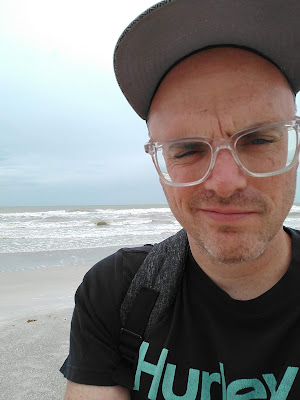 Josh Spilker is a writer and content strategist living in Nashville, TN. His new book is PLS Advise. When he's not writing, he's watching the NBA, paddleboarding or doing stuff with his family. Find him at www.joshspilker.com.

Changed my life? I don't think my first book changed my life in any significant way. The most significant change was the completion. And realizing that I can meet a goal. The newest book is shorter than the first, that's one difference. Otherwise, I'd say I'm not as emotionally invested in the newest one, even though it's more personal. Now, it feels like something that is supposed to happen, and brief sketches are already down for the next one. So it goes.

Well, in college I was more into poetry. Poetry seemed more observational and not as long, so I thought I could do that. But I quickly realized I didn't enjoy reading poetry. So I didn't know why or how I would contribute something to that. I've been a reporter and I also work in content marketing for a living, so arguably I came to non-fiction before fiction. The demands of logistics and research aren't as demanding for fiction, at least not for the type of fiction I'm interested in.

Love process questions! No, it doesn't come quickly. And I'm not a person that outlines. Instead, I write very rough drafts that contain plot notes and basic dialogue. I write everything by hand, with legal pads. And then after I've written a few thousand words, I'll start typing it and editing it as I go. And then after I type, I'll start again and rework. Once those sections are "done," I'll go back to the legal pad and pick up where I left off, and write until I'm ready to type that section.

I like using legal pads and writing by hand, because I'll fill the margins with direction...about what to connect it to in the future or what to go back and add in. Usually I find myself writing sections and parts that aren't sequential, so I'll have to re-order it when I start typing.

4 - Where does prose usually begin for you? Are you an author of short pieces that end up combining into a larger project, or are you working on a "book" from the very beginning?

I'm definitely a person that writes with a larger novel in mind. I don't start with a "short story" even though I'll term some of my excerpts as such. That said, I don't have the book plotted out from beginning to end when I start writing. I often find myself writing first what later is actually the middle of the novel. Or the middle of the story at least.

I don't mind readings, but I don't actively seek them out. There are some local open mics and such, but I don't attend those too often. If someone invites me, sure I'll participate. I'm more likely to read my tweets or something humorous rather than what I'm actually working on...I've been to too many boring readings and so I want to keep the audience in mind at all times, especially since readings are such a different experience than reading a book.

Well, I studied postmodernism and experimental fiction in grad school, so whatever questions would accompany those things are interesting to me. Questions of authorship and determining what's real are two main questions that I think our culture is confronting for the first time in awhile. PLS Advise definitely deals with those. I feel like there's a higher demand in fiction in this time period for things to be real or not real, hence the rise of autofiction and the rise of dystopian sci-fi. Everything in between seems out of place in contemporary fiction.

I like this G.K. Chesterton quotation: "The way to love anything is to realize that it might be lost." The role of the writer is to uncover what may be lost or has been lost and bring that to attention. There could be some urgency around that call, especially in current political times.That uncovering  can happen in a documentary film or a well-made TV show, but it can happen even faster with well-placed commentary, article or critique.

For fiction writers or longer form meditations and memoirs, it may not be immediately pressing matters, but could be uncovering greater societal and cultural shifts.

To me, that's what writers do best: find what's being lost and give people a reason to potentially love it.

I don't find it essential; but there's no doubt that it's helpful. The editing process can (and potentially should) look a lot different than it used to. Crowdsourcing, commenting and public review can also provide a type of editing that may have only come from a single voice a generation or two ago.

Because of my day job, I do essentially  write every day. I don't always work on my personal projects every day however. So to that end, I don't keep a regular writing routine. Generally, I'll knock out administrative tasks and meetings in the morning, and try to carve out time to write in the afternoon. Most of the time, that's writing for my day job. My personal writing usually happens on the weekends or at night. I probably peak between the hours of 4pm and midnight, but due to you know societal norms and family life with young kids, I can't keep that schedule. So for my personal projects I'll work on things at night, like 9pm and after.

For inspiration/guidance in general, I go to the Bible which also has some good literary inspiration in there, too. The Book of Acts is pretty crazy with a lot of action and challenges to authority. 1 and 2 Samuel has a lot of family drama.

Otherwise, I'll reread a book by a favorite author and even copy down a few passages here and there to get in their head. That usually stirs something up in my own head and writing.

Sunscreen. My sister, her family and my parents live near the beach and I spent my high school years there. So slowly baked sunscreen reminds me of home.

I listen to a lot of music, but I don't think of it as necessarily impacting my writing, which means it probably does.

I would be naive to say think that the Internet and specifically social media isn't influencing my writing--it definitely is. The short bursts, incomplete thoughts, the constant stream of randomness is now probably the biggest influence on my writing and I don't even always know how.

A lot of books definitely influenced this book, and I put together a list of those here.  The book that most influenced PLS Advise is Ben Lerner's 10:04. I loved how he blended so much anxiety of the age into his work--about procreation, about equality, about disaster, about life ticking away--along with "his" own career and art. It was definitely a model for PLS Advise and I felt myself reflecting on it quite a bit while writing.

Live outside North America and write my next book.

I was very close to becoming a lawyer, and sometimes I even think about picking it up in my 30s. I've always been great at research and distilling information; I just don't know if it has enough creativity for me.

I'd say White Teeth by Zadie Smith, even though it was uneven in some places. Great epics seem to be effortless to her.

The last great film? I'd say Sorry To Bother You the Boots Riley film with Lakeith Stanfield. The third act was very bold and I'm sure most big-time studios would not have let him do that. But it was great and invigorating.

Lots of blog posts. I've started skestching ideas for the next book. I have a central idea, but I'm not certain what form or style it'll take. It won't be far off from my recent books like Taco Jehovah and PLS Advise...but I think there's a crime, which came out of nowhere.