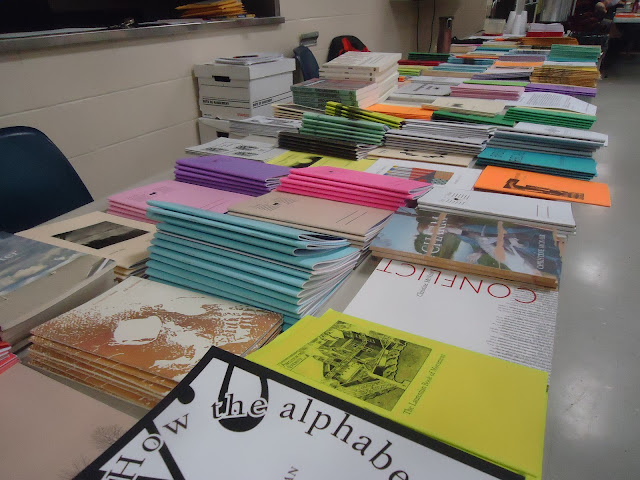 [some of the above/ground press spread]

Here’s another batch of items I picked up at the most recent ottawa small press book fair [see part three of this list here; see the most recent list from Toronto’s Meet the Presses]; these lists sure are giving the impression that the small press in Canada is pretty darned healthy and active these days, don’t you think? Why not support one or two of these presses by picking up some publications? Yes. I think that’s the best idea here.

Ottawa ON: I was quite humbled to realize that Pearl Pirie had been working on a plunder of my own works as a manuscript of poems, resulting in the small chapbook rob, plunder, gift (battleaxe press, 2018). As she read from such as part of the pre-ottawa small press book fair event, it was very strange hearing lines I recognized from my own multiple poems (even if I couldn’t place them or their context, necessarily), some going back more years than I care to count.

do you know what horizons hold?
a capacity to hold, hold

could you even see the smoke, imagine
bringing smallpox in blankets & jars

of coincidence, & hey, you too.     blocks
in a caretaker’s grid

& shallow certainties; abrasive noise
I emerge from each breath

The effect really is curious, as Pirie composes new poems out of the bones of my own fragments, creating both new poems and a strange kind of collaboration between our words and effects. Still, what really impresses is the extensive list of sources at the back of the collection, seemingly as long as the manuscript itself, and will provide some potential graduate student weeks of entertainment through searching and comparing. Oddly enough, seeing elements of my own words and phrases through her lens provides a fresh perspective upon her own work, and her own approaches, as she herself has developed her own twists, pivots and turns over the past fifteen or so years I’ve been attentive to her writing. As Pirie writes in her notes at the end of the collection:

I’ve read rob mclennan poems with bafflement and then increasing absorption and admiration since the early 90s.

Each poem is a sort of mandala, or twist of the kaleidoscope of context. It is a chance to see again how he pivots, deflects, dives. The poem can enter itself, open-endedly and see where it goes. It doesn’t rely on a papercut of profundity as the kicker of the page.

These poems make centos out of 25 years of his poems between 1993 and 2018. It was rather like corpus work, and a make-your-own-mystery at line and phrase level.

Over the making of these poems, from 59 poem sources, it’s been fascinating to re-read how linear relaying of anecdotes transformed into post-lyrical, non-narrative impressionism that better reflect his worldview of there not being a singular point of view, there not being a need for precious subjects, but a need to see others, listen, watch.

His model of write through — the good, the bad, the neutral, the comic and the undecided — has become a backbone of some of my wiggling movement forward.

Ottawa ON: Cameron Anstee hasn’t been producing as many chapbooks lately through his Apt. 9 Press, but at least he did produce a very graceful item of two poems: constellations, by jesslyn delia smith / Amour de soi, by Jeff Blackman. Produced in a numbered edition of eighty copies, this item isn’t even mentioned on the Apt. 9 Press website yet, so that shows how busy he’s been lately. While we are hoping he returns to producing chapbooks, this small item is quite lovely, allowing for an attention to a single poem each by two Ottawa poets that Anstee has been championing for some time [both have published titles with Apt. 9 Press, and both are also included in the Apt. 9 Press five-poet anthology Five]. “I have this great thought I think but I am on the go,” Blackman’s short poem begins, pushing for a kind of slow attention against his rushed thought that fights against silence. smith’s poem is quieter, writing out her own variation on silence, as the second half of her short piece reads:

a signal, a blip
no one sees

you leave me without
causing harm

i’m there as you found me

an address, a number
a name