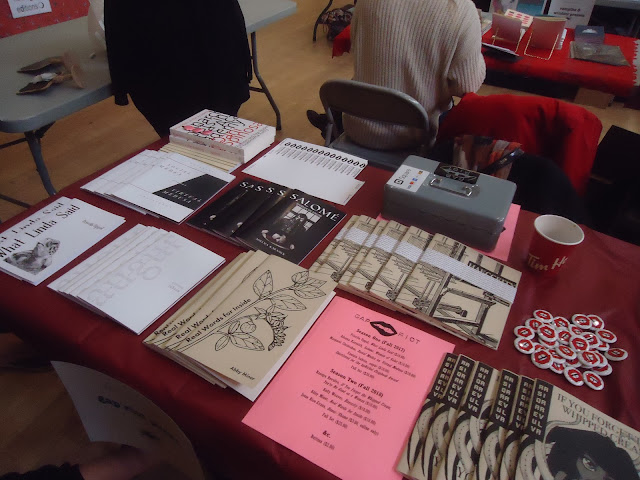 It seems like I picked up rather a lot of publications at this year’s Toronto’s Meet the Presses’ annual Indie Literary Market [see part four of my notes here; and you see I’ve been posting on our more recent ottawa small press book fair as well, yes?], doesn’t it? Well, here’s another list of items. So there!

London ON: Ottawa poet Sandra Ridley’s latest, following her Griffin Prize-nominated Silvija (Book*hug, 2016), is the chapbook Quell (Baseline Press, 2018), a sequence “written in the late summer of 2016 [.]” As the acknowledgements offer, this small sequence of prose poems “began at Perth, Ontario’s ‘Framework: Words on the Land’ event in August 2016.”

The edge. Transposed. Turn yourself away from it. It’s impossible to know where your gaze begins and ends, even if you touched the trace of it. Drift. Wood. This slight shift—fetched when our gasp elongates. Takes shape in foxtail restlessness. Sweat. Rivulet. Wet behind the knees. All this time, each moment, we search for one true furrow. Thistle-blade. The dark is coming. Unalterable. Stars pull themselves up from the swamp.

Ridley is notoriously quiet about what she’s working on, with publications often appearing without much fanfare, but she has quickly emerged into one of the strongest poets working in Ottawa, as well as one of the most read. I’m enjoying Ridley’s shift into the prose poem, a form she’s been working in, around and through for some time, so fascinated to see her focus on the poetic sentence, while still aware of pace, and breath, and cadence, writing in and among the absences, and small cracks. Her poem begins in the woods, and moves further out, attempting to disappear even as the narrator attempts not to be completely overcome. Is there a middle? What is this quell?

No sleep, no aftershock, no afterimage, no ghosted silvering, no depth, no swamp, no murk, no lake, breath, no sleep. Weak pulse kiltered to the rustle. Awake. Awake. Nothing happened—but lack.

Cobourg ON: I’m enjoying the oddness that is Toronto writer Heather Birrell’s short story chapbook Dreaming Fidel (2018), produced by Stuart Ross’ Proper Tales Press. I clearly need to be reading more of Birrell’s work (I blame the distraction of small children). What is Heather Birrell doing writing about Fidel Castro, you might ask? Hers is a curious examination of revolution, the public Castro, and a variety of conjectures. With a clarity and an oddness, she offers that “Fidel appears to me in miniature, a tiny perfect replica of his human self [...].” As her story begins:

Castro as a young man looks like a clean-cut boxer with his knobby out-of-joint nose, then an imperfect chubby Errol Flynn when he grows the thin moustache, and later still, in profile, somewhat regal, more seasoned. As the beard comes, in the moustache grows to meet it; the fatigues fit like a second skin. And there are the hats: the peaked pillbox army cap he wears on the sports field and, while leaning close to hear the greetings of important heads of state, the revolutionary beret pushed to the back of his head like a relaxed tea cosy, the wide-brimmed straw sun hat he dons for cutting sugar cane with the campesinos. His eyes are not wide. When he is not smiling they are guarded and sad. When he begins to smile they soften like ripening fruit. Sometimes he uses them to peer up through the cigar smoke that rises from his like steam from a kettle.