Richard Froude, Your Love Alone Is Not Enough


The Year of Half-Light remained in the moment of birth and death. The Year of Half-Light was the achievement we would to take to God but the Year of God refused to arrive. So we dug deeper into the highways and opened a chamber beneath the Year of Mirrors, a chamber flush with the years we would never know: years of precognition, years of impossible allotropes. So we teetered on this precipice: on one side of the Year of Unborn Ice, a year of torment, and on the other these years of exquisite beauty, touchable but too impossibly real. (“Prelude: Our Past”) 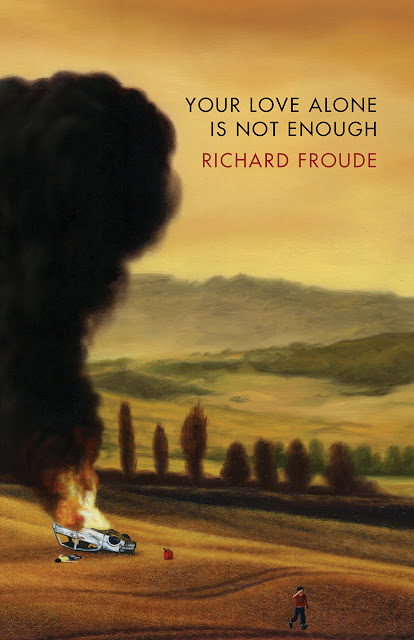 From American poet Richard Froude comes the debut novel, Your Love Alone Is Not Enough (Boulder CO: Subito Press, 2018), a lyric blend of narrative storytelling and poetic sentences. Given his first two books—Fabric (Denver CO: Horse Less Press, 2011) [see my review of such here] and The Passenger (Cheltenham, Glos UK: Skylight Press, 2012) [see my review of such here]—were poetry titles that explored the prose poem, the larger structure and the lyric sentence, a continuation further into prose to produce a novel isn’t, in certain ways, an unexpected move. With an opening sequence that feels almost Brautiganesque in style and tone, Froude provides the overall structure of the novel, and the novel’s sections, in the most curious kind of abstract, before moving into first section, and more tangible scenes.

Subtitled “a novel in ruins,” he offers thirteen short sections, as well as prelude and coda, with titles such as “The Year of Whispers and Purgatory,” “The Year of Improper Ascension,” “The Year of Windows,” “The Year of Our Defeat,” “The Year of Passing Cars” and “The Year of Unborn Ice.” Your Love Alone Is Not Enough is a book very much aware of its own structure, and the possibilities within, allowing both the shifts and the spaces between those shifts to wrap in and around each other, providing a series of direct and indirect threads. As he writes as part of “The Year of the Highway // The Year We Began // The Decisive Year”: “Form is recreated from tidal patterns: I have scraped my arms across the sidewalk, dragged my skin over broken bottles.” On the whole, Your Love Alone Is Not Enough is a book about grief, love and heartbreak, and a book very much about the benefits to and drawbacks of the very passage of time: the flashes of, and through, and the intricacies of its movement. With sections flipping back and forth between time and narrators, providing multiple perspectives throughout, this is a work of incredible detail and density, working in silence and hushed tones. As he writes, offering perhaps some perspective on the book’s author: “My single motivation is authentic experience. I can only approach it by telling stories.”

There is nothing atypical that I want, only the capacity for movement. It’s as easy as rabies, my friend, as natural as believing in an all-knowing, invisible God. The definition of mass is an object’s resistance to acceleration. What I want is painless, a methodical loss of this hindrance. To be carried by a tide: a ghost ship, an object set adrift on a surface already moving. I admit that I want to dissolve into the world. But more than that, I want the world within me.