Every loss I have ever felt has registered in my brain, marked my body, and influenced all of my relationships. I know that you feel the same way. Please believe me, I want sincerity most of all; however, I am saddened and frustrated to find that I, too, am tyrannized by irony. 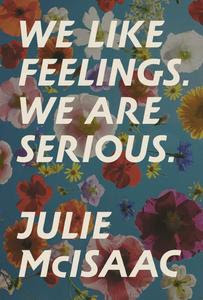 From Hamilton, Ontario writer Julie McIsaac comes the expansive and powerful We Like Feelings. We Are Serious. (Hamilton ON: Buckrider Books/Wolsak & Wynn, 2018), a poetry title that follows on the heels of her debut short story collection, Entry Level (London ON: Insomniac Press, 2012). McIsaac’s debut collection of poems rages against numerous oppressive systems while highlighting the often-unspoken traumas of female experience, composing poems as journal entries, and questioning her own behaviour as much as she shines a spotlight on the behaviour of others.

Through nine poem-sections—“Statement of Poetics,” “Young Love in the Post-Activism Era,” “Young Feminists in the Archive Era,” “Emotion of Hope,” “The Orange Toxic Event,” “The Suicidal Revolutionaries, Or God Bless Kathy Acker” “Haibun Dribs and Drabs / Scars and Scabs,” “Fire Poems I” and “Fire Poems II”—McIsaac composes a series and sequence of prose poems that accumulate to form short essays on experience, trauma, dismissal, resistance and methods of survival. As she writes to open the poem “FEMINISM IN THE ARCHIVE ERA”:

I am browsing the Feminist Archives.
The university libraries house them in their central middle-of-
nowhere branch.
I heard about this place through graffiti on a bathroom stall.
Good thing I have all this menstrual blood to write with to fill out
the call slips
Because there’s no money in the budget for little pencils.

Lonely on the margins
or lost in the middle
or nowhere at all.

Hers is a poetry that focuses her attention on forms of power that work to reduce or dismiss the contributions of women, from theory to patriarchy to literary writing to cultural influences to more intimate interactions. For all the rage that rages throughout, there is an enormous amount of play going on in the writing itself, exploring structures of the lyric sentence, prose poems and the haibun, allowing repetition and rhythm and the effects of sound to showcase her enviable ability to strike and parry, twist and sing at even the highest volume. She writes: “Is this the end of irony? / The moment that I have been waiting for?”

From inside the feminist bookstore: “But wait,” she says, “I want to talk about silence. Does dishing out the same shut up that we’ve heard for so long make us more powerful? Are we trying to just spread oppression more equally, thus begetting a new, morbid equality? Are we all in this pit together? Maybe I should be silent on this, or write it down in menstrual blood and delete the pronouns. I’ll fuck my sister, keep it in the family. Rainbows will explode out our eyes when we cum. I could sink a ship, a big fat cargo ship, a motherfucking oil tanker, with all my lust. But desire should be a weapon – right? – pointed at the horizon, the one we rode away from? That’s where I should keep my anger and my agency. Is that what you’re saying?”