Petals of the many-sided tree and inside corners arise from tears that occur in the broken layer, allowing blood under flatline pressure to enter the wall of the vessel and form a tinted glass. Disruption of the jellyroll can activate maps and the cornered cascade, leading to wall formation and bright silver.

Vancouver writer Elee Kraljii Gardiner’s second full-length poetry title is Trauma Head (Vancouver BC: Anvil Press, 2018), furthering the work she gathered last year in a self-published chapbook with the same name. As the back cover to the new collection reads: “In 2012, poet Elee Kraljii Gardiner precipitously lost feeling in, and use of, her left side. The mini-stroke passed quickly but was symptomatic of something larger: a tear in the lining of an artery that opened an examination of mortality and crisis. This long-poem memoir tracks the author’s experiences with un/wellness and un/re-familiarity with herself.” The earlier version, the chapbook-sized TRAUMA HEAD (Otter Press, 2017; second printing, 2018) [see my notes on such here] was a publication set in a file-folder of collaged text and images around and through brain scans, injury, trauma and healing; there was something of the project, even then, that felt unfinished, as though it were part of some as-yet-unrealized larger project. As she wrote of the chapbook at the time:

Trauma Head is a collection of poems and concrete interventions in the medical file. In fact, the binding IS a medical file. 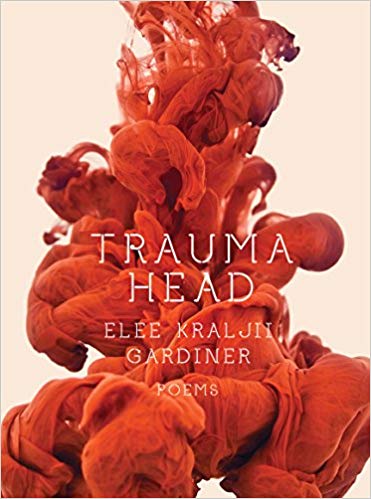 Trauma Head is a collection of fragments, files, bursts and medical records composed as a sequence of dislocations attempting to ground and connect themselves, seeking out the shards and scattered threads into something that might cohere into a form enough to continue breathing. There is such a remarkable and gymnastic display of sound and fracture, collision and stutter throughout her text, a meditative scatter of synapses attempting to move at high speed (even to the point of overlapping, becoming muddied), threading around and across a trauma, and towards comprehension, and eventual recovery. She writes of fear, and possibility; she writes of a struggle to survive, and even speak, pushing through her recovery, both to achieve it and to understand it, and to communicate the new shape of her gestures. “[P]ain wears me,” she writes, further into the collection, continuing: “is the tide / chewing cliff face / pain wears me // this injury tumbles me in the chop / is the tide // chewing cliff face / any hiatus            pain wears me // in the repetition of panic / this injury tumbles me in the chop / is the tide [.]”

Strange how fast we turn corners, start feeling better and forget what we were. For instance, today I biked, broke the glinting spider webs barring the path through the bushes. It is fall, hot and gold, two years gone / gained and I am only aware of this anniversary because of the cycle of time / weather. I went down to the river where the heat coaxed thick, wet fog up from the water. It spurned over the bank as I straddled the bike. I stood still to saturate my lungs with coolness. A seal below me held its silent, compact head above dark water; it breathed with me, its husky exhales a touch. We were waiting for something—the tugboat to pass, the fog to lift. Everything muted gentle as the seal’s whiteless eyes. Spoonful by spoonful each day I taste the river, the salt, clouds, all the recipes of blood. (“Prognosis”)