Logan Fry, Harpo Before the Opus


“What is a shape / Except resistance,” Logan Fry asks himself, and the poems of Harpo Before the Opus—in all their prosodic diversity, technical and historical lexicons, and the affective topographies—may be read as the literary manifesto for a resistance movement of one. Yet Fry also shows us how resistance may be grounded, all too often, in unacknowledged complicities. “I was taught to frag then surplus,” writes this disillusioned insurgent, a little sadly, in retrospect. It could be a line from some modern-day sequel to Duck Soup; Fry conscripts Karl into his personal pantheon of Marx Brothers, but he wryly names his book for the one who keeps mum. (Srikanth Reddy, Judge of the Omnidawn 1st/2nd Poetry Book Contest, “Introduction”) 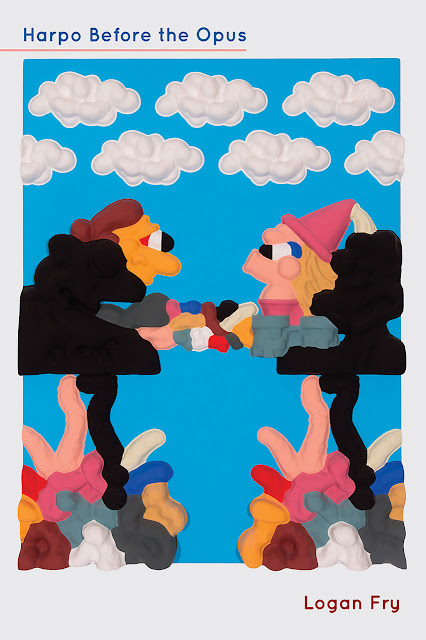 Austin, Texas poet (or, more specifically, “an Ohio poet who lives in Texas”) and editor Logan Fry’s debut, winner of the Omnidawn 1st/2nd Poetry Book Contest, is Harpo Before the Opus (Oakland CA: Omnidawn Publishing, 2019). Fry’s lyrics display a joyous complexity, a playful skimming and skipping across language and meaning into something deeper, as he writes to open the poem “ESSENTIAL ISLES”: “Tawdry indigo of error // To let down skirts, appeal // To blur daemonwater upon, well, us // Figs drop // then you trounce on them you don’t care [.]” There are times that Fry’s poems feel akin to sketches, composing the quick, skeletal structure to something large, and epic, contained within what feels, at first (and deceptively so), akin to a skimming of lines, before the eye begins to sink below the poem’s surface, such as the poem “APPARATUS,” that reads:

I was taught to frag then surplus.
I prime some flaw to gain with
It a forge. I huff a tint, then flex
To hustle some hard trusts up.
I have to come with u once more.

A form conjures itself, decides
That it is red. For instance, helots
Are the fleshy part that voids
Count as their fruit. The accident
Of flavor merely proves a serf
Has wished. So wishing isn’t cause

I fell unkindly, knowing forts
Hewn from the stopped lean easy.
When delay of cause wins an
End I finish glad. I so rest that way.