If this were a demonstration, voices would clamour with one tongue

If this were a vision, voices would speak prophetically about the past

If this were history, some voices would be forgotten ignored rewritten

If this were telepathy, a voice would be mystically multiplied

If this were a melodrama, voices would babble hiccup sob

If this were a circus, voices would show off their plumage then slip out of
someone’s grasp

If this were a game, some voices would have difficulty understanding the
concept of sides
(“Voices (remix)”) 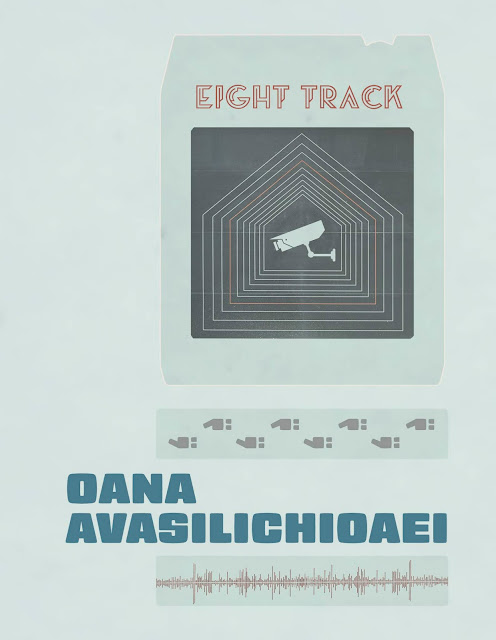 Montreal poet and translator Oana Avasilichioaei’s sixth full-length collection [see myreview of her prior collection, here], Eight Track (Vancouver BC: Talonbooks, 2019), writes on the overlap of two competing directions: the layering of audio tracks, and the increasing surveillance of both governments and corporations of our actions, movements and interactions. The book is constructed out of a series of sections, from radio scripts to a sequence of fragments to lyric theses to a series of counter-surveillance photos (photos of surveillance cameras around Montreal): “Voices (remix),” “Q & A,” “A Study in Portraiture,” “Trackers,” “If,” “On Origins (a radio drama with interference),” “Trackscapes” and “Tracking Animal (a survival + tracker’s marginalia),” as well as a “Bonus Track,” “Eight over Two (a soundtrack).” Given her performance explorations with recorded and looped sound, I am fascinated with how she turns some of those explorations back around into the text on the page, although nothing that breaks away into looped or overlapping text, a line of concrete and visual that she works up to, but never actually crosses. Avasilichioaei writes her poems, and even her photo-sequences, as poem-essays, writing through meaning, narrative and distance, targeting a sequence of ideas though both language and image. Her poems map out a range of occurrence, offering not answers per se, but making one aware of possibilities that might not have connected, or been previously known. As she writes of the poem/section “Trackscapes” in her “Liner Notes,” a poem on “The Líneas y Geoglifos de Nasca y Palpa, or the Nasca Lines, [that] li in the pampa of southern Peru, an arid plain nestled between the foothills of the Andes and the coast”:

As this is one of the driest regions in the world, the natural elements have preserved the Lines over centuries, though some have been damaged by human disregard (the Carretera Panamericana cuts through them, for example). It was only in 1994 that the The Líneas y Geoglifos de Nasca y Palpa were declared a UNESCO World Cultural Heritage Site. Many have speculated on their purpose, the more current thought being that they were ceremonial and related to water rituals (the Nasca left waterworks and aqueducts still used today), the cleared areas functioning as open-air temples. The wanderer Bruce Chatwin called them a “totemic map” (The Songlines) and poet and artist Cecilia Vicuña, a “libro desierto” or “desert book” (A Book of the Book).

In adding my voice/eye to those who have worked from this desert book, my intent is not to tell or document, for their story is not mine to tell. I can only visually attend to a story whose messages may have floundered in the floods and been buried in the earthquakes and wars that, by the eighth century, had decimated the Nasca. I bear presence to their abstraction, the (constantly shifting) drawings shaped by interactions between sky, environment, topography, perspective, and traces of human movement. In our world, so many meanings of track or tracking are negative, oppressive. The Líneas de Nasca stand in stark contrast to offer positive traces of human endeavour and survival. At the same time, they expose limitations of Western or Northern views and voices. They point to knowledge systems that valorize an intimate and necessary relationship to the ecosystems of the region; they trace a sense of connectedness, integrity, interconnection: an interwoven palimpsest of relationships with other people, animals, symbolic structures, the environment, and water. The lines are communal, for the required a group of people to make them, and they inspire movement and migration, necessary human acts.

Posted by rob mclennan at 8:31 AM
Labels: Oana Avasilichioaei, Talonbooks