the ottawa small press book fair 25th anniversary: what was at the first fair? 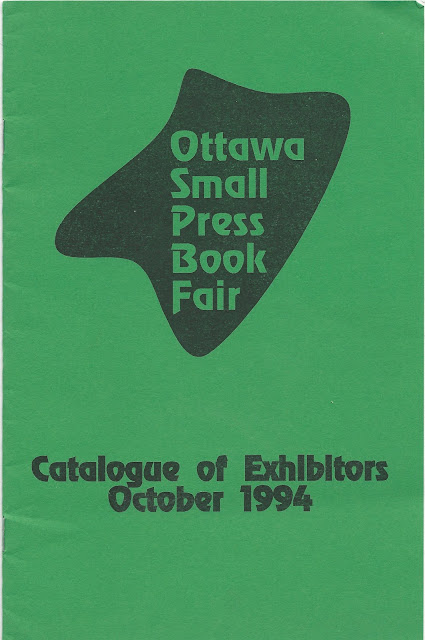 Given this weekend celebrates the 25th anniversary of the ottawa small press book fair (the fair itself on Saturday; pre-fair reading on Friday), I thought it might be fun to look through a few of the items/presses that would have been at that first Ottawa event, way back in October 1994 in the lobby of the National Archives of Canada on Wellington Street. James Spyker and I originally founded the Ottawa fair, modelled on what little we know of the infamous Toronto Small Press Book Fair (an event begun in 1987, emerging out of the Meet the Presses monthly events).

Not long after our first fair, James Spyker (who produced the first catalogue, as well as creating the original logo) relocated to Toronto. A year later, I organized a second event, relocating the fair into the great hall of the Glebe Community Centre. We enjoyed the Archives space well enough, but we hadn’t any foot traffic at all, so anyone who came through were highly deliberate; the corridors were empty, with the occasional archivist wandering through to the elevator. Now this was in the days when room 156 of the building was well-known to hold multiple literary readings and launches, before the Harper Years clamped down on literary events in the building; I’d been to a reading and launch of a collection of John Metcalf’s essays the same year, for example, in those same corridors. In the early and mid-1990s, I even organized/hosted numerous poetry readings there myself. But the weekend traffic simply didn’t exist.

It was only a decade or so back that the fair moved onto Elgin Street, where it has since lived at the Jack Purcell Community Centre. The Glebe Centre was being closed for a full year for the sake of renovations, so I couldn’t do anything there. And Elgin Street has better walk-by traffic (and actually includes the event on their notice-boards, something Glebe wouldn’t do). And we have coffee. 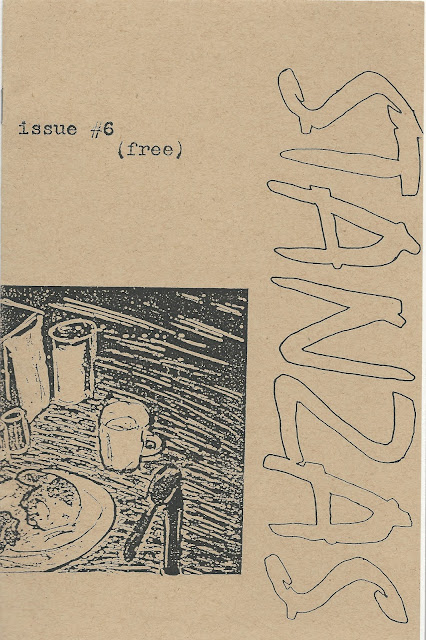 And did I mention that the first few fairs were weekend-long? The fairs were both Saturday and Sunday from noon to five, as I would host an exhibitor-friendly small pot-luck gathering in whatever hovel-apartment I happened to be living in at the time: I requested locals bring food, and out-of-towners bring drink (with the logic that out-of-towners then didn’t have to spent too much money on feeding themselves, and we could actually hold an event where we could get to know each other better). I remember first interacting with Mike O’Connor (editor/publisher of Insomniac Press), for example, and two of his authors sitting on my furniture-less apartment floor back on Fifth Avenue during one of those gatherings.

I can’t remember when we first held our first pre-fair reading. I would say somewhere in the “fifteen years ago” range, or thereabouts. Perhaps roughly when I moved The Factory Reading Series (established January 1993) to the Carleton Tavern in the Parkdale neighbourhood, nearly two decades back (someday I’ll figure out exactly when these things occurred, but I suspect circa 2000-2001). The Toronto Small Press Fair used to hold their readings immediately after the fair, but the last thing I want to do is go to a reading after standing for that many hours: I would rather eat, drink and interact with the other exhibitors. And this way, our reading is anticipatory: see what you have to look forward to tomorrow?

By spring 1996, the fair had become semi-annual—I think I had actually forgotten that the fair actually wasn’t semi-annual (it would be another couple of years before I realized I had made this shift, most likely based, yet again, on the schedule of the Toronto Small Press Fair). And, around the same time, the fair shifted from two days down to a single day. And after the debut event in October 1994, I’ve organized the remaining fairs solo. How the hell did I make it to a whole quarter century? 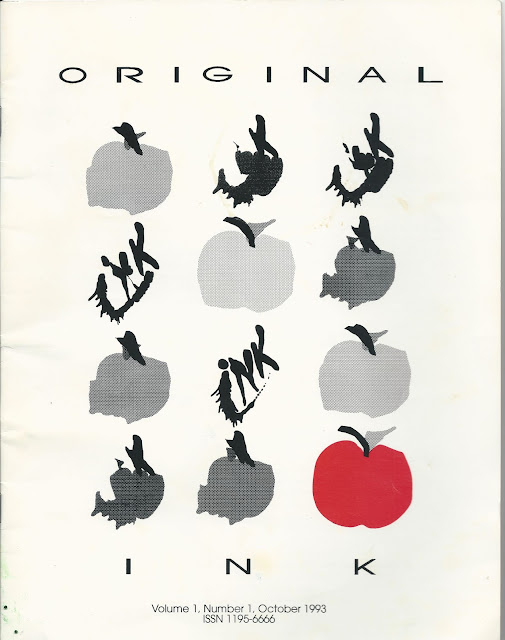 What becomes interesting on the list is numerous, from the presses I’ve long forgotten, to those that are still publishing, to those people you might not have known were involved doing literary journals or presses. Can you imagine, now, John Metcalf sitting a full weekend at a small press fair? Back when he was editor at The Porcupine’s Quill, Inc., he did just that. And where was Rob Manery and Louis Cabri’s hole magazine? I know Louis had left for Philadelphia earlier that year, but Manery was still around for another two years. It would be another year or so before John Buschek began his recently-shuttered BuschekBooks, who became one of the old standards at the fair over the following two decades. And ga press out of Montreal was doing great work! Interacting with them introduced me to a whole slew of young writers in and around Concordia University during that period, from Corey Frost’s own work to that of Judy MacInnes jnr., Stephen Edgar and Trish Salah to, eventually, Dana Bath, Andy Brown and a whole slew of others (in certain ways, the first decade or so of Brown’s Conundrum Press really picked up where ga press left off). As well, the work done since by In/words could certainly be seen as a furthering/extension of The Carleton Arts Review, as In/words emerged on campus not long after the journal finally fell apart: a publishing project directly involving and engaging Carleton University students, both as editors/publishers and writers.

The 1990s fairs saw Joe Blades and his Broken Jaw Press, Dorothy Howard with Raw Nervz Haiku, b Stephen harding with graffito: the poetry poster [see my interview with him here] and Warren Layberry with graffitifish and Bad Moon Books [see my interview with him here] but none of that had occurred yet. Not in 1994. You might not know, also, that writer and editor John Degen, who has been Executive Director of The Writers’ Union of Canada since 2012, used to co-edit Ink magazine (1992-c. 1997). Originally founded by Degen along with Sean Schwind and Brian Hill, Degen later took the journal solo and ran with his wife, Georgina, in Toronto, before it eventually folded. It was even one of our post-fair events in the small apartment I shared with Tamara Fairchild in 1996 that prompted the name of a journal I ran for a couple of years; Brian Hill managed to forget his jacket in our living room, and days later, Tamara left me a phone message: “Brian Hill from missing jacket called.” Somehow, I already thought it was the name of a journal I’d somehow overlooked, or forgotten. And with that prompt, Missing Jacket even lasted a couple of years. 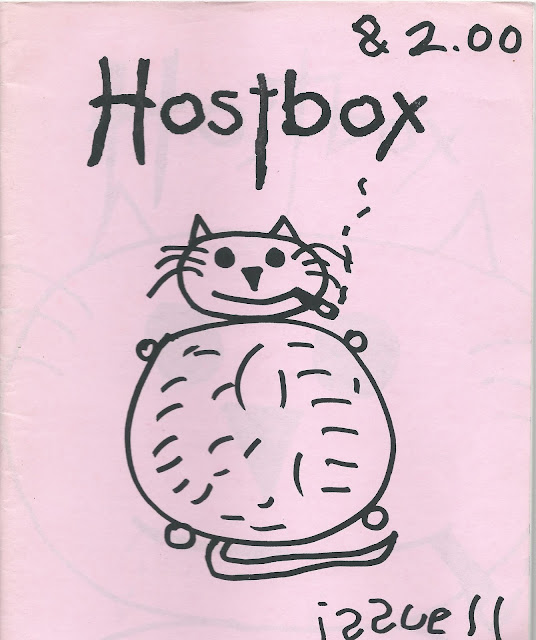 Hostbox magazine (1992-1995) was a glorious quarterly of poetry, fiction and ridiculous comics that had an enormous amount of fun attached to it, and included poetry and fiction by a number of the writers I was hanging out with during those days, including Rob Fairchild, Tamara Fairchild, James Spyker, Catherine Jenkins, Sean Johnston, Grant Shipway and jimmy s.g. ioannidis, as well as comics by P. Otis Gould (I’ve been attempting a bibliography of the journal, but no one can seem to locate issues from the first two years). As co-editor/founder Chris Pollard described Hostbox in an unfinished interview we were doing a while back, “anyway, Hostbox was an attempt to synthesize the whole punk diy philosophy with The New Yorker, which the idea to include cartoons in Hostbox was a direct lift from.”

What amazes me about that period of Ottawa literature is just how much it was all being overlooked, despite what appeared to be an enormous amount of activity for a city with limited arts funding, little book media, no provincial writer’s guild, no literary trade publishing (Oberon Press might well have existed on the moon, as far as we were concerned, given we so rarely even heard what they were up to). It was the same reason we founded the fair in the first place: at the time, I counted a dozen self-professed literary journals in Ottawa, and multiple reading series, some of which had been going on for years (TREE goes back to 1980 and Sasquatch went back to 1971, etcetera). How did we manage to get overlooked so often, and so regularly?

What has been interesting, also, has been in seeing the ongoing evolution of small press and literary writing in the city [you've seen the Ottawa literary bibliography I've been building online, yes?], with structures such as the ottawa small press fair, The TREE Reading Series and the Ottawa International Writers Festival (which began in 1997), as well as the more recent VERSeFest and VERSe Ottawa (we celebrate our tenth annual poetry festival in March), and the poetry/literary calendar Bywords.ca, have assisted in providing a scaffolding for an increasingly-engaged community of writers, publishers, printers, editors and enthusiasts. We can do anything, I know. We already are.