Lost cosmonauts and astronauts are the heroes (or, in many cases, the martyrs and scapegoats) of modernity’s mythical expeditions into outer space, figures that remain central to propagandistic portrayals of American and Russian culture, respectively. Space exploration may have given rise to certain modern myths, from conspiracy theories surrounding the Apollo moon missions to the worship of UFOs, but, like all catalysts of myth, it does not offer a set of values or ideals in and of itself.

Ultimately, humanity creates and revises semantic systems in response to shifts in culture. Born from such fluctuations, new systems will always be both imperfect and temporary. Vigorously critiquing the ever-amorphous systems we find ourselves in at any given moment, regardless of their seeming validity or completeness, remains our best defence against ignorance and exploitation. (“THE LOST COSMONAUTS”) 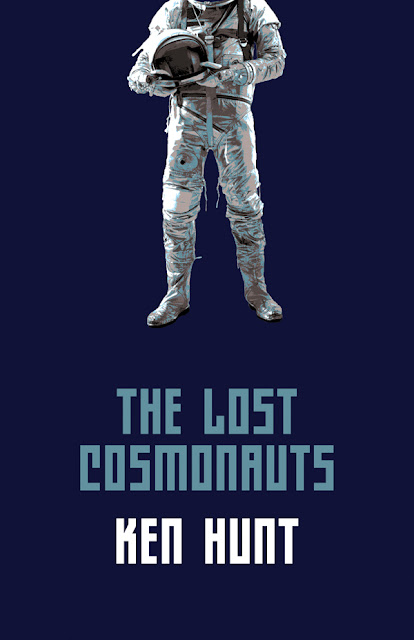 Canadian poet, publisher and editor Ken Hunt’s latest is The Lost Cosmonauts (Toronto ON: Book*hug, 2018), situated between his debut, Space Administration, published in 2014 by the LUMA Foundation, and his two forthcoming titles: The Odyssey (Book*hug, 2019) and The Manhattan Project (Calgary AB: University of Calgary Press, 2020). I’m fascinated by the fact of his two forthcoming titles, and I can’t remember the last time I reviewed a new poetry title knowing the author already had another forthcoming, let alone two. Just how active has Ken Hunt been the past couple of years to have that much work suddenly new and forthcoming?

The Lost Cosmonauts works through the space race of the Cold War, blending language poetry and constraint works and research into both history and science, from the achievements and losses that come with such a race, the political tensions and the human cost. Hunt’s pieces are detailed, thick with historical nuance and weight , and composed utilizing a language that feels entirely electric, as the opening of the poem “CRUCIBLE,” that reads: “The glazed, saline lights of tears / glint as the sea burns with mirrored stars, fires / amid sunken lies, the ghosts of dead sparks.”

Given Toronto poet Paul Vermeersch’s recent exploration through a history of astronauts and the space programs of the second half of the twentieth century in his latest poetry title [see my review of such here], I wonder if there is some kind of cultural movement afoot, as each poet responds to something that bubbles, at least for now, just under the surface of culture? In an interview posted last fall at Touch the Donkey, Hunt spoke of his work, specifically of the poems from his work-in-progress Project Blue Book:

These poems incarnate my continuing interest in writing poetry that responds to the sciences. I suppose the poems (or rather Project Blue Book as a whole) are similar to my forthcoming manuscripts (The Lost Cosmonauts, The Odyssey, and The Manhattan Project), in that each book represents a link in a kind of chain of texts that I’m in the process of producing. In addition to pursuing a PhD thesis that investigates examples of related works of poetry from the latter half of the 20th century to the present, I find myself compelled to add my own works to the canon as well, in order to address subjects that haven’t yet received the level of poetic attention that I think their continuing sociocultural impact warrants.

Out of the poetry published each year, and out of the catalogue of poetry written over the course of the past few decades, relatively few books have engaged in significant ways with scientific language, events, and ideas. Books that have done so have largely gone unnoticed, relative to books of poetry that have engaged with other subjects.

As Hunt says, that might be true, although I’m aware of more than a few poets out there that have attempted to explore science and scientific language, from Adam Dickinson to Stephen Brockwell and others. Either way, there is something fascinating at the suggestion that Hunt’s individual poetry titles connect to shape a larger kind of construct, how “each book represents a link in a kind of chain of texts,” akin to a more complex and deliberate variance of Robert Kroetsch’s Completed Field Notes or bpNichol’s The Martyrology. Given such, I’m eager to see how these subsequent titles fit into this current collection, and the eventual shape of this larger, unnamed entity.

And, if Vermeersch’s own title explores space as nostalgia, Hunt is more interested in the facts themselves, writing out a poetry that utilizes language itself to explore history and the big ideas that prompt such activity. His is not a poetry of nostalgia, but one of velocity, as a page of the third section, the sequence “Voyage to Luna,” reads:

Stirred by the sight of Apollo 8, each of the matriarchs drift to the
pantheon’s innermost chamber, where silvery thrones cast in silicon
sheathe their luminescent skin, each cold chair inlaid with magnetite murals
depicting astral wars foreign to mortal lore. Phoebe, the wisest one,
muses to her sisters: “Morals are dreamers of tragic absurdities,
destined to self-obsessed paths, their souls blighted with yearning and apathy.
We must extinguish this campaign of blasphemy, one bound to disgrace a
once-grateful people reverent of goddesses and gods alike. We once
guided the mortals; now they seek to conquer us. I’ll not forgive them this.”
“They are explorers, not arrogant conquerers,” says Phoebe’s niece, Selene.
“Violence is not their sole aptitude. Credit them for their pursuit of truth.”

Or, as the sequence “GALACTIC ENGINEERING” ends:

their arts to probe dimensions beyond sense’s doors,
the unexplored countries they toil blindly toward.