oh, but you don’t look very Indian is a thing ppl feel comfortable saying to me on dates.

What rhymes with, fuck off and die?

It’s hard to look “like” something most people remember as a ghost, but I understand the allure of wanting to know—

Knowledge, or its approximate artifice, is a kind of equilibrium when you feel like a flea in whiskey.

the old mysteries avail themselves of technique.

to hear someone say “there’s no magic left” bc I love that YouTube of Amy Winehouse singing “Love Is a Losing Game” at the Mercury Prize Ceremony and yesterday I overheard that Brooklyn means “Broken Land”—there aren’t many earthquakes in the city, but there’s the fault line of my head.

Pain is alienating, but blue breath breaking on a voice is the magic that makes ppl believe.

What, I learn to ask, does an NDN person look like exactly?

Many of my reviews over the past number of months have included the suggestion that I’m “late to the game” on particular books, and this would be another: Brooklyn poet Tommy Pico’s second full-length poetry title, the book-length sequence Nature Poem (Tin House Books, 2017), resting between his other collections IRL (Birds LLC, 2016) [see my review of such here] and Junk (Tin House Books, 2018) [ a book I haven’t yet seen]. Jericho Brown hits the nail entirely on the head when he writes as part of his blurb on the back cover that “Nature Poem is a book about our true nature.” Pico’s poem is smart, funny, darkly illuminating and filled with rage, turning in and back and around on itself as an essay-poem exploring identity and identity politics, sexuality and nature, love and loathing (and self-loathing), blending the lyric and lyric sentence with the shortform of text messages, pop culture, sex and the best and the worst of human behavior. He writes of drag queens and citizenship, music and visual art; he writes of dating and dates, and the pavement of Brooklyn, New York. As he writes near the beginning: “Gay me are the worst people ever // bc if they don’t want to fuck you, // you are nothing to them. // Yet they love dogs.”

Every date feels like the final date bc we always find small ways of being extremely rude to each other, like mosquito bites or deforestation

like I think I’m in an abusive relationship w/nature

then again I think I’m in an abusive relations w/myself, I whisper after pinching my squishy belly 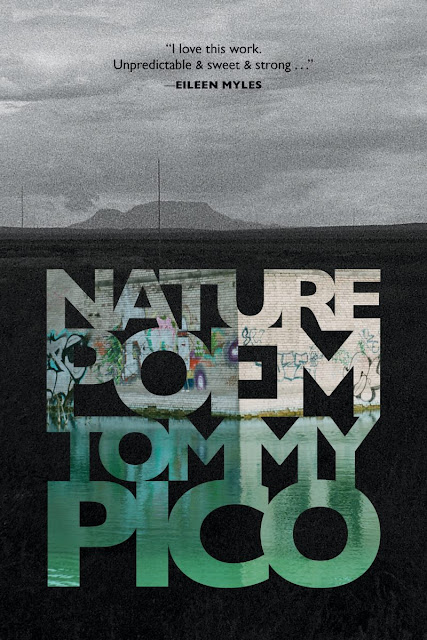 Going through the collection, I’m curious as to Pico’s influences, how he got to where he is, and wonder about the reference to the late A.R. Ammons’ (1926-2001) 1993 book-length poem Garbage (reissued by Norton in 2002) early in Nature Poem, whether included as influence or simply a play on Ammons’ title. The citation for the 1993 National Book Award for Poetry writes that Garbage “is an epic of ideas: all life—not that of human beings alone, but every species—is shown to be part of an ultimate reality [.]” Whether or not Ammons is an influence or a simple reference, Pico twists this idea completely, writing an epic, but one of the day to day, from nature to human nature, including Brooklyn streets, and repeated examples of racism, colonialism and homophobia; writing a sequence of disconnects and disconnections that can’t help but be intricately linked, as the heart hurts and the author records yet another act of dismissal or erasure, and Brooklyn is broken and the earth itself burns. “’I Said What I Had to Say’: An Interview With Tommy Pico,” conducted by Tobias Carroll and posted at Vol. 1 Brooklyn on June 14, 2017, around the publication of Nature Poem, might not provide, precisely, an answer to the structural/thematic linkages between Garbage and Nature Poem, but it does offer some insight:

Your books Nature Poem and IRL were released in relatively close proximity, and excerpts of both have shown up at various journals over the last few years. Were you working on both simultaneously? Did you find that each influenced the other to some extent?

Each book kind of sprang from the preceding one. I would hit a beat that I knew I’d have to return to later but didn’t think was in the scope of the poem I was working on. For example in IRL there’s the line (paraphrasing) “I hate nature bc every poem is like poplars, and bunch grasses, and peonies and shit!” And in Nature Poem it says something like, “I used to read a lot of perfect poems, now I read a lot of garbage/ by A.R. Ammons.” My third book Junk (coming out May 2018 from Tin House) is kind of my answer to Garbage. So while the books weren’t written at the same time, they did generate the idea for the next one. And yes, when I get time I have a fourth one planned!

As the interview continues:

Throughout Nature Poem, there’s a lot of discussion of what a nature poem is and is not, and whether or not this book falls into that category. Was that a question that first led to the writing of this book?

Because I’m a Native person, there’s this stereotype that we’re reverent of nature or whatever. I wanted to mess with that, and be like camping is dumb and fuck lakes and grass sucks. Throughout my numerous repudiations, it becomes evident that it’s not “nature” I really have a problem with (I mean you will not catch me in the woods for nothing). It’s racism, colonialism, homophobia, misogyny, etc. So the “nature poem” that the book ends up becoming is naturally just me.

So while the title and initial content of Pico’s Nature Poem might suggest something along the lines of an update on New York School poet Frank O’Hara’s oft-quoted lyric “I can't even enjoy a blade of grass unless I know there’s a subway handy” (from the title poem of O’Hara’s 1957 collection Meditations in an Emergency) but that element is almost a throw-away or a red herring; for Pico, it is simply an opening to something far larger, meaningful and complex. Pico’s casual throwaways are anything but, examples of his own meditations on his own ongoing complexity of emergencies, anxieties and conflicts, written out of the language he lives in. As Pico writes:

I can’t write a nature poem bc English is some Stockholm shit, makes me complicit in my tribe’s erasure—why shd I give a fuck abt “poetry”? It’s a container

for words like whilst and hither and tamp. It conducts something of permanent and universal interest. Poems take something like an apple, turn it into the skin, the seeds, and the core. They talk abt gravity, abt Adam, and Snow White and the stem of knowledge.

To me? Apple is a NDN drag queen who dresses like a milkmaid and sings “Half-Breed” by Cher