Deportment: The Poetry of Alice Burdick, selected with an introduction by Alessandro Porco


I always write about the places I’m in, even if it’s not explicit. I mean, it seems explicit to me, but that’s because the inside of my brain makes sense to me. Sometimes there’s just an observation to write down, but often it is a point on a path in a poem. Words are great that way—they can be very descriptive in a visual way—and they can also be cairns, places to stop on a line and gather thought, then change direction, or go down a side trail. Sometimes the place I’m in isn’t a physical place but a situation, and that’s what I’ll write about, or it connects with other places that are physical. Becoming a mother was a landscape I entered and am travelling through until I die, for example, so that often comes up in my poems. My body is a place that has changed, in how it has been received by others, and how I have thought of it, how I now think of it. The words are along for the ride—and they are always a home themselves. (Alice Burdick, “Afterword”)

Bad aim doesn’t equal
friendly fire.
In the washroom,
the graffiti says,
“Are you attracted
to his brightness,
or are you just blinded
by the light shining through
the holes in his head?”
Wisdom is a question
of hierarchy. It is
gauged by experience,
like that of abortion.
“Well, I’ve had one,
so I should know.”
“And I’ve had three,
so I know more.”
Responsibility leaks out
onto the floor, and
I could easily spend an
hour just reading.
I never carry a pen
to the toilet. 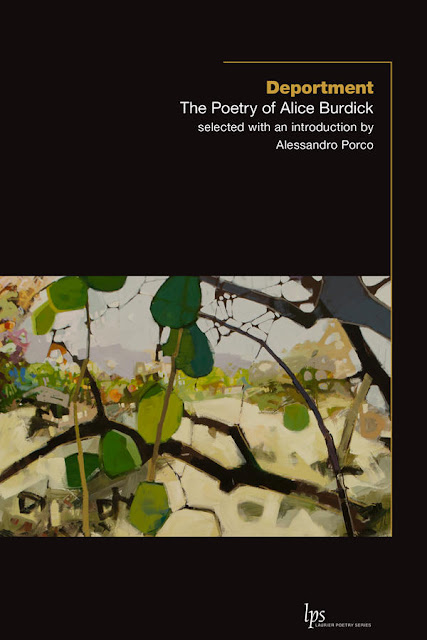 The poems, as Burdick suggests, have a way of carrying themselves, and do; a fine deportment, sketching out short lyric scenes and explorations of perception, memory and dreams. “Sometimes the motion of this time,” she writes, to open the straightforwardly-titled “For Gary,” “crosses each established line.” The strains of her more ethereal or shifting waves, from the surreal to the dream-elements, feel more tangible through her straight descriptions. If surrealist poets such as Barwin or Ross write out the impossible, Burdick writes the impossible into being.

I’ll not be Queen of the nodding men. My game isn’t their game. Their game is full of cologne bottles and runny shit. Their game is golf gone up the hill and right up the fucking tree. Not even close to the sun. If I’m wrong about this, well let me be wrong about this. The nodding men never notice dissent. My game is walking along a sidewalk and seeing the manikin hand covered in flesh-tone and plastic rings, handcuffs with bendable keys looped around the wrist. Also the dog who always sneezes. By the way, I’ll not be Queen of anything. It’s not hard to figure out why so don’t strain your brain. I stand on the corner of a street somewhere, anywhere, and soon I see the nodding men. They don’t always wear suits but their hands are always tied. (“from Voice of Interpreter”)

Burdick’s work has long been associated with numerous other poets working in similar realms, from Victor Coleman, Stuart Ross, Gary Barwin, Lillian Necakov, Gil Adamson, Kevin Connolly, Steve Venright, Mark Laba and Daniel f.Bradley, a number of whom were collected into a loose grouping of poets alongside Burdick by editor Ross in the anthology anthology Surreal Estate: 13 Canadian poets under the influence (Toronto ON: The Mercury Press, 2004). As Ross wrote in his introduction to the anthology:

Such is the range of this small anthology: there are those here who feel they are writing a pure Surrealism, and even live the philosophy, and others who absorbed their surreal content through other sources: the Burroughs wing of the Beats, magic realism, Language poetry, the New York Poets, and neo-surrealists and absurdists like Joe Rosenblatt and Opal Louis Nations.

Having been aware of Burdick’s work for as long as I have (and knowing there have been those who have known of her work far longer), it is good to see this overview, as well as what is most likely the first real critical exploration into her work as a whole, as editor Porco writes as part of his critical introduction:

Burdick’s poetry is indebted to the “non-national Surrealism” of the twentieth century: from André Breton and Paul Éluard to the Beats and the New York School, to postmodern Canadians like Joe Rosenblatt, Opal Louis Nations, and David McFadden. Dream visions, chance-based composition practices, and automatic writing are central to Burdick’s poetics. At the same time, Burdick writes in the tradition of what Rachel Blau DuPlessis calls “the analytic lyric,” a feminist twist on Ezra Pound’s logopoeia (“a dance of the intelligence among words and ideas”). The analytic lyric “leverages” the verbal hijinks and cool irony of logopoeia in the greater fight “against social and ideological structures,” explains Blau DuPlessis. The analytic lyric scoffs at the preciousness of “poesy.” It replaces ideals of beauty (e.g., the melodious phrase or well-wrought image) with diagnosis and dissent, or what Blau DuPlessis calls “discursive gear stripping.” Accordingly, the analytic lyric is always anti-sentimental and often satirical. However, in Burdick’s unique case, it does not preclude the possibility of encounters with the dead, alien, or mythical.

In the end, it is Burdick herself who has the last word, with one of the highlights of this series of critical selecteds being an afterword by the author, providing her own sense on, and approach to, this ongoing body of work as both a home and an infinite collage of possibilities. Her “Afterword” opens:

Language is a cradle. Words swaddle and make a home. People grow and words are rooms in the home we walk through and open up to others. They stack up and make shapes, and fall or are knocked down, repeatedly—and then re-form again.