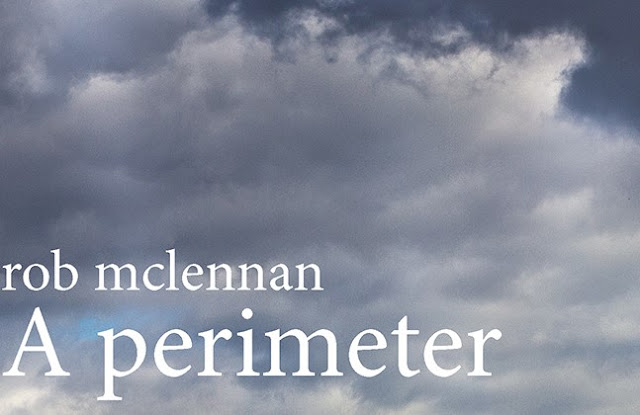 Poet and translator Ali Znaidi was good enough to provide a lengthy review of my poetry title, A perimeter (New Star Books, 2016), via Empty Mirror. Thanks so much! You can see the original review here. This is actually the second review of my New Star title, after Jonathan Ball wrote a brief review of such via the Winnipeg Free Press. And of course, you can still order copies of the book through the publisher (or me, even).

In A perimeter rob mclennan has ordered the poems which were written between 2010 and 2014 in a way that the cumulative force makes us savour those new things that have happened to him: A new daughter; Rose, a new lodging experience, and a new surrounding. This is shown from the very outset in the dedication page:

for Rose Irene Valentina McLennan,
who arrived just then,

A perimeter - poetry by rob mclennanThis collection spins keen observations and strong stories of a new father and the oppression that fills his days as he is caught between writing and fatherhood or precisely “[c]aught, between ambition and exhaustion” (page 5). mclennan’s poems are set in Alta Vista Drive in Canada where he becomes an owner of his home. Speaking to his neighbourhood newspaper, VISTAS [PDF], in its October 2016 issue, rob mclennan says in page 17, “I’m also now in an area familiar to family history: my maternal grandparents original owners of a house on Kirk Drive, a street later renamed Ridgemont. My parents married in the church across the street from our front door, and relocated nearly an hour’s drive east, near Maxville, to his home property. How do I rewrite myself into this familial space?”

A perimeter is a work of exploration and self-discovery in which the poet tries to show those changes that have appeared in his entirely new situation and their effects on his daily life and writing habits. mclennan depicts many details of his daily life through tactile references. Nevertheless, the raw problems he touches upon are universal; issues of conjugal relationships after the birth of a new child, spouse roles, struggles to do house chores, and how to find time to write, and the exhaustion and frustration that accompany all that. This elegiac fragment is but an illustrative example of his nostalgia for sufficient and satisfactory sleep: “u((n)in)t(e)rr((u)pte)d) s(l))ee)p” (page 8).

Grappling with living in the world as poet and as a new father, and despite lack and interruption of sleep, mclennan finds solace and comfort in the beauty of his new daughter. In these beautiful lines, for instance, his daughter Rose and the rose become interchangeable terms. He draws from the haiku traditions of simplicity and conciseness to tell a story of beauty. mclennan intertwines the free-verse form, which is rich with a strong narration, with the delicate short Japanese form, drawing stunning images to emphasize the beauty he is generating. At the end, Rose’s interruption of his muse engenders a newer poem that is more beautiful; something akin to the opening of a petal:


Such wonderful scraps. Rose sleeps,
she stirs, she interrupts the poem. I am crafting
a why, when. Rose unfolds, a petal opens.

In this collection, the personal intersects with his civilian life. Moving on, the poet takes a light political stance through raw imagery. While readers are immersed in the “newness” of the poet’s life, mclennan surprises them with bitterness. He says:


I see nothing new
in the whole of this country; bitter threads
(page 26)

These two lines would jolt most of us into self-critique. This time, the poet creates bitterness out of newness through effective and poignant language.

Exploration, rediscovery, and self-critique are shown from the outset of the abecedarian poem “A perimeter” in which he ponders on the new space of 1950s suburb, and focuses attention upon the issues of boundaries, location, and ownership through a well-crafted combination of poetic technique. His ruminations upon these issues are coupled with the problems of authorship and naming through language which is “impermanent.” He says in the first section, “A” :


The property boundary is handmade (shared). Fluid,
and only fluid. Unless
you know precisely where. The skin

and space of white noise (hearth). One hundred foot of fence.

Language is impermanent. We retain nothing, have no
specific form. The latent grass, explode; infect
the yard and underneath the stone-work.
(page 43)

In his book, Content’s Dream: Essays, 1975-1984 Charles Bernstein states that “poetry and philosophy share the project of investigating the possibilities (nature) and structures of phenomena” (page 220). In this regard, mclennan assumes the role of a philosopher. He attempts through plumbing psychological and interpersonal depths to show to what extent a new space or a new map can affect his world view and to what extent a new locale and shift in perspective and vision can affect his poetic craft. With mclennan and his enviable craftsmanship with language, one cannot help but relish in philosophy, while savouring the poetic language of a poet-choreographer, who knows how to make words dance on the paper. The movements are natural, measured and astonishingly sophisticated, all at the same time. In this quoted passage (page 38), for instance, one cannot help but delight in mclennan’s dancing words:

Thus, the reading that mclennan’s poetry suggests or requires is a reading that keeps on “viewing” or “seeing” the text on the paper, otherwise the reader would find the language of the poem inarticulate, obscure and meaningless. mclennan is a master when it comes to sprinkling words on the page like a masterful baker who sprinkles cumin on bread to make it delicious and mouth-watering. Hence the reader would be captivated by the layout of the poem and its visual aspects. mclennan, thus, uses the means of experimental art but for different ends: not to create a meaningless world but in order to engage readers, and especially the inattentive ones, with his poems and make them aware of what the poem can afford. mclennan’s A perimeter can be looked at as a philosophical inquiry or a treatise that draws attention to one’s adumbrated knowledge of oneself and the world by making it accessible through poetry. Through his uncanny ability to create fragmentary poetic narratives he is able to show a way of seeing/reading the world and the self in a hostile world that neither explains nor gives justifications. Another aspect of philosophy which falls squarely into the realm of this collection is the persistent quest for truth that is coupled with skepticism. Look at this philosophical inquiry which is buried beneath these two lines in page 7:


Not the event but language; laundry cycles, sediment.
Nothing settles.

In this way, and because “nothing settles,” poetry acquires a therapeutic function and serves as a constant injection against metaphysical confusions and the sedimentation and fossilization of the mind. This is achieved through mclennan’s deep awareness of line breaks and the power of the poem layout and form.

rob mclennan’s use of orthography, layout and punctuation is always innovative and especially in this collection. Part of the point, no doubt, is to create the right kind of a free zone in which the poetry can develop; besides, to let readers experience the poem as a thrilling adventure or journey. The poem becomes a narrative interlaced into the larger space of the paper with words trying to transgress borders and boundaries like “a stretch of cedar boughs” as he says in page 48. The poet’s innovative use of punctuation ramps up the tension even more and harkens back again and again to the process and craft of poetry composition. Punctuation becomes an act of transgression and a means to go beyond the fence.

A boundary creates another kind of boundary. A perimeter likewise creates its own recurring perimeters. The book, in fact, rather than offering new boundaries, is cathartic, simultaneously conjuring and exorcising the ghost of boundaries of readers with words, precisely with the kinetic energy of language. The politics of mclennan’s poetry reflects an overwhelming sense that a great perimeter was inflicted upon land and people. The poet demonstrates awareness and creates a startling experience of transgressing perimeters through the extraordinary cumulative effects of a poetics that is permeated with patterned departures and returns because, at the end, as he says on page 44:


[t]he lawn requires trim,
and so it does.

The collection reads as a series of short connected sequences, and focuses on how the perimeter, the boundary, and the fence are controlling our lives, and morphing into metaphors of the capitalistic constraints of society. The poems are both fragmentary and visual, and the dialogue between these two aspects enhances the tension and overall experience of the book. mclennan’s poetry displays a propensity towards transgression and crossing: Each Rose’s step is a poem and each poem is a step deeper into sequencing, into freedom, and into ourselves through, as he says in page 68; the last words of the book, “a task of outlines.”

mclennan’s moving collection is an exercise in reinventing one’s own body, psyche and world. The abundant metaphors are the bits or tools that mclennan gives to readers to reinvent themselves. The poems themselves become dense fragments allowing readers to assume the role of experimental collage artists whose vocation is to reshape and remould the semantic space and the world view. Rather than destroying meaning, mclennan tries to explore the meaninglessness of language not in order to annihilate it but to bestow on it an inner cohesion—something this postmodern era lacks—and to restore confidence as he says in page 14: “what shines is confidence, reduced to letter,”.

mclennan’s poetry is clearly an example for a work of art that looks for new possibilities of meaning beyond “the postmodern condition.” Containing seeds of revolutionary acts and political positions (in a non-radical way) mclennan masterfully explores the fissures in the psyche and the cracks in the walls in this hostile world of now.