Soham Patel, to afar from afar and ever really hear it


This is to inform you:

Where you are going.  To offspring your own place

for the compass needle to point—make your own

The push and the pull.  You carry a globe around:

Trace the figure eight.  Follow the way the analemma

draws the path the sun makes in the sky. Memorize

the Equation-of Time:      in the Northern Hemisphere if you

watch says it would be, the Equation-of-Time is negative—

the clock is behind the sun—if the sun is more west, the

sun.  it will tell you what month.  It shows us the sun’s

declination for every day in the year.  You can sit still

Georgia-based poet and editor Soham Patel’s managed two full-length poetry collections last year, including her debut, to afar from afar (CCM/Writ Large Press, 2018), and ever really hear it (Boulder CO: Subito Press, 2018), on the heels of four chapbooks, including and nevermind the storm and New Weather Drafts (both from Portable Press @Yo-Yo Labs) and Riva: A Chapter (kitchen-shy press). I do find it curious that neither collection includes an author biography, a rarity for poetry titles, let alone two by the same author, which might lead one to suspect this might be an author preference, allowing the work to speak without interference. 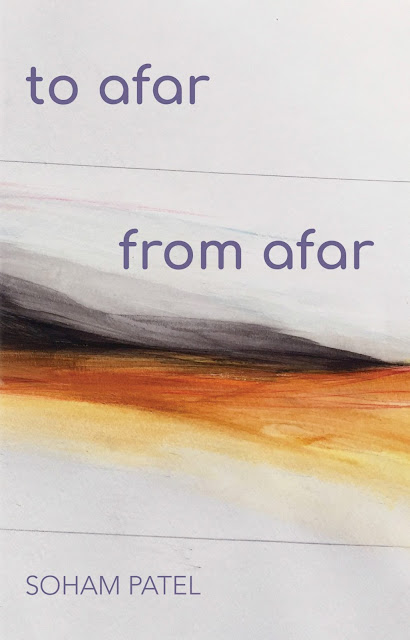 As you trace your finger over
the globe your uncle gave you
the year you were born,
you remember how he used
to call it your baby earth.
It has raised and indented
relief. Your finger trembles
when you spin it fast. Fast
like the metals spinning
past the mantle at the core.
But on this 12” replica
of where we are—with its
white-like-parchment antique
ocean—only synthetic resins
and textile fibers can reside.
You remove a line of dust.
Rolling fingerwide waves.
Recall this isn’t like those
go-where-your-finger-lands
when-the-spinning-stops
destiny kind of games.
This is for remembering
the dust trail you’re always
leaving behind and the one
you aim at errantly
like a bewildered scout.
If language can only offer
a reduction of things—
why is it years
later when you notice
it still says Ceylon, you say
nothing and keep spinning?

The poems in to afar from afar are composed as extended, linked suites, each poem connecting to the prior, and speak to attention, attentiveness and distraction. The poems speak of, against and to the distances, from geography and home to those that may have been left behind. How does one bridge such enormous gaps? There is something fundamental about how Patel writes about and around being, and the creation and self-creation that battles expectation, as well as how that being interacts with the world. She writes intimately, it would seem, of being so very far away from home. As she writes in the first section of “This is to inform you:” poems: “How to make a good husband. / How to make a good wife. How / to make all the children obey / right. To make a house hold run. ///// Flames are the place from which you came.” There is such a deep and abiding wisdom to her lyrics and prose poems, one that seeks to navigate the world and be open to all its charms and difficulties. The kind of poems that, to paraphrase Don McKay, any bird would trust to land upon.

Winner of the 2017 Subito Prize, ever really hear it is another collection constructed as an extended lyric suite, one that is built out of sentences, prose poems and incredible lyric precision. As she writes:

You walk into a room full of forgiving. Both sable and embryonic in what it knows—a room can know something clearly when the ceiling is all glazed and glitter. A sandy sort of silvergold. Pink trimmings and paint chips. I cannot speak these narratives into being. You just have to pay attention. Whatever you can afford. Listen to the same song in different volumes. There are always noises traveling in through spaces between windows and walls.

A lyric is a way of saying in some other language. Dust is nothing but skin shedding and sweep and swipe all you want it always comes back. Hands push into other hands so know breath has a music all its own—know that to have been named after a breath is one thing that can keep the people breathing. After our return: remembrance—after remembrance: you draw the curtains. I draw a bath. 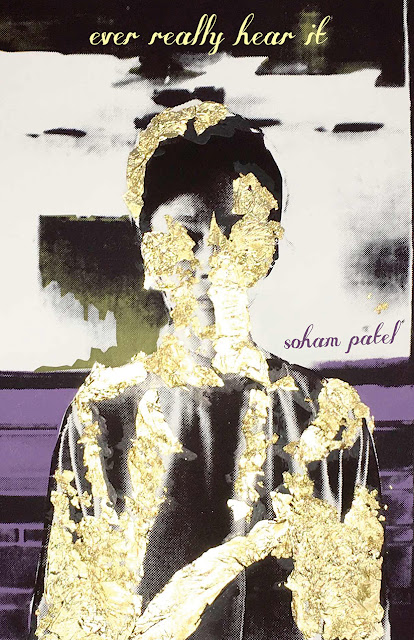 It would be interesting to know which collection was composed first, although it might not entirely matter, both titles circling each other’s orbit (akin to a binary star, perhaps), emerging almost as an unbound dos-à-dos. The parlance of Patel’s poems in ever really hear it really do feel meant to be heard aloud; her lines crackle and bounce, such as the poem “juke :,” that includes: “Gullah // came through the jukebox. / Singing. After rhymes continued. / Came loud so no forgetting now / come the grinding, come the high.” The way her poems are constructed, often title-less (utilizing the first line to indicate poems in the table of contents) is reminiscent, slightly, of the work of Kate Greenstreet, in that the poems, while they might exist as singular units or smaller groupings, they really are meant to exist in this book-length form, surviving impossibly in the wild and held together by an intricate series and sequence of threads, cadences and accumulations.

These really are a remarkable pair of poetry titles, and can be read together or apart, equally (although I would recommend both, if such a thing is possible). If to afar from afar wrote of distances and ghosts, ever really hear it exists in more immediate spaces, exploring a deep intimacy around listening, hearing and other tactile responses, as well as what could be a short excerpt that might be seen as relating to the lack of an author biography (although, admittedly, that might be me reaching for a connection that might not exist): “For the record to be a hit, / it also has to be disposable. / I have no bibliography.” If to afar from afar is a book of away, ever really hear it is a book of where she is, and is making her home. Her poems explore spaces, places and relationships, even if that relationship is but with the blank page.

I keep a leaf in this notebook. She gave it to me. In every city, morning is the same: sun and something warm to drink. A king has been born in a tupelo but queens in the mid-east keep all land full of grace. In Santa Fe, a stranger gave me a necklace—in Chicago, a kiss. Driving too late one night in Summit County the headlights weren’t bright enough to move a moose off the road—she looked up and looked me in the eyes and she grinned back. Hear vagrant harmony best when the music is turned up: all the way up to eleven if you will. What have you ever done but wondered when you could go home. Brown flares warn dancers not to step on feet but just remember every suit is sequined. I wrote down what I couldn’t say. Each word has been lifted from a book. Before I get back on the bus, a woman at the filling station asks me where I am from. I pretend I can’t hear her. Dark shades, white belt, stowed drams, in the pocket: rolling papers and a flinted lighter, practiced answers for interviews, comb, dust cloth, rose water, corrugated map of the Americas.