Robert Duncan had something to say about psychosis but I have no one to text it to. If I have no one to text things to are they interesting? If the things I find interesting are really uninteresting, then what am I? Robert Duncan said you’re psychotic once everything in your life acquires meaning. Actually, he said, at that point you’re merely “seen as” psychotic, but I’m done pretending that the way we’re seen has no bearing on the way we are.

I want to text you about illness and poetry, neither of which I could live without, and which have now been inarguably linked by Duncan. But I don’t want to put words in your mouth, so I’ll speak for myself: the poet is the person for whom everything has meaning. It is either the poetry or the illness that imbues everything with meaning, I can’t tell anymore. (“I WANT TO TEXT YOU ABOUT ROBERT DUNCAN”)

I like the combined ease and urgency of Vancouver poet and editor Aja Moore’s debut poetry collection, hotwheel (Montreal QC: Metatron Press, 2018), a book of examination, theory and first-person exploration, from violence, grief, conjecture, harm and self-harm to an experimental framework that attempts to hold as much as possible. In the poem “UNEMPLOYABLE,” she writes what might either be a statement of poetics, or simply a deliberate red herring: “Aja / on the page is always on the page / for someone else.” She continues: “Even when / it doesn’t seem like it. Especially / so in that case. I want her to stop / pretending not to care but I also / want to stop caring.” In an interview conducted by Esther Chen and posted December 13, 2018 on the PRISM International website, Moore speaks to some of her process:

I don’t remember when I first started writing poetry, but I recently found some poems from elementary school I’d completely forgotten about. It wasn’t until maybe last summer that I felt like anything remotely valuable might come out of me.

What do you think caused that switch?

I think what changed my work was that I started to learn how to write with/from the body instead of against/despite it. 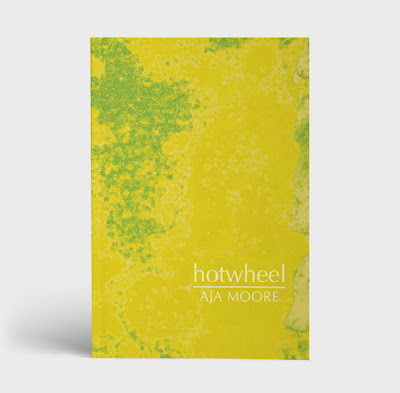 The poems in hotwheel manage a restless energy and a precision in a language comfortable in both academic theory and the shortform of texting. Moore’s poems are a flurry of movement, breathless rushes and short takes, combined to achieve a collection of smart and sharp poems. Moore writes on Sharon Olds, Rilke, Robert Duncan and Dodie Bellamy as well as exhaustion, violence, family and technology in a myriad of structures, from the extended, accumulating fragment, the straightforward lyric, the short sketch and the density of prose poems.

There is an openness to her poems, one that comes with a particular kind of fearlessness, allowing an edge, and almost a nervousness to exist underneath each piece (the anxiety I referenced earlier). Either way, part of the appeal of this wee collection is the variety of structures and purpose, as well as the assortment of seemingly random curiosities, blended into the bone of her lyric, which make me very eager to see where her work goes next. The opening poem, “AFTER I DEFINITELY CAN’T AFFORD TO STUDY W/ SHARON OLDS,” for example, moves from first-person narratives on theory to family history, loss and trauma, weaving multiple threads across the weight of ten pages, ending:

To see an inversion of my own

hopes like that    In an effort to get close to u

it seems    There is nothing I won’t