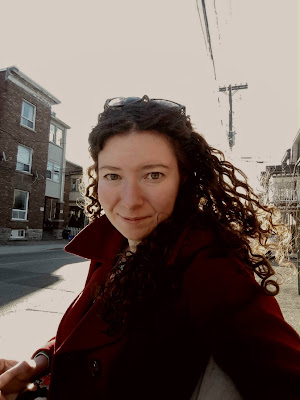 Natalie Morrill's first novel, The Ghost Keeper (2018), was recognized with the Canadian Jewish Literary Award for Fiction and the HarperCollins Canada/UBC Prize for Best New Fiction. Her poetry and fiction have been published in Canadian literary journals and included in The Journey Prize Stories anthology. She is the former Writer-in-residence for the Northern Initiative for Social Action (NISA), and edits fiction for Dappled Things magazine. She has an MFA in Creative Writing from the University of British Columbia. She lives in Ottawa.

Maybe it takes the pressure off a little – not that there was ever pressure from others, but I put a lot of pressure on myself to take my writing seriously and do work I was proud of. It was a big project I saw through to the end, and that felt really good.

The first (& recent) book, as well as the new novel I'm working on, are both historical fiction, which I'd never really done before I started my first book. I do really like the research. I hope I'll be able to shift to contemporary stuff soon enough. Sometimes it's harder getting a good feel for the shape of problems that are so immediate, though.

Fiction has always been what I've primarily read and enjoyed. I've been imagining characters and making up stories since I was a little kid. I've made tentative forays into poetry; I also like writing little vignettes of things I see and hear around me. I'm really hesitant to write seriously about my own experience, for reasons I probably couldn't articulate.

Oof, it depends. Some short projects have come out in one go, with minimal revision. For longer stories, I have to carry them around in my head for a long time. For the first book (The Ghost Keeper), I did some very rough outlining, and then plowed through a first draft, a lot of which was discarded or changed. It took, I'd say, about two and a half years between the end of the first draft and the finished version of the manuscript you see in the book (not that I was able to work on it full time). For my new project, I've done much more detailed outlining. I don't know that that's always better, but for this project, it seemed imperative. We'll see how much revision it ends up needing.

Usually when I have an idea, I can tell whether it's book-length or short-story-length. That said, a lot of my potentially book-length ideas aren't really worth investing in for that long, so sometimes I end up scavenging them for short stories.

Hard to say. A significant part of me would much prefer just to attend others' readings. But I typically do end up enjoying my own readings when I'm there – there's just a lot of wind-up and wind-down (inwardly) I'd as soon do without. It takes a lot out of me. That said, I think I do have certain responsibilities towards the wider reading and writing community, though maybe I'm still figuring out exactly what that ought to look like. And since writing can be this very isolating activity, and one which doesn't always challenge my more selfish tendencies (speaking for myself), I think it's probably a good idea for me to do readings, even just for the state of my soul.

Probably my most clear-headed answer is: It's incredible that folks would want to hear me read from a book I wrote. And I really do enjoy getting to meet readers and writers.

I think the questions are always secondary to the story, or have to arise from it – which is not to say they aren't essential, but I don't want my characters just to exist at the service of a problem I'm trying to solve. That being said, a lot of my work comes back to questions of forgiveness, faith, and living in light of mortality. Coming to terms with reality, I think. Meeting concrete, individual people, recognizing them as such, and escaping abstraction. That's a big ethical thing for me.

Could there be different roles? There's always something prophetic about it, I think – less in the sense of predicting the future; more in the sense of clearly articulating truths that might otherwise be obscure or fuzzy. Honestly, I think it's a hope-giving thing. Just to state things as clearly as possible is a service to the community. And to stop and think slowly and well, perhaps. Our world doesn't exactly nurture that tendency. It's something a writer might be able to preserve within a very rushed culture.

But simply telling stories – I hope no one ever downplays the importance of that role. That's a deeply human service, I think.

Both! Ha. That might be the clearest answer I can give without writing an essay.

About writing or life? If the former – make art about the things you care about most. If life – I don't know. Try to interpret people's actions charitably, perhaps – as in, be willing to believe they're generally doing their best.

Initially, I had to realize I didn't know how short stories worked. I'd spent most of my life with novels and I approached short stories like little novels. They aren't. They're their own thing, perhaps more like a screenplay or a poem than a novel. But it's been very educational for me to have to learn all that – you become so conscious of structure. Novels are my natural habitat, though. They tend to be far less efficiently designed, more like an old house with multiple generations of additions tacked on. Perhaps it's a presumptuous thing to say when I've only published one, but I feel very at home with novels.

Oh boy. I need to get better at this. Ideally I'd have, say, a whole afternoon to write, and I'd head off somewhere where the internet can't tempt me, and I'd go at it intensely for a few hours. But life isn't ideal, and more and more it's looking like I'll have to carve out spare half-hours between other tasks. That's easier said than done. I find transitioning between activities a bit tough. I need a lot of time to let my brain refresh in the midst of this – a substantial amount of my “writing” time is spent staring at a wall or out the window, and I wouldn't say that's time wasted. It's just how my mind works (and perhaps how most minds work).

Art of any kind is a huge one. Amazing books, yes – but sometimes something completely different, like a dance troupe, or a podcast, or a new band. Conversations with people are also very helpful – not necessarily about books, but about what they care about. Those tend to make me think more clearly and deeply. Going for a walk is the classic one that tons of folks talk about, but yes, that absolutely helps me.

I'm sure there are. Sometimes it's hard for me to articulate the connections. As I said above, music and dance and visual arts all help me think about the world and how to make art about it. I also need my prayer life, but that's a whole other thing.

Build something I could theoretically live inside. Could just be a shed. I think that would be so great.

I was headed in a biology (specifically ecology & evolution) direction for a time. Getting to do weird science like that but also spend time outdoors – that's just marvellous. Alternatively, possibly something in faith-based ministry or counselling. I've done a lot of mentoring and pastoral support-type jobs and loved those.

I don't know! Stories are so great. I always want more of them. But I'll do other things, too. I don't think I could write if I wasn't also doing other things.

Last great film – Uhhh this is where I embarrass myself. I barely watch films. (Not an “I don't have time for TV” kind of thing. I waste time constantly. It's just rare that I really enjoy a movie.) Maybe What We Do In the Shadows (2014). That is a delightfully re-watchable movie.

Posted by rob mclennan at 8:31 AM
Labels: 12 or 20 questions, HarperCollins, Natalie Morrill