Away from a relative plane of table conversation,
The last forks and spoons resume a familiar
Progression, clattering the sink’s tin basin in time
With Aunt Ange’s O! no! oblivion. Laugh tracks
Wrangle down the hall, jingles clump, APPLAUSE
Lights up – cues an interlude of who’s on sale –
Have it your way right away be all you can be just
Do it. Soon it’s static. So the drowsed
Shuffle off to a continent of sleep; they will retire
There, trim some hedges, craft umbrellas, maintain
A permanent muzak. Like that, a pulse of snores
Crowds the house, then shush, they scatter once
The windows inhale – through, over the tree peaks –
Out, aimless away, over Susquehanna. (“O, OR, PLAINS, PENNSYLVANIA”)

Montreal-based poet and critic Michael Nardone’s second full length collection, following Transaction Record (Gauss, 2014), is The Ritualites (Toronto ON: Book*hug, 2018), a collection self-described as a “book-length poem on the sonic topography of North America. Composed at sites all across the continent—from Far Rockaway to the Olympic Peninsula, Great Bear Lake to the Gulf of California—the book documents the poet’s listening amid our public exchanges, mediated ambiances, and itinerant intimacies.” And while I love the nuclear green text radiating on a bright orange cover, it does (for me, at least), make the text on the back of the collection entirely unreadable. In an interview conducted by Book*hug intern Mary Ann Matias and posted on the publisher’s website, Nardone speaks to the process of conceiving and constructing the collection:

As opposed to narrating an event, I became fascinated with constructing ways to situate the reader in the event’s midst – as an active listener attending to that situation’s complex polyphony. I became interested in exploring the idea of voice, of voices, of vocality, of the apparent sense of immediacy one feels in listening, and, then, in constructing into poems the variety of ways those voices and that listening is mediated. So, The Ritualites is a product of these initial studies and experiments in listening, in transcription, in resonance.

The Ritualites, then, situates itself as a book of deep listening across a wide swath of North American geographies, something Divya Victor reinforces in her brief introduction:

Michael Nardone’s poetry unsettles territories as it roves through the continent, documenting the neon signs and the billboards, the dinner table conversations, and the overheard terrors of everyday Americans. The book orchestrates unlikely and compelling movements between abstract, parodic narrative and lyric elegy, which Nardone writes as modulated, cerebral laments for an era’s failure to reach utopia. […] My hope has always been for poets to subscribe not to movements or schools of aesthetics, but to be the bearers of urgent form—form as a thing to be broken and held close, at once. 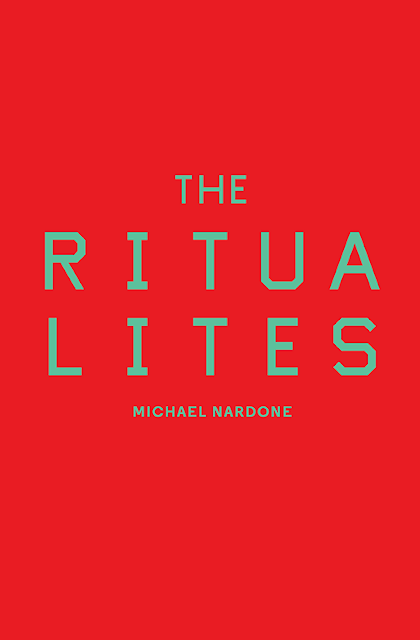 There is something fascinating in how Nardone’s work concurrently works through highly formal poetry structures and a post-language lyric, experimenting with structures and cadences familiar to the work of, say, Stephen Brockwell, just as much as KSW writers such as Colin Smith or Jeff Derksen. One can see it in “O, OR, PLAINS, PENNSYLVANIA,” the twelve-poem sonnet sequence near the beginning of the collection, or further on, as Nardone writes: “Am kiddin / Come on / Get over here / Everyone waitin for ya / Me and Dan / And there’s a band / Playin Stairway to Heffin / Knew that’d getcha / Seeya on the patio / Bye babe / Wooh” (“TOPOLOGIES/OTOGRAPHIES”).

What does our overheard conversation say about us? And what do the snippits transcribed say about Nardone? There is an urgency to these poems, one that attempts both an order and the acknowledgment of a lack of that same order, shifting back and forth throughout. Occasionally, Nardone infers that his is a project of listening without any sort of editorial agency, and other times, entirely inserting himself, shifting and projecting, and offering what and how he wishes you to engage with what he has gathered.

As you read this book, try to stand apart from your self.

You are not your feelings.

You are not your thoughts.

As you read this, notice what information you receive, and by notice I mean: simply observe.

You deserve to feel great about your life.

Try to project your consciousness into the corner of this room and see yourself, there, in your mind’s eye, reading this book.

Can you see yourself almost as though you were someone else? (“UNFIXED TERRITORIES”)