HE SPEAKS VOLUMES: A Biography of George Bowering, by Rebecca Wigod


When he began writing poems at nineteen, he soon found a voice and manner that appealed to publishers. It was the fifties. Poetry was becoming popular in North American, and a postwar vogue for “little magazines” was creating ever more outlets to spread it around. In Vancouver, where he started going to university in 1957 to complete his bachelor’s degree, George was part of a community of young poets. He has written about walking through Kitsilano then and hearing “all along the summer street the typewriters at the open windows.” Later there were plenty of poets – and visual artists, too – in the hippie-era Kosmic League in which he played baseball. In 1974, his two-year-old daughter, Thea, sat on his knee after a game. With them were two artists who’d played on his team: Brian Fisher and, visiting from Ontario, Greg Curnoe. George pointed to Brian and told Thea, “He’s a painter.” He then pointed to Greg and said, “He’s a painter.” Thea pointed to him and said, ‘You’re a poet.” He loved that.

I can’t imagine anyone who knows me at all not aware that I’d been looking forward to the publication of HE SPEAKS VOLUMES: A Biography of George Bowering, by Rebecca Wigod (Vancouver BC: Talonbooks, 2018), a volume that, I should note, she did interview me for, during her time in Ottawa researching at the National Archives of Canada (she was startled to realize her short-term rental was mere blocks away from our wee suburban house). The intimate and thoroughly-researched HE SPEAKS VOLUMES explores some eight decades of Vancouver writer, editor, publisher, critic, historian, baseball fan and general troublemaker George Bowering’s life so far. Over the course of some three hundred pages, she provides an overview of a writing life that has generated one hundred trade books of poetry, fiction, history, young adult fiction and essays produced to date, as well as details on his time teaching, his family life, baseball, TISH, various controversies and his tenure as Canada’s first Parliamentary Poet Laureate. Wigod, a former journalist with three decades’ worth of experience, seems to have followed Bowering’s lead from his own explorations of history: working an entirely readable, and deceptively casual, take on Bowering’s life and work. Having seen my way through a number of biographies over the years—with highlights including biographies of Robert Creeley, Richard Brautigan, Robert Duncan and even (yes) Jim Henson (reading Henson’s before the Greg Curnoe biography made the Curnoe text read thin)—Wigod’s holds as a strong contender against the rest, providing a fascinating overview of Bowering’s life.

Since he gave his okay, much of what I’ve learned from reading his books and diaries, visiting him at his West Point Grey home (notable for its cleanliness and order, even though he and [Jean] Baird share it with a big furry dog), talking with him more than twenty times, and interviewing his relatives, friends, former colleagues, students, and sandlot baseball buddies, has surprised me. I hadn’t known that he reveres the English Romantic poet Percy Byshe Shelley, especially his Ode to the West Wind and Adonaïs elegy, or that he considers himself a direct literary descendant of Gertrude Stein, William Carlos Williams, Ezra Pound, and H.D. – all born in the United States in the late 1800s. It has never fazed him that, except for Williams, they’re notoriously hard to read. He likes abstract painting more than representational; he has plenty of time for the composer Arnold Schoenberg and his atonality; he prefers squawky free jazz to the kind that makes good elevator music. He’d rather read novels by John Hawkes and Jerome Charyn than those receiving stamps of approval from Oprah Winfrey and Heather Reisman. In his view, literature should keep breaking new ground. Stein’s prescription for writers – “If you can do it then why do it?” – has become his credo. (“CHAPTER 1 – MR. PROLIFIC”) 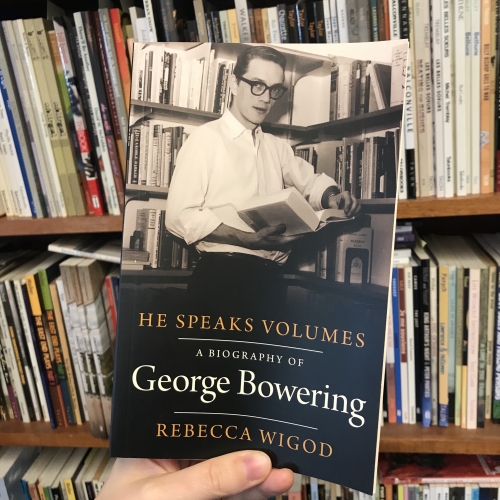 What makes Wigod’s biography so interesting is in its accessibility, able to bring even the most casual reader into a world of writing that is still ongoing; and the general reader seems very much part of the intended audience for this volume, unlike, say, the Robert Creeley biography. Another intriguing element is how Wigod manages to tell the story of Bowering’s life and work via two distinct structural threads, working a temporal linearity as well as a series of chapters focusing on a particular subject. While earlier chapters are titled “The Boy” and “The Youth,” further chapters focus on different elements, from “The Husband,” “The Professor” and “The Father” to “The Poet,” “Mr. Baseball,” “The Novelist” and “The Amateur Historian.” Part of why I appreciate the wisdom of Wigod’s structure is in knowing just how complicated the many overlapping threads of Bowering’s writing and life could be to arrange, with multiple book-length projects produced concurrently.

For myself, as a long-time Bowering enthusiast (fan, I suppose), there wasn’t much here that I wasn’t already at least a bit aware of, but the details I might have missed or not been aware of were appreciated. While I might have been aware of certain stories, I did appreciate discovering what I hadn’t known, including his more recent forays into historical non-fiction, moving through multiple volumes of Canadian history. There might come a point where a literary scholar does produce a huge and far heftier volume on Bowering’s life, and I think part of my frustration with this particular title was the difference between what this book is against what it wasn’t attempting to be: a scholarly title three or four times its size, one that deals with every title, and every aspect. For example: I would have been curious to know more about Bowering’s collaboration with Ryan Knighton that produced Cars (Coach House Books, 2002), or on his poetry title Genève (Coach House Press, 1971), or even further details on his interaction with Montreal poets during his time there, such as Artie Gold and others of the Vehicule Poets.

Comparing Bowering to Creeley does feel apt, in that both writers are predominantly known as poets, and known as writers who engaged with far more of their contemporaries than most; known for publishing widely and prolificly, and influencing innumerable writers in their wake. Both volumes, too, were produced while their subjects were roughly the same age (although one might say that Creeley had lost far more peers by the time his book appeared). The difference in approach to both volumes is obvious: one by a journalist for a more general audience, and the other by a literary scholar for a more literary audience. But I wonder if a factor this difference in approach might also be one of country-of-origin: both venerated and established senior writers, but the Creeley volume wrote on an already-known quantity, while the Bowering volume, while detailing the work of a writer equally venerated, works instead to establish him to the general public. Is this a book, comparable to similar biographies of Greg Curnoe and bpNichol, instead working against “Canadian tradition” to establish artists who would, south of the border, be more widely appreciated?

Either way, I shall proclaim: this is an impressive biography, one that is well-researched, thoroughly readable and cleverly arranged, and one that deals with its occasionally larger-than-life subject with honesty, curiosity and enthusiasm. Who could ask for anything more than that?