In that way look in that way

In that way there where

the centre of our attention

After years of itinerant publishing through small and smaller venues, Edmonton-based poet and critic Christine Stewart’s long-awaited debut is the book-length essay-poem Treaty 6 Deixis (Vancouver BC: Talonbooks, 2018). While this might be her full-length solo debut, Stewart is also the author of a full-length collaboration with Toronto poet and editor David Dowker—Virtualis: Topologies of the Unreal (Toronto ON: BookThug, 2013)—and an incomplete list of her chapbooks would include The Barscheit Horse [with Lisa Robertson and Catriona Strang] (Hamilton, ON: Berkeley Horse, 1993), A Travel Narrative (Berkeley Horse, 1994), Daddy Clean Head (Vancouver, BC: Lumpe Presse, 2000), From Taxonomy (Sheffield, England: West House Press, 2003), Pessoa’s July: or the months of astonishment (Vancouver, BC: Nomados Press, 2006), The Trees of Periphery (Edmonton AB: above/ground press, 2007) and The Odes (Nomados Press, 2015).

On this river – North Saskatchewan

Will and welcome as the day which when that sun shines 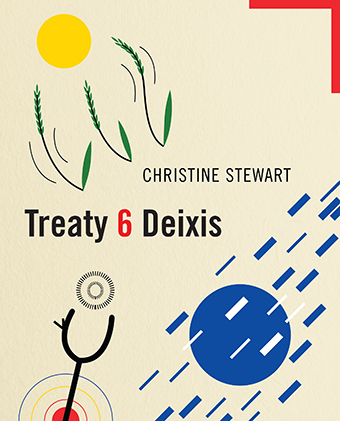 Composed in fragments and short bursts, Treaty 6 Deixes is a poem that engages with the people and the place of what is now known as Alberta, and the river valley that snakes and rolls through what is now the City of Edmonton, exploring an engagement with not only the people and the place, but an agreement between peoples, one that has been regularly and repeatedly broken, battered and mangled by the Crown. As the back cover to the collection informs: “Deixis, from the ancient Greek noun for ‘reference,’ means a word or phrase – ‘this,’ ‘that,’ ‘now,’ ‘then’ – pointing to the time, place, or situation in which a speaker is speaking, or a writer is writing. Written beside the kisiskâciwani-sîpiy (North Saskatchewan River) on Treaty 6 land, which encompasses most of Central Alberta and Saskatchewan, this long poem reinstates and resounds the extent of the author’s obligations as a settler, considering the ways that language might be formally and contextually engaged to re-situate us in the world.” To open her “TREATY SIX FROM UNDER MILL CREEK BRIDGE” from the anthology Toward. Some. Air., edited by Fred Wah and Amy De’Ath (Banff AB: Banff Centre Press, 2015) [see my review of such here], Stewart writes:

In “Treaties Made in Good Faith,” Sharon Venne, Cree scholar and lawyer, rejects the Government version of Treaty Six: the Indigenous Nations of that territory never surrendered their land, their governments, their legal systems, their children, or their lives. Venne’s understanding of Treaty Six comes from her Elders, who have spoken to Venne, and who have cited the Elders who negotiated with the Commissioners at the signing of the Treaty, in 1876: “We are not selling our land. We cannot sell our land … We have a relationship with the land. The Creation placed us here on Great Turtle Island and this is our land. However, we will let you live on our land.

That is, as the Elders explain it, the only way non-Indigenous people and their communities can inhabit Indigenous land is through the Treaty agreements. Which is not to say that non-Indigenous people (Canadians) don’t belong here,rather that we are here because of agreements that bind us (inexorably) to the Indigenous Nations and to the land, and that all Canadians are required (by law) to honour those agreements as they were originally intended, to know their Treaty rights and responsibilities: “to live in peace, to share resources: some of the land, some of the wood, some of the ground so that they can live on and respect the land.” As I understand it, in territories where there are no Treaties, it is our role to understand what negotiations are in place and to ensure that sound agreements and good relations are made and upheld so that we can fulfill our historic commitments to the Indigenous Nations.

Stewart, who arrived in Edmonton in 2007 from Vancouver to join the faculty of the English and Film Studies Department at the University of Alberta, composes a poem very much on the foundation that it is everyone’s responsibility to know and understand the treaties that make up so much of our country, and to know precisely what the settler responsibilities of those treaties actually are. In many ways, it feels as though this is the project that Stewart has been working on since she landed in Edmonton, attempting to fully and respectfully understand and engage the landscape upon which she has become a small part.

While immersed in this

Their patience has been exhausted

The enemy is ahead

Treaty 6 Deixis explores how to ethically exist in and engage with such a people and place. Where Ottawa poet Shane Rhodes turns archival settler language against itself in Dead White Men (Toronto ON: Coach House, 2017) [see my review of such here], or even the language of treaties in X (Gibson’s BC: Nightwood Editions, 2013), Stewart’s Treaty 6 Deixis writes more immediately of her surroundings, the space bound to and by Treaty 6. Constructed as an accumulation of short fragments with an endnote, her short, incredibly precise sketches are surrounded by an enormity of both silence and white space, pointing very deliberately with a strong finger; writing and pointing, here, here, even as her “Endnote” writes of the difficulty of this very writing:

Treaty negotiatons How to understand what those obligations are How to

To further this, her afterword, “TREATY 6,” opens:

Posted by rob mclennan at 8:31 AM
Labels: Christine Stewart, Talonbooks