A CEMETERY FOR HOLES, poems by Tom Prime and Gary Barwin

I move to the Vancouver airport.
the plane is always one hour and forty-nine minutes late.

that hour and forty-nine minutes
because a room I build

out of a billion toothpicks.
the world changes with the shifting

of the magnetic poles. cigarettes smoked
by the rain, the fumes of forest fires.

inside my toothpick house, I’m a kind of joke
like fighting the war on drugs.

every thousand years,
a little bird flies over my toothpick house,

carries a phone charger in its beak.
am I a bag of toffee? Am I bark on a dead IV-tree?

the clouds evolve when they have occupations. (TP)

I’m always fascinated by literary works that exist in conversation and/or collaboration, from the straight collaboration, to poems that exist, whether combined or as separate projects, in conversation. One of the first titles through Gordon Hill Press is A CEMETERY FOR HOLES, poems by Tom Prime and Gary Barwin (Gordon Hill Press, 2019). This is a first trade collection for the London, Ontario poet Prime, but one of multiple collaborations that Hamilton, Ontario poet, composer, visual poet and fiction writer Barwin has been involved with over the years, with trade collaborations including Frogments from the Frag Pool (with derek beaulieu; Toronto ON: The Mercury Press, 2005), The Obvious Flap (with Gregory Betts; Toronto ON: BookThug, 2011), Franzlations: the Imaginary Kafka Parables (with Craig Conley and Hugh Thomas; Vancouver BC: New Star, 2011) [see my review of such here] and the collaborative novel The Mud Game (with Stuart Ross; The Mercury Press, 1995), as well as a recent chapbook-length collaboration with Alice Burdick, PLEASURE BRISTLES (Ottawa ON: above/ground press, 2018). I know that Barwin has a selected poems appearing this fall, but it would be interesting to possibly see either an extended critical study or a selected that focuses specifically on Barwin’s collaborative works, for the sake of both his range, and his potential evolution. As Barwin writes in his “Notes” at the end of this new collection:

One of the things that I love about collaboration is that an integral part of the process is defining what that process is, to consider what collaboration is, what it could be. Often, as in this book, it evolves as the work evolves. We wrote many of the poems as a dialogue. Tom wrote a poem and then I’d respond with another. Then Tom would respond, and so on. Finally, we wrote several poems together, connecting on Skype and, using a Google doc. We both wrote and revised in real time, often at the same time, discussing our thoughts as we wrote, and changed each other’s words.

Because Tom addresses intensely personal experiences both biographical and traumatic in these poems, I constantly considered my role as a collaborator. Collaboration is conversation, and I imagined myself entering into that dialogue as an ally, a listening, as someone paying close attention, thinking through, as someone considering the poetic, aesthetic, political and social aspects of Tom’s poems and trying to add something useful, authentic and interesting to the discussion. As someone trying to understand and hear, as a sensitive reader of the poems, but also as someone outside the experience. I also considered my own experiences with trauma, my own sense of how language responds, how language is complicit in power structures, how it breaks apart, reforms, fractures and, like water, always finds a way to flow through the cracks and fragmented places and find new possibilities. How we are in this language together. 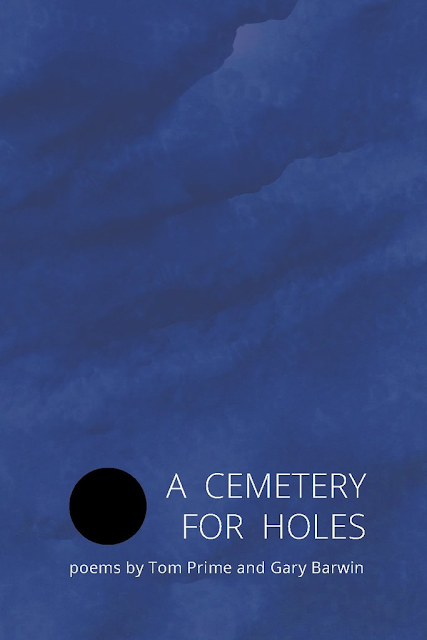 What becomes interesting is seeing how the poems evolve throughout the collection. The poems begin as individual pieces that respond to each other, from Prime to Barwin (with author credits existing in the table of contents), but slowly turn into each other, becoming more difficult to distinguish (despite those credits), until the final few pieces are composed by both writers. On the surface, one might suggest that Prime leans into surreal imagery and Barwin leans into trauma, but the results are more complex than that. There is an intimate sense of dark and light that run throughout, from a dark humour to surreal twists. Throughout the collection, the poems begin to change physically as the two writers intertwine, poems that begin to pull apart physically, stretched across the canvas of the page. Given this is Prime’s first full-length publication (apparently the two met during Barwin’s tenure as writer-in-residence at Western, where Prime was, and still is, a student), I would be interested to see where Prime’s work continues, beyond A CEMETERY FOR HOLES, and how his experience collaborating on this collection might influence his further work. As Prime’s own “Notes” at the end of the collection read:

A lot of my poems have to do with sexual trauma, mainly from my early childhood, but also during my homeless life as a hitchhiker. Less interested in describing the sexual trauma in detail, my work seeks to undermine social conventions of what it means to be a survivor of sexual assault. People with sexual trauma are often portrayed as melancholic souls who should be pitied. A Cemetery for Holes posits a reimagining of what it means to be a victim of sexual abuse, suggesting there is no right way to process the experience. The poems are interested in finding alternative avenues to realistically live with trauma, knowing that the wound cannot be completely repaired, knowing that the power of writing is limited by imagination. And yet the imagination should not be underestimated: in addition to exploring the concept of victimhood in contemporary society, the book considers capitalism, religion, and other systems of oppression.