When I arm myself with rationality, realism chastens me into myth. Disabused by the raced men arrested post-race, full-on reality numbs. White knights brave a world that I read about; they snob at begging, snub at journalists. Money remains my headmistress. Though I work my mind, a white-enough body’s work’s exponentially more valued, so for what share pen I my thoughts? Fair, seldom fair-wheeling, trade socializes bidders’ international dominance zeal. Our spills’ grim images don’t slow the jealous brands. Gatekeepers smugly redirect poop-seeing eyes to squalid things opponents wish to hide; I look with niggling soul on dark insides. So what? I’m chastened afresh. Race-blindness doesn’t see the somatic in the visible. The rational mind says soul is imaginary—but what insight presents itself clothed, styled, fashioned according to uptown admen? Why does light lessen the view? Why did lieblichs ever liken a Jewish girl to—An intelligence hunts, languaging, chastening. Lonely nights make subdued lacks dawn; bright blazes the author’s righteous candour. Her bold-face not-news plows through disabling pity, daily misogyny, life’s male bias. By knighting my mind I form a third person, pleasing gods. As for myself, I cannot quit Sonnet’s effing odds.

In the works for some time has been Vancouver poet, editor and critic Sonnet L’Abbé third full-length poetry title, Sonnet’s Shakespeare (Toronto ON: McClelland and Stewart, 2019). Given the comparatively more traditional lyrics of her first two collections—A Strange Relief (McClelland and Stewart, 2001) and Killarnoe (McClelland and Stewart, 2007)—the conceptual framework of Sonnet’s Shakespeare is quite a shift in approach, even in just the fact of her lyric not as an end, but as a means to open up an entire range of possibilities and considerations. The poems of Sonnet’s Shakespeare deliberately work to expose the limitations of the canon of English Literature (specifically one that doesn’t evolve), and the liabilities of leaning too heavily on such a single element. Expanding, overwriting and writing between and around Shakespeare’s lines (literally subverting Shakespeare’s intents and purposes), L’Abbé turns each of the immortal bard’s one hundred and fifty-four sonnets into something far more culturally relevant, subversive and explosive. As part of her “Spotlight,” posted in February 2017, she wrote as her statement on the project, then still a work-in-progress:

North American contemporary poetry has seen a recent surge in poets practicing erasure poetry, an approach in the avant-garde collage tradition, where the poet takes another writer’s text and “writes” by deleting words from the original until a new poem remains. The most pertinent example for the purposes of framing my work would be Jen Bervin’s 2004 book Nets, which she made by erasing words/letters from Shakespeare’s Sonnets.

The author in erasure practice has been compared to an editor, to the pruner of a shrub, and to one who “opens” the text to “ventilate” it. I think erasure practitioners can also be compared to censors, to deleters of authorly expression. Like-minded Canadian poets nourbeSe philip, Shane Rhodes and Jordan Abel have all used erasure (on legal documents as well as other writers’ texts) to allegorize the censorial practices of colonialism.

But another strategy colonizers have used, besides attempting to eradicate extant cultures, is to reframe the stories of colonized people, to “talk over” existing voices so loudly that the cultures are, at important levels of voice, silenced. Though colonizers often nearly destroy the legibility and foregrounding of the presence of original cultures, they are never fully successful at erasing the original cultures they mean to displace.

I am similarly successful and unsuccessful when I write, from the perspective of both colonizer and colonized, over the “traditional territory” of English literature and attempt to impose upon it my own descriptions of the world. This is a different mode of erasure, a palimpsestic mode, one that hides the original text in plain sight, and attempts a muted bivocality in the reading experience. The original poem exists in its entirety on the same page, but reading it requires a cultural knowledge that remembers what to look for. 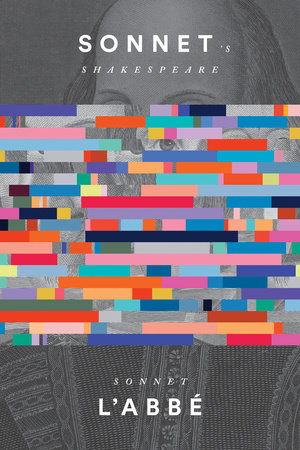 Sonnet’s Shakespeare is expansive, playful and wonderfully vibrant, wholly ambitious and incredibly precise. Through writing out a process of expansion, L’Abbé subvert the erasure form (itself a process of subversion), working in the exact opposite direction, managing to breathe new life into a form that has seen many examples over the years, but few real advances or surprises. Works by M. NourbeSe Philip, Shane Rhodes and Jordan Abel, as she mentions, are obvious exceptions, and of course, American poet Caroline Knox did do a “reverse erasure” in her 2008 Wave Books title Quaker Guns, composing the poem “Source Text,” as though it the “source” from which E.E. Cummings might had built his poems “SONG VI” and “SONG VII.” (one could also speak of Gregory Betts, who developed term “plunder verse,” which is an erasure variant under a different name). L’Abbé, for her part, uses the expansive, “reverse erasure” form to explore matters of the canon, race, identity and colonialism (which Shakespeare’s work, taught throughout the world while ignoring home-grown literatures, has become impossibly intertwined). As she writes as part of her 2016 Touch the Donkey interview:

Its procedure is an allegory for colonialism: I write from the perspective of both colonizer and colonized, “over” the “traditional territory” of English literature (Shakespeare’s text) and attempt to impose upon it my own descriptions of the world. The process is a mode of erasure that works by overwhelming rather than excising, one that hides the original text in plain sight, and attempts a muted bivocality in the reading experience. The original poem exists in its entirety on the same page, but reading it requires a cultural knowledge that remembers what to look for.

I’d already thought her lyric shifts from her debut to sophomore collections were more in line with what I was seeing in collections by publishers of more experimental works (over, say, the flavour of titles long published by McClelland and Stewart), as L’Abbé twisted and twirled the language in expressive and playful ways—less a lyric line than a pulsing reverberation—and this book continues that sense of lyric sound and movement, almost as though McClelland and Stewart, in part through bringing in Dionne Brand as poetry editor, had to catch up to what L’Abbé was already doing.

Thanks so much for this thoughtful piece. I've got a concern and I'm not sure what to do: since mid-2017, I've really done all I can to not repeat the language you've sourced for this review. I can't take back stuff I said, but I haven't said it for two years for strong reasons. My thinking has changed since 2017, and I'm still learning. I cringe to read my own words now, though it makes total sense that you refer back to them.
In these quotes from 2016 and early 2017, I speak about the ways I was conceptualizing writing back and writing over, and my sense of trying to use and dismantle what Lorde called the master's tools. I no longer speak about the book as above, because I make no distinction between extraction colonialism and settler colonialism, and I refer so problematically to the privileged and marginalized ways I inhabit a settler colonial state.
There was a time when I thought that the impulses behind dismantling the English lit canon and exposing white supremacy brought me firmly into shared understanding with a broadly conceived BIPOC community, but this project has led to conversations with many writers that have helped me understand the different aims, and sometimes incommensurability, of social justice aims and decolonization. As Eve Tuck and K. Wayne Yang put it: "... colonial subjects who are displaced by external colonialism, as well as racialized and minoritized by internal colonialism, still occupy and settle stolen Indigenous land. Settlers are diverse, not just of white European descent, and include people of color, even from other colonial contexts. This tightly wound set of conditions and racialized, globalized relations exponentially complicates what is meant by decolonization, and by solidarity, against settler colonial forces."
In speaking about the work as above, I have hurt and offended people and put people in the position of having to explain my presumption and ignorance. I take responsibility for speaking about my process, and acknowledge the insensitivity I put out there. I hope it is the work itself that best speaks/attempts the grappling I do. I now understand this work as a grappling with how to speak in English about being a Black, South Asian and Franco-Ontarian/Québecois person who has been educated by a Canadian system, while searching for the community I speak to and am accountable to, and asking how to responsibly take up space on the land I'm on. Thanks.