History is a song, a cruel anthem
my nameless lovers mouth all the words of.
Confession: I rarely survive the night
in the biome of a man’s longing. What
has been lost doesn’t ask to be unlost.
Love’s work is always slow, painstaking. We’re
allowed forgetfulness. Men I fuck don’t
believe people can rust. I’m not unique.
Memory? Pardon the melodrama –
it’s raining again in the apartment.
Funny how suddenly the body turns
into a Canadian monument!
I’d rather be a bird. Do birds grow sick
of the exploding sky would NDNs?

On the heels of his Griffin Poetry Prize-winning debut, This Wound is a World (Calgary AB: Frontenac House, 2017), Driftpile Cree Nation poet Billy-Ray Belcourt’s latest is NDN Coping Mechanisms: Notes from the Field (Toronto ON: Anansi, 2019), a collection of uncompromising poems, erasures, photographs and prose poems that blend camp, theory and lyric to examine unexamined, and some extremely difficult, histories, and those histories not discussed enough through mainstream media. “I wrote a poem to resemble a forest floor teeming with decaying vegetation.” he writes, to open “ARS POETICA,” “A struggling thing isn’t a struggling thing / if everything else is in a state of rot.” 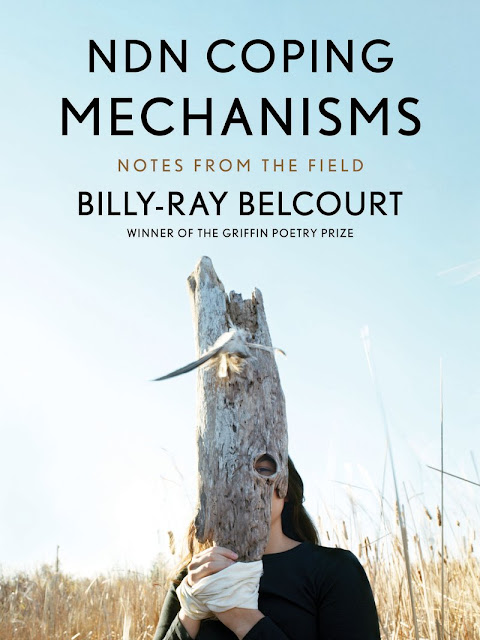 What is fascinating is in how Belcourt utilizes poetry (over, say, critical theory, creative non-fiction or fiction) as the form with which to engage his field of study. In an interview conducted by Sanchari Sur earlier this year for the Invisible Publishing blog, he responds: “The first reason I came to poetry, I think, was because I was frustrated with the limits of conventional academic writing. As an undergraduate student, I was going through this process of politicization that I think a lot of students of colour go through… [it] brings about a kind of fury [laughs], and pain and sadness that many of us want to put to use. And poetry was where I did that because it allowed me to write and to theorize from experience.” He continues:

So, the next book – NDN COPING MECHANISMS – is amongst other things, a critique of Canada and the structures of complicity that many are mired by. It speaks to the ways in which the suffering of Native people is very much entangled in the daily lives of Canadian citizens, and there needs to be a remapping of terrains of social violence to get at the ways in which many contribute to the normalization of settler colonialism. And, I think that that kind of intellectual undertaking is in itself running counter to CanLit… I think what we are facing – ‘we’ as in marginalized writers like queer, Indigenous, people of colour – is an older version of CanLit, that had to do with a national myth of Canadian life. It reminds me of this [Antonio] Gramsci quote that Dionne Brand cited in a talk once: “The crisis consists precisely in the fact that the old is dying and the new cannot be born; in this interregnum a great variety of morbid symptoms appear.” I think we can see these symptoms everywhere in the literary world. And perhaps, this generation of writers – that includes myself – have the unfortunate task of weathering these symptoms as well as championing and bringing forth the new. We don’t entirely have the option of opting out of the old – that’s where a lot of resources and capital flow through –, but that does not mean that we should give up on the construction of alternative literary communities that are first and foremost about freedom, and flourishing for those who continue to be oppressed.

One of the most powerful pieces in the collection is “CANADIAN HORROR STORY,” a poem that writes of Tina Fontaine and Coulton Boushie, and a system that routinely allows and even encourages brutal violence against Indigenous people, writing: “I would unwrite everything to make forever out of August 7, 2014.” The poem opens:

Tina Fontaine’s body was retrieved from the Red River on August 17, 2014, nine days after she was last seen at a hotel in downtown Winnipeg. The Red River is an eight-hundred-and-eighty-five kilometer body of water that meanders through major North American cities such as Fargo, Grand Forks, and Winnipeg. A toxicologist reported that the river, an unknowing accomplice, had washed away the DNA from the duvet in which Tina had been wrapped sometime on August 8. The molecular entities that bore the key to a guilty verdict likely tumbled about the Red river during the criminal investigation. In colder water, the decomposition of DNA is, however, slowed down, so it is also possible that remnants of that violence are still there, in a spectral form, blended into the ecosystem of a river already teeming with NDN history. What happened isn’t nowhere; it wasn’t disappeared. Who listened to the river? Who didn’t?

There is something quite compelling to how Belcourt utilizes theory-as-poetry and vice versa, feeling out both forms and how and where they might meet, blending the two in ways that could end up comparable to works by Erín Moure or Lisa Robertson, but engaged in a writing immersed in contemporary culture, queerness, Indigenous and Canadian histories (and where they both meet and conflict), theory, language and his roots as a member of the Driftpile Cree Nation. Given his gaze on concerns too often dismissed or left behind, the blend is captivating, and even revelatory. As he writes in “MELANCHOLY’S FORMS”:

In her seminal text Gender Trouble: Feminism and the Subversion of Identity, Judith Butler makes the case that gender identification is a melancholic process in a culture of compulsory heterosexuality. By way of skilled psychoanalytic judgements, Butler posits that one is made to disavow the “same-sexed object” as a site of desire and instead to incorporate it as a part of an affectively endowed becoming-subject. Banished to the netherworld of the unreal, “homosexual love,” to use Butler’s language, is fixed to the status of “never was.” This, Butler says in her essay, “Melancholy Gender – Refused Identification,” published twenty years after Gender Trouble, is what partly conditioned the ungrievability of those lost to the AIDS epidemic, losses accelerated by governmental neglect, the trapdoors of signification, and the neoliberal spoils of forward thinking. In the land of the lost, queerness is ephemera and ephemera is “trace, the remains, the things that are left, hanging in the air like a rumor” (José Esteban Muñoz). Queerness: at once what never was and what is still to come.