Marita Dachsel, There Are Not Enough Sad Songs

Each year, too early
the instinct to burrow
hands in the soil.
Cold cramps joints,
Freezes movement.
Persist, this benediction.
Like all things miraculous,
it is the most banal of actions:
slipping seeds beneath.
the garden is alchemy
and prayer: can sorrow
be transformed? Can this plot
of land, so small, crawling
With life, be a chrysalis?
The bursts of leaves,
the helixes of vines,
do they transform?
An answer, the answer
pushes through. 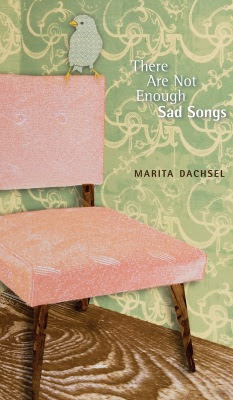 I was curious to explore the lyric monologues of Victoria, British Columbia-based poet and playwright Marita Dachsel’s third full-length poetry collection, There Are Not Enough Sad Songs (Edmonton AB: University of Alberta Press, 2019). Dachsel is the author of two prior full-length collections—All Things Said & Done (Caitlin Press, 2007) [see my review of such here] and Glossolalia (Vancouver BC: Anvil Press, 2013) [see my review of such here]—as well as a small handful of chapbooks (including one of the earliest above/ground press titles). The back cover offers that Dachsel’s work exists in “the tradition of Karen Solie and Suzanne Buffam, and with a hint of Canadian Gothic […]” but I don’t really see the linkages to Solie or Buffam. Long attentive to the perspectives of women, much of which she salvages from being completely lost, Dachsel’s work offers something else, instead; hers is a lyric that narrates with a similar lean towards precision, but more interested in examining the emotional and spiritual messes and complications and impossibilities that come with growing up and of youth, that come with being female, and that come with experiences beyond one’s control. Her poems are less studies on or around subjects than acknowledgements of events that might not otherwise be discussed. “Loss is becoming commonplace,” she writes, in the opening poem, “after the funeral,” “but this one, / this particular death, rattles.”

Her poems do feel like monologues, one that could be performed on stage as easily as they could be read on a page, or at a podium or microphone, and Dachsel’s poems also offer a kind of spiritual clarity, navigating a sequence of uncertainties with a careful confidence, considered step and hard-won experience. “When we were pregnant,” she writes, to open the poem “grown up,” “we thought we were finally / adults. Such babies, / making babies. We glowed / with hope, stupidity. / As if life was that easy.” Just as the poems of her prior collection, Glossolalia, wrote of the thirty-four polygamous wives of Joseph Smith, founder of The Church of Jesus Christ of Latter-day Saints, some of the poems in acknowledge women otherwise forgotten to history, such as Phillis Wheatley (c. 1753 – December 5, 1784), a former slave who became known as “the first African-American woman to publish a book of poetry.”

Phillis, what was your name, your real name
your mama whispered as you drifted to sleep,
what your father screamed, reverberating deep
through forest, across the ocean? Your name
you held as most sacred. We could not blame
you for not sharing who you were, to keep
some part of you whole, your own. Did strength steep
from this private word, help you navigate fame,
that blip of light, a gash in servitude?
Was this what your husband groaned late at night,
your bodies cleaved in solemn gratitude?
Did you pass your name onto your babies, bright
love for those, like you, whose lives were taken
too soon, leaving the world longing & vacant.

Posted by rob mclennan at 8:31 AM
Labels: Marita Dachsel, University of Alberta Press