His floods. His tornadoes.
Plagues. Drought.

Over nothing.
It’s never personal.

a taut hairbrush;
a smothering embrace;

A mother has only
so much patience,

so much time
to clean & care,

I forgive
His outbursts

cried out
in a cold night

needing to suckle,
desperate in faith. 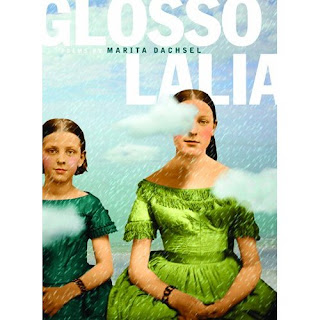 In her second trade poetry collection, Glossolalia (Vancouver BC: Anvil Press, 2013), Victoria, British Columbia poet Marita Dachsel has composed a polyvocal work of poetry as “an unflinching exploration of sisterhood, motherhood, and sexuality as told in a series of poetic monologues spoken by the thirty-four polygamous wives of Joseph Smith, founder of The Church of Jesus Christ ofLatter-day Saints.” Most poems written out of biographical/historical materials are painstakingly dull, doing little to add to what is already known, but Dachsel manages to bring a life to the material, a fine and sparkling energy, something she brought to her first collection, All Things Said & Done (Caitlin Press, 2007) [see my review of such here] as well. Akin to Robert Kroetsch’s chapbook-double The Lost Narrative of Mrs. David Thompson (Edited by Robert Kroetsch) / Ten Simple Questions for David Thompson (Recorded by Robert Kroetsch) (Windsor ON: Wrinkle Press, 2009) [see my piece on such here] and Margaret Atwood’s The Penelopiad (2005) [see my very brief review of such here], Dachsel’s Glossolalia features and focuses on a series of voices that are largely absent from what is already known, writing out fictions from the surrounding facts (or lack thereof) of the multiple wives of Joseph Smith.

I was 17, newly married
when I first put a woman to bed,
her new babe in arms.

Pride is a sin,
but I think I will be forgiven
for the surge I feel
when I consider my record. (“Patti Bartlett Sessions”)

A few years ago, a selection of her work-in-progress was published in chapbook form by Trisia Eddy as Eliza Roxcy Snow (Edmonton AB: Red Nettle Press, 2009), a poem that survives revision to appear at the very end of the collection. The poem exists a series of unmarked photographs, a series of flashes and flickers in an odd kind of collage. But one single voice in what would become an array of voices, the back of the chapbook explained:

This is a work of fiction, inspired by the real Eliza Roxcy Snow, polygamous wife of Joseph Smith, founder of the Latter Day Saints (Mormon) Church. It is by no means meant to be read as a biography of the woman. For factual information on her, I suggest reading In Sacred Loneliness: The Plural Wives of Joseph Smith by Todd Compton.

The sharpest poems in the collection are the ones composed less narrative and far more pointed in their approach, including “Patty Bartlett Sessions,” “Delcena Diadamia Johnson Sherman” and “Flora Ann Woodworth.” Exploration of voice is something a couple of other Canadian poets have been working on over the past few years as well, including Stephen Brockwell and K.I. (Karen) Press, who also present commentary and social exploration in poetry through voices that are often silent. In Dachsel’s Glossolalia, the exploration of multiple voices is echoed through the composition of individual pieces as well, as each voice utilizes a different compositional style, from the lyric of “Ruth Daggett Vose Sayers,” to the point form of “Almera Woodward Johnson” to the erasure of “Lucy Walker,” that includes:

When at length we were forced to believe she would not speak to us again we were in the depths of despair. Ten motherless children! & such a young mother! The youngest not yet two years old. The Prophet came to the rescue. He said, if you remain here Brother Walker, you will soon follow your wife. You must have a change of scene, a change of climate. You have just such a family as I could love. My house shall be their home. For the present, I would advise you to sell your effects, place the little ones with kind friends, & the four eldest shall come to my house & be received & treated as my own children, & if I find the little ones are not content, or not treated right, I will bring them home & keep them     thought     of being broken up as a family, & being separated from the little ones. However my father sought to comfort us by saying two years would soon pass by when with renewed health he hoped to return & make us a home where we might be together again. The tears rained down our faces all the while we were with them   the people often said they wished we would calm ourselves in their presence or not come to see them as it made them discontented.

Writing through sisterhood, motherhood and sexuality, the work can’t help but become a portrait (whether fictional or otherwise) of Joseph Smith himself. And what kind of portrait has Dachsel painted? The portrait appears largely obsessive, abusive and insular, a religious zealotry that can do little but damage the women around him. What is interesting is in how Dachsel’s poems focus on the individuals, working to give each of them voice, but delves little into the situation they shared, that of the plural marriage itself. Instead, the point of the collection is to hear from the women as individuals, through their own stories of childbirth, heartbreaks, jealousies and other experiences. As Dachsel writes to open the piece, “Rhoda Richards”:

My heart lives in this box.
Open it.
Posted by rob mclennan at 9:01 AM
Labels: Anvil Press, Marita Dachsel, Red Nettle Press