Despite the occultation of Olson’s reputation, a return to his ideas and writing is more urgent than ever. What are the stakes of polis in an imminent world of neo-Liberalism, the quantitative accumulation of wealth in a small coterie of corrupt malefactors, the rise of fundamentalist ideals proactively eroding the boundaries between State and Church, and the immersion of heterogeneities into the economic and fiscal homogenous condition dubbed globalization? Olson is the poet who introduced scale and ontology into poetics, radically revising natural history into the human universe, seeing the earth as our home. His Copernican revolution within poetics (“man is himself an object”) together with his commitment to a theory of communication and information that goes far beyond the centralized cerebellum of the Cartesian cogito, rendered him the exemplary poet of the Cybernetic Age. And with the earth on the brink of ecological disaster and language enmeshed in the age of informatics, Olson appears as a prophet and perhaps a destroying angel. (We should also pay credit to Olson’s pioneering work in what later emerged as Ethnopoetics. His studies of Mayan glyphs, though hardly resulting in a decoding, do inflect an interest in non-Romanic writing systems and in pre-Columbian culture that offers an eccentricating parallel to his theory of proprioception). (Steve McCaffery, “Introduction”) 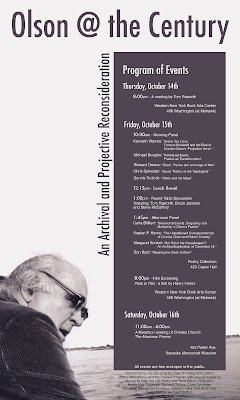 With talk of Frank Davey’s Open Letter: A Canadian Journal of Writing and Theory winding down after some forty-plus years comes an issue guest-edited by Steve McCaffery, “Olson @ the Century” (Fifteenth Series, Number 2, Spring 2013). As McCaffery writes in his introduction: “With the exception of Frank Davey’s, Stephen Fredman’s, and Miriam Nichol’s articles, the present collection of essays is based on papers initially presented as part of Olson@ the Century. An Archival and Projective Reconsideration, a symposium held at the University at Buffalo October 14-16, 2010. Conceived less as an homage to or an attempted reinstallation of Olson’s ideas and theories, the symposium was envisioned as a double-vectored reassessment along the two trajectories named in the title: archival and projective. The ‘projective’ reassessments are presented first; three archival contributions end the gathering.” The issue comes at an interesting time, when most of the current attention on that particular period of American poetry is focused on Robert Duncan, with the publication of Duncan’s The H.D. Book (eds. Michael Boughn and Victor Coleman; University of California Press, 2011), The Collected Early Poems and Plays (ed. Peter Quartermain; University of California Press, 2012) and The Collected Later Poetry and Plays (ed. Peter Quartermain; University of California Press, 2013), and the collection of essays, Reading Duncan Reading: Robert Duncan and the Poetics of Derivation (eds. Stephen Collis and Graham Lyons; University of Iowa Press, 2012), as well as Lisa Jarnot’s biography of Duncan, The Ambassador from Venus (University of California Press, 2012). Given that the conference happened three years ago, why is this collection only coming into print now?

Place, as it unrolls in The Maximus Poems, is not simply a geographical point; it is an intense, multi-dimensional nexus of vectors that include a prehistory, a geological narrative, a geography, multiple human histories and criss-crossing myths, technological mediators, and as well the individual’s own genealogy and inner landscape. Olson draws on state of the art contemporary discourses such as Einsteinian physics, Jungian psychology, Sauerian geography and Whiteheadian philosophy to put together a locus that is complexly alive. He then suggests that individuals hold themselves responsible to it. (Miriam Nichols, “The Closing of the Field: Modernism at the Wall”)

There is an interesting selection of letters from Robert Creeley to Charles Olson, four letters stretching from 1953 to 1970, selected from The Selected Letters of Robert Creeley that Kaplan Harris, Rod Smith and Peter Baker have put together for the University of California Press, to appear this fall. The letters highlight aspects of Creeley’s encouragement, shaping and working Olson’s image. One footnote reads, “The letters chronicle the fact that Creeley was instrumental in shaping the Olson canon. We see Creeley take an active hand in the publication and promotion of Olson’s writing. We also see Creeley continue to be involved with Olson legacy for the duration of his own life, from editing Olson’s Selected Poems (University of California Press, 1993) to advising friends and colleagues on approaches for teaching his work to a new generation of students.” What becomes clear about this collection of pieces on Olson and his work is in how each contributor to the collection manages to talk about Olson directly by dealing with him indirectly, nearly through the works and words of others. Miriam Nichol’s essay, “The Closing of the Field: Modernism at the Wall traces a compelling thread from Charles Olson’s views of history and identity through Ezra Pound to Erin Mouré’s work on the idea of the citizen. As Nichols writes:

Elsewhere, in the poetry collection O Cidadán, and in her essays, My Beloved Wager, Mouré links her on-going meditation on such transformative properties to a study of citizenship. For Mouré, the inequity and suffering caused by globalization do not call for a return to nationalism in the traditional sense because nationalism implies entitlements and exclusions dependent on a concept of origin. She writes that “historical and national entitlement (a notion warped and split by colonialisms) always seems to mean some people have to die or be denied full citizenship in the policy, denied use of their language, because of their origins. Faced with this, what use are ‘origins’?” (159). Instead, Mouré speaks of “assemblages of the person” or “coalects” (MBW 156, original emphasis); borders that are porous and leaky, bodies that are permeable, identities that are fluid, wonderstruck and eager for transport. The self, she says, has its “two avenues (that of autonomy, standing before the self, and that of the other, standing before those who precede one)” and those “play through and against each other […].”

A particularly interesting essay is Davey’s end-piece, “Olson in Canada,” writing about Olson’s influence on Canadian writers and writing, particularly his lack of influence on writers in eastern Canada, such as Raymond Souster and Louis Dudek. The influence Olson had on writers in the west, particularly Vancouver, is well-known and Davey names names, including Ottawa poet William Hawkins, who drove west with Roy MacSkimming to participate in the 1963 Vancouver Poetry Conference. Considering that Souster brought Olson up to Toronto as part of his infamous Contact Reading Series, the lack of change in Toronto poetry reads as particularly willful by some. As Davey writes, “Overall, this period of Olson’s contact with Canadian writers appears to do little more than make them aware of his poetics and of the formal possibilities they offered. Only Dudek shows any significant understanding of them, and is unimpressed. Souster is impressed but seemingly unable to understand well enough to make sustained use of them.” The interaction made little difference on Souster’s writing, but impacted his editorial significantly, as Davey notes a number of future Contact authors who picked up elements of Olson’s writing, including George Bowering and Davey himself. Still, one of the most striking parts of Davey’s essay is the clarification of how exactly Olson’s work influenced Canadian writing: “One of the oddities of Canadian attention to Olson is that even though most of it occurs during the 1960s, it is the Olson of the 1950s – of ‘Projective Verse,’ written in the late 1940s and first published in 1950, and of the first three books of ‘The Maximus Poems,’ that are most influential. Only those who followed him to Buffalo – Wah and Hogg – seem to have found much to learn from in the later books.” About Souster, Davey writes:

Souster’s lack of change, however, may not have been as conscious or deliberate as Whiteman hints. There are several places in his letters to Olson where he appears to regret not understanding Olson’s poems and theories as fully as he would like, or where he apologizes for the limitations of his own poems – in one instance sending Olson a new poem and commenting “not much, I’m afraid, but I suppose typical stuff right now, not really making it” (78). Acknowledging one’s own limitations does not necessarily mean that one has choen to have them. Moreover, Olson seems to have received positively what poems Souster did show him. When Donald Allen proposed to include Irving Layton and Gael Turnbull in his The New American Poetry 1945-1960 anthology in order to show that the new poetry had international reach, Olson quickly replied “lawd if you are going to include Canadians, above all pick Souster for yr center, there – especially for such an anthology, for he and not that Englishy slicky Layton or that nice Migrant Gael: lawd Souster is the one who has for years caught on that the American thing exists for use: ex/ his Contact-Combustion, as against anything Montreal etc” (Maud 60).