Aren’t you sorry you missed our third annual VERSeFest poetry festival? I really don’t know how to convince you any more than I already have. But don’t feel bad: there’s a reading coming up tomorrow through The Factory Reading Series with Deborah Poe, Wanda O’Connor and Lauren Turner. You should come to that. 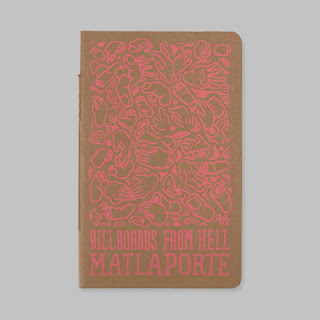 Toronto ON: Toronto poet Mat Laporte has been producing increasingly interesting work over the past year or two, the result of which is the chapbook Billboards from Hell (Toronto ON: Ferno House, 2012), currently enjoying a second printing. Billboards from Hell is Laporte’s second chapbook, after Demons (Ferno House, 2010). What intrigues, in part, is the range of structures Laporte attempts throughout the short collection of poems, really stretching out the possibilities of the work. Not all the poems achieve what they attempt, but when they do, they strike perfectly, such as this poem, with a title borrowed from W.G. Sebald:

The Rings of Saturn

from the chest? Breaking loose from sheer inertia
and the capital of youth is angst. It is Canada Day.

The mall is closed. Is everybody with me? A bridge
through the physical world is taken with frequent stops

for snacks. It has been a beautiful dream. Though
the body is open to contemplation, it is, in a sense

excluded. Nothing beats a cohesive statement
As in a theatre, the actors appear

to complete the great catastrophe of this piece.
You are an uprising in yourself.

jwcurry once told me that bpNichol wasn’t a great poet because everything he did worked, but that he was willing to fail, and there is something to be admired by any writer constantly willing to stretch out their own skills. Laporte is willing to stretch out and attempt, and there is a great satisfaction to seeing just how clearly and openly his poems attempt, from list poems to short lyrics to the pared-down sequence of the title poem. Not everything might work, but sometimes one can achieve magnificent things that couldn’t have been possible otherwise, an aesthetic openness Laporte shares with Ottawa poets Amanda Earl and Pearl Pirie. I am enjoying these poems, and am very interested to see where Mat Laporte’s writing continues to go.

The day is a dog without skin
There is a constant kick in the ceiling
Red stool, black book, grey cup, red stone
Potlights or portholes into oblivion
I could stare at this monkey for millions
Watching him dance is like
The most beautiful expression of
I will never love you, signed, the Truth
As if naked hysterical guacamole
I’m sweating hot dogs on the floor
DJ Unidentified Flying Organ vs. DJ Ball-Shaped Head
The State is an illegible tank
Each day plows instead of no-head
Nowhere. Buckets of mitochondria,
Prehistoric man, and the whole shipful of meaning
Pulling in to Main St. Station
We shouldn’t even sleep
We should all just scream all the time

Windsor ON: Produced for a reading Dennis Cooley did in Windsor in March, 2012 is every tuesday (Wrinkle Press, 2012), produced by Nicole Markotić’s Wrinkle Press (see their relatively new website here). The stretch of the three pages make it difficult to tell for certain if the chapbook is made up of a single poem composed out of small fragments, or three distinct pages, part of an ongoing tweak of Cooley’s to not title certain of his pieces. The poem begins with the title, writing: “every tuesday / also thursday every thursday too / and sometimes wed / nesdays hang // my heart in the window / my shadow on the snow[.]” Cooley’s poem (or poems) jam, enjamb and twist, rife with puns and slips that make one groan as much as breathless, turning lines on coins far smaller than a dime. As in much of Cooley’s writing, every piece ties into structures far larger than they could ever appear, stretching far wider and deeper than even the consideration of the trade volume, which makes me wonder what this fragment might eventually be part of.

the darn place
all over our as
tonished faces