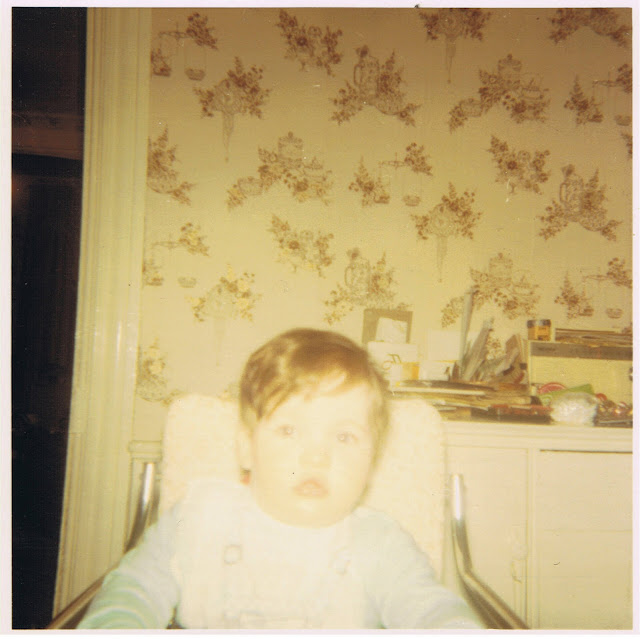 [photo of me; on back, "new great grandchild, ten and a half months," which suggest my grandmother Page sent this snapshot to her parents] Thanks to the combination of shifting provincial rules on access to adoption information, and an increase in my own errant attentions, I recently started applying for various slices of information regarding my adoption. On Friday, March 1, the mailman made my head explode by delivering my “Statement of Birth,” which gave me my birth mother’s full name, which allows me to fill in the missing end of my birth name, both of which I’m keeping to myself.

With two weeks to go before my forty-third birthday; she is always on my mind this time of year. A still-open question.

Attempting to discern fact from fragments is akin to archaeology, each small speck from a variety of sources and reliabilities. I’ve long known my birth name, “Duncan Warren Andrew A.,” last name an initial only. My parents informed me that I’d gone through foster care until my single mother could no longer juggle work, school and me. Newly renamed, I arrived to the farm at ten months, to the only parents I have known.

Twenty years ago, non-identifying information provided more than what my parents had been told: that my mother was twenty when I was born, that my father wasn’t listed on my birth certificate, and that my mother came from the “Cornwall area,” all of which have been confirmed by this document. My father, twenty-four when I arrived, might not even know I exist.

Given his absence, I long presumed that I shared a last name with her. This abstract is now concrete, and it overtook whatever other plans I had for the day, instead scouring the internet for direction, hints or outright discovery, which has so far come up empty. I scoured the history of her corner of Ontario, extremely close to where I grew up. I searched marriage and birth records, newspaper records and Ancestry.ca. I looked up what might have been her high school.

I become detective, seeking out what is not yet known.

I now know her mailing address at the time of my birth. I know too, that I was 8 pounds, 10 ounces, after forty weeks of pregnancy.

When I announced this on Facebook, I found the results a bit strange; the occasional person reminded me to know the difference between family and biology, another reminded me that mothers love their children, and some hoped that this might be “healing” for me, all of which I found rather forward and a bit presumptive.

I know who I am; I’ve long been certain of my own identity. This new information makes me no less or more who I have always been.

I do not require this process for the sake of healing; how, exactly, do some think I’m broken?

How does being adopted suggest a lack of mother’s love?

I do not feel abandoned, nor have I ever. Given her attempts as a single woman in 1970 to work, school and parent, I applaud her attempts to keep me, and suspect the difficulty she must have had in giving me up. I was nearly a year old when she let me go..

I have never felt broken, and the unknown less a hole than a sizable gap.

I think to not be adopted is to not really understand: in seeking out, I do not abandon one set of parents for another. The curiosity I have about my origins isn’t a rejection of nor a commentary upon those who raised me, those I will always know as parents. Concurrently, I do not assign any kind of blame upon my birth parents. I have no anger. To suggest either is a confusion of issues, and a misunderstanding of the emotions involved.

I know so very little of her circumstances, I can only speculate upon what I do know, which give the impression of a strong attempt, with circumstances beyond her control. Might Mother’s Allowance in 1970 have made all the difference? There are essential strands missing from this story.

There is a small scene I wrote into my first novel, white (The Mercury Press, 2007), that tried to articulate a similar absence:

P has a hard time remembering what her father looked like. He died when she was six, and she can remember things he said, and events that involved the two of them, but his face remains a mystery.
When P was seventeen, she compared a photograph of her mother to her own face in the bathroom mirror, searching out the differences. Those, she decided, would be the parts that belonged to her father. She struggled to form an image.

[a second photo from the same set] There are parts of me that are missing. Important parts. Parts I need to understand.

The tangibility of this new knowledge startles me. The implications of a name, this other person I had been for nearly the first year of my life. This other history, and all it implies.

Might I have turned out differently had my birth name remained? Had I been able to stay with her? It’s hard to not imagine this as an entirely separate identity: he who was he and not yet me.

I exist with the presumption that she still lives, existing just beyond my reach, yet so much closer, now. She would now be sixty-three years old. Part of the reason I keep her name to myself is the knowledge that it isn’t mine to broadcast. I have no desire to disrupt.

She might easily have married, birthed a family, few or none of whom might even know I exist. It might even be a sensitive subject in her household, spoken in whispers, if at all.

I keep this to myself because it is mine. I am still considering what to do next. For now, I seek, and search out. I have already had two birthdays without a mother. I do not wish for more.

When I find her, will I call her by her first name? Will I be able to call her mother?

This is a beautiful and amazing article, insightful, honest and I am in total agreement with your not needing to be "healed" nor that your birth mother rejected you. The interesting thing is that I, at 64, am probably close to the age she would be now. I had my first child in 1972. I had two others as a single parent without their fathers as part of my life in any way and I can testify that it was extremely difficult on many levels. But one thing I did have going for me is that my own parents were extremely supportive and I was able to go home and receive financial and emotional support from family and community, enabling me to raise 3 children from 3 different fathers alone.

You sound like a soulful, balanced individual and I am touched by your story.

cool circumstances, rob. Those genetic predispositions are sure strong, no mistake. Just look at the long silver hair on that baby!