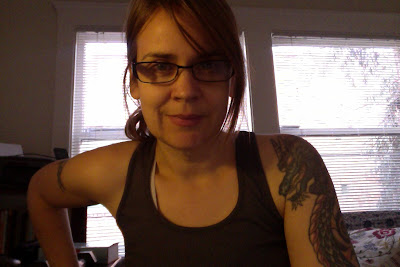 kathryn l. pringle lives in Oakland, Ca. She is the author of fault tree (winner of Omindawn’s 1st/2nd book prize selected by CD Wright), RIGHT NEW BIOLOGY (Heretical Texts/Factory School), The Stills (Duration Press), and Temper and Felicity are lovers.(TAXT). Poems can be found in Denver Quarterly, Epiphany, Fence, Phoebe, horse less review, and other journals. Her work can also be found in Conversations at the Wartime Cafe: A Decade of War (WODV Press), I’ll Drown My Book: Conceptual Writing by Women (Les Figues), and forthcoming in The Sonnets: Rewriting Shakespeare (Nightboat Books).

1 - How did your first book change your life? How does your most recent work compare to your previous? How does it feel different?
it calmed me down... for a couple of reasons.

1. after getting my mfa i felt this enormous pressure to get a book out... if only to justify having spent so much time and money going to grad school to be a poet.

2. i wasn't sure there was room for my work in the publishing world. RIGHT NEW BIOLOGY ended up becoming my first book, but it wasn't my first manuscript. and i had achieved some success getting pieces of RNB published in journals... but i wasn't sure it would ever get published as a book because i thought it might be too weird. what do i know? anyway, RNB is stylistically very different from fault tree--fault tree is more narrative... but the concerns are the same: how people create and occupy space, how space can dictate action and how actions can dictate space.

2 - How did you come to poetry first, as opposed to, say, fiction or non-fiction?
i think my attraction to words as units made me a poet first. i've slowly learned the value of content-driven work and am writing a novel now. i was fascinated with the dictionary growing up so i think it would be safe to blame Merriam-Webster for my poetic aspirations.

3 - How long does it take to start any particular writing project? Does your writing initially come quickly, or is it a slow process? Do first drafts appear looking close to their final shape, or does your work come out of copious notes?
it takes me about 2 years to finish a manuscript... i first come up with a sort of grand theory for the book (ie what if sound had mass?) and then i do a lot of research [that i call writing] around my theory... so by the time i begin a ms i have a pretty good idea of its shape and aim. i draw a map of the ms before i start writing, too. [the map for RNB is in the I’ll Drown My Book, Conceptual Writing by Women anthology and the map for fault tree is overlaid on its cover] maps allow me to move in and out of the ms a little more easily. the actual writing doesn't take very much time... i think i wrote fault tree in about 5 days... but i did many months of research and reading around before i sat down to write.

4 - Where does a poem usually begin for you? Are you an author of short pieces that end up combining into a larger project, or are you working on a "book" from the very beginning?
i'm always working on a book. the environment of the work is pretty critical to my work so i think in terms of book, always. i wouldn't know how to begin to put discrete poems in the same book. i admire those that can.

5 - Are public readings part of or counter to your creative process? Are you the sort of writer who enjoys doing readings?
public readings are totally fun and i love reading. readings help me figure out how the work is hitting an audience--or not hitting an audience. also the sound of the work is really important to me... and the rhythm... readings give me a chance to build a different kind of environment for the work.

6 - Do you have any theoretical concerns behind your writing? What kinds of questions are you trying to answer with your work? What do you even think the current questions are?
my writing is mainly concerned with identity [individual and/vs cultural and political] and how we form/are formed by our environments.

7 – What do you see the current role of the writer being in larger culture? Does s/he even have one? What do you think the role of the writer should be?
i think writers have roles in society but i would hate to define them or make any statements about what a writer should or should not be or be doing in the larger culture. i have my preferences, of course... i know what my own role should be/is... and that's good enough for me.

8 - Do you find the process of working with an outside editor difficult or essential (or both)?
not at all difficult! but i've never had an intrusive editor... if someone told me to rewrite or cut a couple of things, i'd consider it... but if they had many ideas like this i wouldn't be very happy, no. at that point the editor becomes the writer and then i just figure: put yr own name as the author.

if this novel i’m writing ever makes it into a published state… i might have a different answer for you. BUT… WITH POETRY…i think editors should tread lightly.

9 - What is the best piece of advice you've heard (not necessarily given to you directly)?
just write.

10 - How easy has it been for you to move between genres (poetry to critical prose)? What do you see as the appeal?
they are such different animals for me. different animals with the same philosophical intention. with poetry, my writing depends a lot on the reader's participation. with prose, my writing leaves the content assessment to the reader but is more controlling. both modes are very satisfying to my writer self.

11 - What kind of writing routine do you tend to keep, or do you even have one? How does a typical day (for you) begin?
i can't afford to have a typical routine that translates into daily or even weekly writing, but often i begin with research on whatever theme i want to explore [both of my current manuscripts involve a lot of civil engineering and placemaking ideas] and read, read, read. then think. then try to make a writing weekend or mini-vacation for myself and write the book.

12 - When your writing gets stalled, where do you turn or return for (for lack of a better word) inspiration?
science and philosophy.

13 - What fragrance reminds you of home?
grass right after it has been mown. [and then my allergies go insane and there goes the whole fond memory thing...]

14 - David W. McFadden once said that books come from books, but are there any other forms that influence your work, whether nature, music, science or visual art?
film, for sure. science fiction films. the film Dark City was/is hugely important to almost all of what i write. and of course, science  and architecture as mentioned above.

15 - What other writers or writings are important for your work, or simply your life outside of your work?
Edward S. Casey's philosophical texts, arakawa & gins, hannah weiner, stacy doris, erika staiti, judith goldman, tyrone williams, clark coolidge, david foster wallace,  too many to name, really… but almost every person i meet influences some aspect of my writing, somehow.

16 - What would you like to do that you haven't yet done?
travel North America by rail.  one day i WILL do this. and literally WRITE the region.

17 - If you could pick any other occupation to attempt, what would it be? Or, alternately, what do you think you would have ended up doing had you not been a writer?
i'm currently in school taking prereqs to get into physical therapy school... so... doctor of physical therapy!

18 - What made you write, as opposed to doing something else?
for most writers i know, they are always writing AND doing something else... so... what i want to know is: what do nonwriters do with their time? i don't understand. how do they fill in the space that writing occupies?

19 - What was the last great book you read? What was the last great film?
i'm reading Infinite Jest again and loving it again. poetry: patty mccarthy's marybones; judith goldman's l.b; or, catenaries; laura walker's follow-haswed; tyrone williams's howell; andrea rexilius's half of what they carried flew away; elizabeth robinson's counterpart; erika staiti's unpublished but completely brilliant texts; and a few others. as for film... christian marclay's the clock! i couldn't/wouldn't sit through hours of it... but loved what i did sit through. was very pleased to be in L.A. when it was at LACMA.

20 - What are you currently working on?
i'm writing a novel and a new poetry manuscript. both are concerned with placemaking and dislocation and biopscyhosocio concerns that arise from dis/location. both are centered around this working theory i have re: cities as physiological structures... organisms themselves. the novel is incredibly fun and frustrating to work on... and the poem/book [called civil engineering]  is not getting enough of my attention lately... but my research lends itself to both manuscripts, so hopefully writing will happen more often in the near future.