View the Premiere Screening of Robert McTavish's "The Line Has Shattered" on March 21 at SFU Woodward's, Vancouver 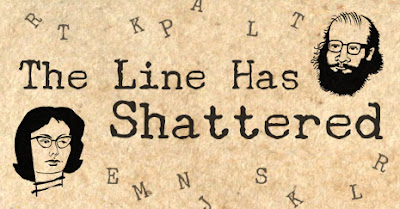 The Line Has Shattered, a documentary film by Robert McTavish on the 1963 Vancouver Poetry Conference, is being premiered on Thursday, March 21st at 7:30pm at the Djavad Mowafaghian World Art Centre, Goldcorp Centre for the Arts, SFU Woodward's, 149 W. Hastings Street, Vancouver. Admission is by donation: $3.00 for students, and $5.00 for others.

The event is being introduced by Canadian Poet Laureate (and '63 conference participant) Fred Wah.

Narrated by poet Phyllis Webb, who chronicled the event at the time, The Line Has Shattered is a sixty-minute documentary film that revisits the '63 Conference and hears from a number of its participants half a century later.

The Vancouver Poetry Conference, hosted by the University of British Columbia in the summer of 1963, is seen by many as a landmark event in the history and development of West Coast Canadian and North American innovative poetry - and indeed a major early manifestation of the Sixties West Coast zeitgeist.

Organized by UBC English professor Warren Tallman and American poet Robert Creeley, the conference was an intense, freewheeling three-week program of discussions, workshops, lectures, and readings at which a rising generation of Canadian and American poets, including George Bowering, Daphne Marlatt, Fred Wah, Jamie Reid, Michael Palmer, and Clark Coolidge, was exposed to and, in many cases, profoundly influenced by the personalities and 'New American' open-form poetics of the visiting poet-instructors Allen Ginsberg, Charles Olson, Denise Levertov, Creeley, Robert Duncan, and Margaret Avison.  For many of the student participants the conference played a key role in providing them faith that the pursuit and practice of poetry could constitute a meaningful calling and life's work.

Robert McTavish is a Canadian documentary film-maker whose works include Ghosts on the Land (2001), Fiddler's Map (2003) and What To Make of It All?: The Life and Poetry of John Newlove (2006).  He also edited A Long Continual Argument: The Selected Poems of John Newlove (Chaudiere Books, 2007, afterword by Jeff Derksen) which was hailed by the Globe and Mail as "a fitting monument to the poet's consummate craftsmanship, and a cause for national celebration."

This event is being co-sponsored by SFU Library and English Department, with thanks to the Vancity Office of Community Engagement.