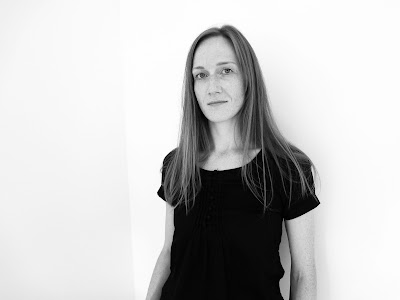 Originally from Vancouver, Gillian Savigny has spent the last twelve years studying and working in cities across Canada. She holds a B.A. Honours degree in English Literature from Queen’s University and an M.A. degree in English Literature and Creative Writing from Concordia University. She has served as Editor for ultraviolet Magazine, Managing Editor for Delirium Press, and Contributing Editor for Matrix. From 2007 to 2008 she worked as a speechwriter for the Leader of her Majesty’s Loyal Opposition in Ottawa. Her first collection of poetry, entitled Notebook M, was published by Insomniac Press in 2012. She lives in Toronto where she works in the non-profit sector.

1 - How did your first book change your life? How does your most recent work compare to your previous? How does it feel different?
Before my first book, I felt like I couldn’t think of writing poetry as anything more than a personal hobby—something I did alone in my spare time. Now I feel more a part of a community of other writers and more willing to set aside other pursuits in order to focus on writing.

2 - How did you come to poetry first, as opposed to, say, fiction or non-fiction?
I have a short attention span and writing fiction, even short fiction, seems like a pursuit that requires both the ability to multi-task and the ability to sustain concentration over a long period of time. For someone who is easily distracted that seems like trying to juggle while balancing something on your head. Plus the elements of writing that I most enjoy are the language, imagery, turns of phrase—less so character and plot.

3 - How long does it take to start any particular writing project? Does your writing initially come quickly, or is it a slow process? Do first drafts appear looking close to their final shape, or does your work come out of copious notes?
It varies from poem to poem, but I have found that once everyone’s finally out on the page I’m often a lot happier with the poems that came quickly than I am with the ones that took their time. I guess because they can still surprise me, whereas I know all the painful secrets of the slow ones.

4 - Where does a poem usually begin for you? Are you an author of short pieces that end up combining into a larger project, or are you working on a "book" from the very beginning?
Writing usually begins with an idea that for whatever reason catches my attention and makes me want to tease it out in different ways. It’s usually something that I can’t resolve after a single poem, that I want to go back to and explore but using a different approach or form or conceit and so I guess in that sense I’m writing a book from the beginning, but the book shifts as the poems take shape. When I was starting the project that would eventually become Notebook M I wanted to write generally about the scientific sensibility. It took awhile for the Darwin poems to emerge and for his writing to become a kind of frame for the whole book. In the book, those early poems appear toward the end, making it seem as though the Darwin voice is fading, being replaced by a more modern and general scientific sensibility when in fact the opposite happened as I was writing.

5 - Are public readings part of or counter to your creative process? Are you the sort of writer who enjoys doing readings?
So far readings haven’t been a big part of my creative process. When I was writing Notebook M, I spent a lot of time thinking about the page as an environment and about how poems have adapted to the page. Notebooks, like journals, are books that aren’t really meant for public consumption so I wanted to explore what elements could be built into a poem that would keep it on the page and make it difficult to adapt into a performance. That said, I do enjoy readings. I find them nerve wracking, but it’s always exciting to share your work with an audience and see how they react to it.

6 - Do you have any theoretical concerns behind your writing? What kinds of questions are you trying to answer with your work? What do you even think the current questions are?
Aside from thinking about poems as adapting to different environments and the content of poems adapting to different poetic forms, when I was writing Notebook M, I spent a lot of time thinking about whether writing poetry is a process of making or collecting. The word ‘poetry’ comes from the Greek word that means “to make” and I think many poets think of themselves as “makers” that is creators, people who bring things into existence out of the thin air of individual experience. But that idea makes me kind of uncomfortable. It feels bound up with monotheistic worldviews where the poet is cast as a God-like figure. In a book about science and Darwin I wanted to question that conception of the poet and try to figure out what could replace it and this idea of the poet as collector—of writing as a process of bringing together found objects either to show contrast or affinity—seemed like it might be a workable alternative.

7 – What do you see the current role of the writer being in larger culture? Does s/he even have one? What do you think the role of the writer should be?
I don’t know what the role of the writer should be, particularly the role of poets. The average person probably thinks of the poet the way they might think of a broach—as being a totally superfluous adornment. I don’t know if I could put together a case that would convince them otherwise, but I find it oddly comforting to think of the William Carlos Williams line: “It is difficult to get the news from poems yet men die miserably every day for lack of what is found there.”

8 - Do you find the process of working with an outside editor difficult or essential (or both)?
Essential. I think everyone can benefit from a good editor who understands what you are trying to accomplish and can help you achieve it in a way that will clarify your intentions for your audience. Working with Sachiko Murakami on Notebook M was a wonderful experience. She helped me give all my darlings a good death and made a much better book in the process.

9 - What is the best piece of advice you've heard (not necessarily given to you directly)?
This isn’t the best piece of advice I’ve ever received, but it is my favourite: write with a pen that makes you feel good. It sounds totally trivial, but it reminds me that writing should be enjoyable. And while many parts of the writing process are out of your control, the pen you choose to use definitely isn’t.

10 - How easy has it been for you to move between genres (poetry to fiction to critical prose)? What do you see as the appeal?
I haven’t really done much moving yet, but I hope to do some experimenting in the near future. I’m interested in how form influences thought expression so in that sense it is appealing to think about exploring narrative forms.

11 - What kind of writing routine do you tend to keep, or do you even have one? How does a typical day (for you) begin?
My writing routine has typically been as follows: do a lot of thinking about writing, research things I’m interested in, wait until I can arrange some kind of deadline that is out of my control, then let the deadline pressure crystallize my thinking on the page. I would love to be the kind of writer who has a daily routine. I have tried many times to get myself into this kind of routine, but I think I’m doomed to be daydreamy, erratic and last minute.

12 - When your writing gets stalled, where do you turn or return for (for lack of a better word) inspiration?
Walking helps. I find moving sometimes makes it easier to think. It also helps to open a book I’ve never read before. I don’t find going back to books I’ve already read helpful. I need to move forward, find something new. So perhaps the best thing would be to walk to a bookstore to buy a new book. I’ll have to try that the next time I hit a wall.

13 - What fragrance reminds you of home?
I don’t have very distinct smell associations with home—though for some reason I do with my late grandma’s house in Medicine Hat: pink lemonade, garden fresh stewed tomatoes, Hawaiian tropics sunscreen—but I do have strong sound associations. I grew up on the west coast where it felt like it would rain non-stop from the beginning of November to the end of February. I live in Toronto now, but I find I sleep better when it rains through the night. For the same reason, I have an unusually high tolerance for the squawking of seagulls and crows.

14 - David W. McFadden once said that books come from books, but are there any other forms that influence your work, whether nature, music, science or visual art?
Science is a big one.

15 - What other writers or writings are important for your work, or simply your life outside of your work?
The writers who have most influenced my work are the writers I worked with in workshops. Carolyn Smart, Moez Surani, Alex Porco, Mary di Michele, Stephanie Bolster, Sachiko Murakami, Kate Hall, Jani Krulc, Susan Gillis, David McGimpsey, Jon Paul Fiorentino, Steven Heighton, and Josip Novakovich.

16 - What would you like to do that you haven't yet done?
Change a tire. Build a cabin. Visit the Galapagos.

17 - If you could pick any other occupation to attempt, what would it be? Or, alternately, what do you think you would have ended up doing had you not been a writer?
Evolutionary biologist. Psychiatrist.

18 - What made you write, as opposed to doing something else?
Writing is challenging, but the effort feels worthwhile. Also, I always found other writers to be such interesting, thoughtful, funny people and continuing to write seemed like a good way to stay in their company.

19 - What was the last great book you read? What was the last great film?
I just finished reading Last Evenings on Earth by Roberto Bolaño. I admire the subtlety of his storytelling and how gracefully he resists tidy resolution. For the film, I’ll choose Take Shelter by Jeff Nichols. It tells the story of a father and husband experiencing the symptoms of schizophrenia for the first time and the impact that has on his family. I admired how the director intertwined realism and delusion.

20 - What are you currently working on?
I’m in the very early stages of a new poetry project. It’s one that will allow me to keep thinking about collecting—in this case hoarding or the pathology of collecting and what that means when the thing collected is alive and wild.