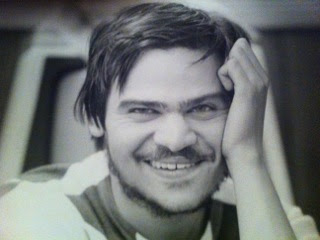 Ashok Mathur is a writer and educator who works collaboratively with artists and academics and activists. He directs the Centre for innovation in Culture and the Arts in Canada at Thompson Rivers University in Kamloops where he holds a Canada Research Chair in Cultural and Artistic Inquiry.

1 - How did your first book change your life? How does your most recent work compare to your previous? How does it feel different?
I suppose it made the writing tangible in a way that it wasn't before. It made for a potential trajectory (I could think of a 'next book' instead of a 'next piece of writing' or 'next submission to a little magazine'. Re comparisons, hard to do really. The first book was dense, rhythmic poetic prose -- most recent and more recent ones have been storied lines with complex characters. Recent projects feel more of a larger gambit than earlier ones.

2 - How did you come to poetry first, as opposed to, say, fiction or non-fiction?
That was the climate of the day, my peers, the way we were reading and telling stories. It felt right and contemporary, plus it lent itself to public sharing in a different way. That's still the case but like with many other artists, it's important and necessary to experiment with different forms.

3 - How long does it take to start any particular writing project? Does your writing initially come quickly, or is it a slow process? Do first drafts appear looking close to their final shape, or does your work come out of copious notes?
Usually the writing is swift, or at least comes in bursts. I remember one large novel-like project came out in a ten-day writing spree, and it looked pretty much the same upon publication. But others have gestated for years, started, put on a shelf, returned to. Those projects morph into things that look quite different from the original

4 - Where does a poem usually begin for you? Are you an author of short pieces that end up combining into a larger project, or are you working on a "book" from the very beginning?
Poems often come from rules. I like to 'make up' rules, such as writing a poem per day with a certain line length, or writing using a particular device (one project was written while in residency at a university in the UK and composed using only the characters and technology of an old palm pilot). Usually the projects are distinct though and i don't patch in older into newer ones or anything quite like that.

5 - Are public readings part of or counter to your creative process? Are you the sort of writer who enjoys doing readings?
Yes and no to both parts. I like the idea of communal sharing. And i often enjoy readings. I think they can be problemed spaces too, when authors read without a clarity of purpose "(I'll just share my work now," with no sense of audience). What i like is the participation of an audience, their engagement in the words that they hear come off the page. But often enough, the poetry or prose doesn't lift so easily into an aural atmosphere.

6 - Do you have any theoretical concerns behind your writing? What kinds of questions are you trying to answer with your work? What do you even think the current questions are?
First and fore, social engagement, a way of entering into a sphere of discussion with a creative lens.

7 – What do you see the current role of the writer being in larger culture? Does s/he even have one? What do you think the role of the writer should be?
Wow, this is hard. I'd say the writers  I'm most interested in, the writers who I think matter to me, are the ones who take on the world in their writing. They don't do it to entertain or educate (though they do both) but they do it to engage fully and completely. It's a way of seeing the world anew, or if not new per se, then with a different clarity.

8 - Do you find the process of working with an outside editor difficult or essential (or both)?
Depends on the project. For many larger and more complex ones, essential, but sometimes it's fun to go it alone, or with a companion, so the work comes out and exists in the world without major mediations.

9 - What is the best piece of advice you've heard (not necessarily given to you directly)?
Jean-Luc Picard, sitting on the bridge of the Enterprise, tugging down his polyester federation jersey, gesturing with a combination of precision and abandon at the front screen which looks out onto the stars of the universe and instructing his crew: engage.

10 - How easy has it been for you to move between genres (poetry to fiction to critical prose)? What do you see as the appeal?
Not too difficulty. It comes to what process is called for. I like both poetry and prose and all the spaces in between. I figure you have to move with the genre, not try to force yourself into one or the other just to make a play for readership.

11 - What kind of writing routine do you tend to keep, or do you even have one? How does a typical day (for you) begin?
Chaotic and rambunctious. Definitely not ordered or routined. Binge writing more than practiced discipline.

12 - When your writing gets stalled, where do you turn or return for (for lack of a better word) inspiration?
Usually community and art in various forms. What are others doing to get themselves focussed, what grabs their attention, where do i want to go?

13 - What fragrance reminds you of home?
Napthalene

14 - David W. McFadden once said that books come from books, but are there any other forms that influence your work, whether nature, music, science or visual art?
Community. Or to misparaphrase Sartre, 'writing is other people'. No specific allusion to forms like nature or art, but from those who are thinking, acting, and producing...

15 - What other writers or writings are important for your work, or simply your life outside of your work?
A lot of writers who theorize the body and all its manifestations, work around technology and pedagogy, and those who otherwise explore the human condition.

16 - What would you like to do that you haven't yet done?
Fly. Or be invisible. Or time travel, that's a good one.

17 - If you could pick any other occupation to attempt, what would it be? Or, alternately, what do you think you would have ended up doing had you not been a writer?
Nefarious options -- i never really think of myself as a 'writer' but as someone who engages in the form of writing/communication as one of many creative disciplines. But that said, if i couldn't do what i do now, i suppose I'd like to work with animals. You know, communicate. Learn what the dolphins really think of us, how the chimps make fun of humans, that sort of thing.

18 - What made you write, as opposed to doing something else?
Pure circumstance. What was avail at the time. My communities building up around me.

20 - What are you currently working on?
Writing creatively about creative acts -- artists investigating residential schools, and I'm taking a lens to their work that is less analytical than poetic. so that's the next project.

12 or 20 (second series) questions;
Posted by rob mclennan at 9:01 AM
Labels: 12 or 20 questions, Arsenal Pulp Press, Ashok Mathur, Centre for innovation in Culture and the Arts in Canada