NB [Nicole Brossard]: In How Writing is Written, Stein says that each generation has to take care of daily life and anyone being creative is not in advance of his or her time. We are always contemporaneous for we cannot live in the past because it is gone and cannot live in the future because we have no idea of it; therefore, in the act of living each one has to live as a contemporary. I agree. By taking care of the present, we formally take care of layers of narrative and we existentially absorb its poetic incentive. Stein invested a lot in repetition to craft the sentence, a means that allowed her to destabilize the meaning while constructing its logic at the same time. 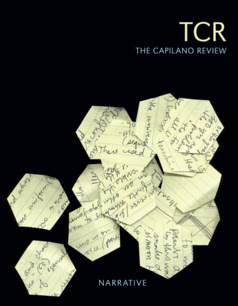 The new issue of The Capilano Review, titled “Narrative,” opens wisely with a magnificent interview conducted by Susan Holbrook, “‘Delirious Coherence’: an Interview with Nicole Brossard.” For such an issue, I’m glad to see contributions from writers doing incredible things with prose narrative from a variety of angles, little of which has really garnered enough attention—Aaron Peck, Meredith Quartermain, Reg Johanson, Jen Currin, Michael Turner, derek beaulieu and Nicole Markotić—as well as writers who have been working the genre for years, such as Gail Scott, Vanessa Place and Nicole Brossard. Still, there are some other prose writers I wouldn’t have minded hearing from as well, including Margaret Christakos, Ken Sparling and Arjun Basu, each who have been shifting the terms of what prose might allow. Even the short pieces that I saw recently by Douglas Glover in Fence magazine [see my note on such here] might have been worth discussing. Still, there is much to be gleaned from the interview with Brossard, one of the smartest interviews I’ve seen in a while, as Brossard continues along her narrative thread:

Recently I have been more curious about fragments of prose and of narrative, how they infiltrate the poem to change its rhythm and renew its seduction, for example, by expanding time with predictable expressions or contracting it with surprising ones or weird punctuation. Here I think of how prose has invited itself in White Piano (2013), especially in the poem “Paragraphs of Eternity,” which concludes with a prose page referring to O.R., the main character of my first novel, A Book (1976), and with this sentence: “The grammar of the everyday won’t let go. From now on, the poem absorbs the dust of prose….” This text is also followed by the poem “Without Story” in which I finally admit that yes we do need stories to go on with meaning.

I’m fascinated by the way Brossard discusses how her prose work intermingles with her poetry, one genre impossible to keep separate from the other. The issue also has a selection of poems by Brossard, translated from French by Robert Majzels and Erin Moure into English, the same two who translated the poetry collection she references above, White Piano, newly out from Coach House Books.

In dep fall we turn into ghosts or extend olive branches. Seasons clot us cluster us, husky with hair. Last summer’s nightfigher bounces emails off our cloud armour, our shrug tectonic, streets shapeshifting under rain’s snakework. Buildings rub their clayslipped chests together until winter. Until it lifts, vanish us. We surrender our genie coefficients to calendar art. Someone is painting murals on waterfalls again, someone is building a parking lot on a graveyard, someone is lacing branches in chainlink and planting a tree on a building to mean skyline. Our shoulders have rise to waterlevel in storms we assembled from junkyard pedigree. Nightly a horn sounds at the club corridor’s left earlobe, freighter pendant belly-up, spiked sleeper hit mouthing oiled words. The police are raiding shopping carts again, eight jackets reach open armed across the intersection, crows stride the fingerbridges swing claws in eye-yellow rings around the loophole we crouch in. around the peak of the house rain frames another peak. Half-shut our eyes guide us through the ocean cloud palindrome the slick watchstrap binding mountain to knee, weather is our tourniquet. (Alex Leslie)

Given their past few years of publishing, I’d be interested to hear interviews with Nicole Markotić and/or Aaron Peck on their prose works [see my reviews of such here and here], both of whom I’d highly recommend. The issue talks on narrative, and takes a number of approaches, from a photographic series titled “The Library” by Kyla Mallett, selections from Gail Scott’s novel The Obituary (Coach House Books, 2010), a combination of text and visuals by Jordan Abel, and a short selection of works-in-progress by Michael Turner, “9x11,” a poetic follow-up to his impressive novel 8x10 (Doubleday) [see my review of such here]. Part of what I wonder for a number of these writers, what does the idea of narrative mean for each of them? What are they attempting to achieve through their individual works? Many questions, and the issue opens up as many as it answers.

A crow flaps four times over the Illingworth Kerr. Then a dog’s yelp. Frequently, 15 times 14 equals ESL lessons in her basement. Dionysus trumps Capricorn. True datum. Farmers forever fantasizing over crop circles forensics. Conchology, but with a lemon. Lastly, lastly, can’t a peon march in tune with the pity parade? Vestiges of caramel juice, mint on your forehead. Fingerprint under your chin, no under. But I wanted to want, and that’s why this train ride has multiple shell games. Driven by ferroequinology, forsooth! Please be careful when it comes time to unpack the vocabulary. Egg shell; sea shells; hell’s bells. You know, box o’wit isn’t always the only answer. Lit radio may correct, but I can hurl two stones farther than a straight line. Way. Or absolve the semi-colon; boxed in with the shock of locomotive. Farther than back there. (Nicole Markotić)

Another intriguing element of the issue is George Rammell’s “Crime Scene on Ice,” a site-specific exhibition/installation created in 2010 for SilvrettAtelier, “a biennial summer art symposium in the Austrian Alps.” In the work, he creates and records a contemporary version of “the 5300 year old Otzi Ice Man,” and the objects that would have been carried by him had he disappeared today, to “reconstruct the crime scene with modern equivalents of Otzi’s possessions […].” As Rammell writes:

Otzi’s possessions included a bronze axe, sophisticated fur and leather clothing, and a tethered pouch of wood conk mushrooms (Fomes Fomentarius) whose antibiotic properties relieve the systems of arthritis, which was evident in Otzi’s joints. He had 57 tattoos on acupuncture points throughout his body, possibly made to relieve his pain. His hair and lungs contained arsenic from inhaling copper fumes, suggesting he was a coppersmith 500 years before it was believed the Bronze Age began. An analysis of the mineral content in his tooth enamel indicated he was raised in valley to the south, 60 kilometres from where he was killed. His stomach contained einkorn bread, made from wheat that originated in Asia, deer and ibex meat, and, most notably, traces of pollen that revealed he was attempting to cross the Tisenjoch Pass in early spring, when unpredictable snowstorms are not uncommon.