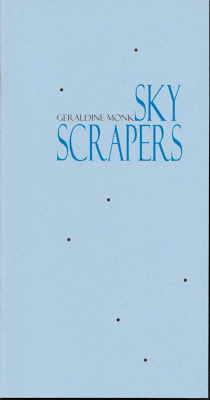 I recently received a package of chapbooks from a press I hadn’t previously heard of, Fewer & Further Press of Wendell MA, with titles including Andrew Mister’s Hotels (2007), Clark Coolidge’s Counting On Planet Zero (2007), Shannon Tharp’s Determined by Aperture (2008), Arlo Quint’s Drawn In (2009), Geraldine Monk’s SKYSCRAPERS (2010), John Godfrey’s Singles and Fives (2011), Laurie Duggan’s Allotments (2011) and Stacy Szymaszek’s austerity measures (2012).  Going through these chapbooks, Fewer & Further Press appears to favour the sequence, and has a reach far further than the continental United States, publishing poets from the United States, Europe and Australia.

after drenching and departures

(theatrics breaking out of bounds)

almost wrote on the wall
‘we’re straining the day out’ (“CS,” Geraldine Monk)

A reissue of a chapbook originally produced by U.K. publisher Galloping Dog Press in 1986, Geraldine Monk’s SKYSCRAPERS is a sequence of short poems built on clouds, each with a two-letter title, from “CI” to “CS” to “AS” to “NS.” Through ten poems, Monk stretches the fluidity of cloud-poems, using the space and the stretch of the open page in lines that float apart, dissolve and cloud together, in the most tenuous of connections. Each poem opens its first stanza by naming a type of cloud, and later, opens a stanza at mid-point with “Today.” Writing a sequence of binaries, each first half writes a descriptive of cloud, and the second, grounds the poem temporally on the ground.

halfway round the world
friends assemble an exhibition
of our former lives:
Coalcliff circa 1980;
photos of us, younger,
me washing dishes before the louvres,
out of my depth in a ‘career move’
that didn’t come off: scriptwriter
with skills for neither plot nor dialogue;
a house on sinking land,
(warped corner of the living room) (Laurie Duggan, Allotments)

Twenty-nine in number, Australian poet Duggan’s Allotments appear as fragments of something larger, less than stand-alone poems. What is Duggan working up to, his slow way towards? They read like small observational pieces, but with a slight skid towards abstract, leaving a door open where others might close. His poems read deceptively straightforward, even the ones that might be no more than they appear.

Sears Tower
harbinger for
trip over

useless crutches
at Holy Hill
we left nothing

flew East
with one
carry on (austerity measures, Stacy Szymaszek) 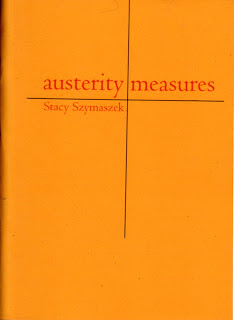 The most striking of the small selection of chapbooks, Szymaszek’s austerity measures works as a poem, as well as a sequence, building up an accumulation of sharp, short pieces into something absolutely devastating. At one point, the poem reads “slow down,” and it nearly feels redundant, as though the entire piece requires the reader to slow, absorb with attention, to really comprehend what the poem is doing. Creeleyesqe in the adherence to short lines and small moments, she even quotes him, slyly, within the bounds of her extended piece. Some sections appear self-contained, and others, points along a further, lyrical line.

Jess Mynes, the proprietor of F&F Press, also has a abeautiful book out called "Sky Brightly Picked." It was put out by a British press, though. And "Singles and Fives" is fantastic!