What does it take
to stay warm?

Fire in a cage,
gnawing on wood,

Each baby’s soul
is cute
in the same way.

Rapt attention
on a stalk, 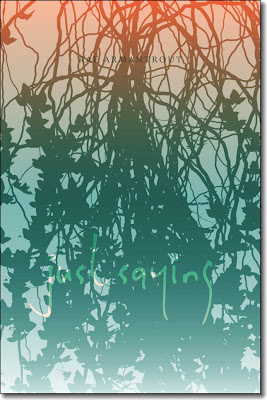 “What might be said // to writhe // professionally // as the days // nod and wink.” writes Rae Armantrout, in the title poem to her new collection Just Saying (Middletown CT: Wesleyan University Press, 2013). Author of a dozen trade books, San Diego poet Rae Armantrout is a master of the abridged, condensed, packed line, composing poems that appear incredibly simple, and yet, contain multitudes. Over the course of her career, Armantrout has the rare ability to write to the pure essence of complex ideas, boiled down into short, basic phrases.

Armantrout writes direct statements as punctuation, assembling statements, fragments and other lines in such a way to give her poetry the impression of existing as a single, extended work. “We will understand each other / perfectly.” she writes, in “My Apocalypse,” later writing in the poem “Entry”: “Children prefer counterfactuals.” These lines might not connect through direct meaning, but through the self-contained quality of each, her remarkable cadence, and how she structures her poems out of a series of small, linked moments, each of which link up with each other into the structure of the book. Her poems fit entirely into and against each other, akin to the poetry of American poet Fanny Howe or the late Alberta poet Robert Kroetsch.

See something, say something.

Jotting in a notebook.

Carrying oneself
in a defensive posture.

Jotting in a notebook.

Where Money Shot [see my review of such here] referenced the American financial crises, Just Saying explores the complex nature of the American economy, both financial and through a particular kind of shorthand that she composes nearly as a series of notes. As she writes to open the poem “Instead”: “To each his own / severance package. // The Inca / hacked large stones / into the shapes of / nearby peaks.” Armantrout’s is a poetry grounded very much in her real and immediate world, while making connections to something far larger and far greater than itself.
Posted by rob mclennan at 9:01 AM
Labels: Rae Armantrout, Wesleyan University Press