NOT A VERBAL EQUIVALENT

You said one thing as a way of not saying something else.
You wrote something so that other things wouldn’t be written.
You drew me a picture of one thing and not anything else.
I’m trying to figure out how this applies to what you’ve gone
And done in case, by doing so, a solution to the problem we’ve been
Having no success solving makes itself evident. For the sake of
Argument, let’s say I’m a crime and you’re a clue and someone
Else, we don’t know who, is the detective. We’re on the Wind
River and it’s twilight and you have on your windbreaker of many
Pockets and I have on my boots in which I hide whatever needs
To be hidden. To be perfectly accurate you are barefoot and I
Have nothing to hide at the moment. Wild geese. Two butterflies
Of black and blue geometry. A coal train. Skid marks on the
Curve in the road that will point us slowly into a nearby cave. 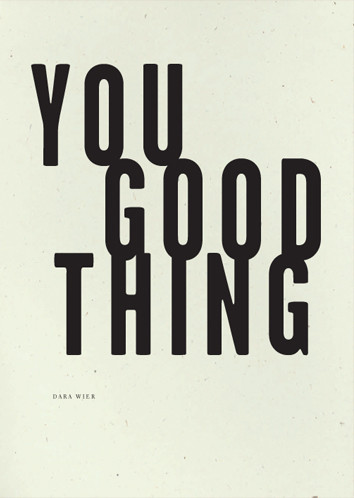 North Amherst, Massachusetts poet Dara Wier’s new collection of poems, You Good Thing (Wave Books, 2013) is a collection of self-described “loose-sonnets,” akin to a form that Toronto writer David W. McFadden has been exploring deeply over the past few years as well. Combining a long cadence with a strong narrative, You Good Thing is constructed out of forty-two sonnets that explore the long sentence, and sweep through and around a series of observations, breath-takes and commentaries on social issues and globalization, with titles such as “THIS MACHINE KILLS FASCISTS” (quoting that famous line scratched into Woody Guthrie’s guitar), “AT ISSUE WERE THE WAYS / WE WOULD WELCOME THEM” and “MANY SIMILES ARE PROTESTANT, / MOST METAPHOR IS NOT.” Much in the way of Anne Carson’s Short Talks (Brick Books, 1992), You Good Thing is a collection of poems composed as a series of small essays on being alive in the world. In this way too, she and David W. McFadden might get along quite well.

MANY SIMILES ARE PROTESTANT,
MOST METAPHOR IS NOT

For your life you plead as you find your neck’s up to something
With little or no rope to spare and no leg to stand on as dry as a
Riverbed following ten drought-filled decades in episodes, so
The scales will not fall from your eyes, as they are scales of
Rivermud crusted and curled up and not on your eyes anyway.
You begin to feel as though you’re just another random person
And you like that feeling enough to hang on to it the way you
Can hang on a strap in a rampaging piece of public transportation.
A ship is waiting to pass by you, to inspire you, to send you a
Message, to point you in, it can’t be the right direction in order
For you to find in your own mind what your next move will
Be. On the way a tree dematerializes and passes through
Your brain, frightening at first until you relax and let it.
I was glad it was winter, I was glad there were no birds.