Arielle Greenberg was raised in Niskayuna, New York, home of the first Shaker community in America and eight and a half miles from where Mother Ann Lee is currently buried. She was pregnant with her second child when she conducted the research for this book in the summer of 2007 at the Shaker Heritage Society in Colonie, New York and at the Sabbathday Lake Shaker Village in New Gloucester, Maine, home to the only living Shakers left in the world (four at the time of Arielle’s visit, including a recently arrived young novitiate). She tried to keep this pregnancy a secret from her mother, from whom she was estranged, but her mother found out about the pregnancy in early November 2007, when Arielle had just entered her third trimester. Arielle began having nightmares and visions of the pregnancy being cursed, and about two weeks later, the baby died in utero at thirty-one weeks. He was named Day, and was born and buried in Maine in December of 2007. (More of the story of his birth and death can be found in Arielle’s book with Rachel Zucker, Home/Birth: A Polemic.) (“ABOUT THE AUTHOR”) 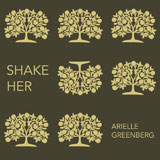 I don’t often begin with such biographical detail, but the new edition of American poet Arielle Greenberg’s chapbook Shake Her (Brooklyn NY: Ugly Duckling Presse, 2012) appears to require it. Originally produced as part of the 2008 dusie kollektiv, Shake Her is a startling, heartbreaking and complex collection of poems. Constructed as a scrapbook of poem-sketches and footnotes as part of ongoing studies into the American Shakers, Greenberg’s Shake Her feels very much part of a much larger frame than the boundaries of the immediate publication. At roughly thirty pages, this is a book that ties the narrator as mother to her own mother to the historical figure of Mother Ann Lee (1736-1784), founder of the American Shakers. Through the narrative of the poems, the connection is one that binds the three throughout, eventually moving into the loss of Greenberg’s second child. In one of the first poems, she writes: “I’d be stupid to pretend there wasn’t all that sky-writing / when I was a child and you were my mother.” (“SKY-WRITING”), and the loss of her mother (“to California, and to illness physical, and to illness mental, and to general anger,” as she writes in the poem “THIS IS WHERE I CAME TO KISS (ALBANY, NY)” ) is deeply felt .

My mother has a lovely face of fur, I once wrote,
and has to go to a meeting.

As in a fairytale, there’s a hole in my book where a mother should be,
a hole in my head, caught in my throat,
a hole in my fine felt heart worn on a fob.
There’s a hole big enough to push my finger through
and flex to feel the flood of air I am damming.
This hole die-cut in my life and peered out
to an illuminated page with a castle and a rook,
this round, voided space, my mother.
The hole that hills yell through.
If I followed the familiar paths—was orphaned,
taken to the wolves or the witches or left in spindled knots—
well, as in I am living the good life without,

The author of two trade poetry collections, My Kafka Century (Action Books, 2005) [see my review of such here] and Given (Verse, 2002) [see my review of such here] and the chapbook Farther Down: Songs from the Allergy Trials (New Michigan, 2003), as well as the co-author, with Rachel Zucker, of the hybrid genre nonfiction book Home/Birth: A Poemic (1913 Press, 2011), Greenberg has written numerous poems on mothering and motherhood, and her work compares with some of the rare best of a genre that far too often falls into sentiment and cliché. This short chapbook is stunning, and works, in part, to highlight how long it has been since a trade collection of her poetry appeared. Shake Her feels like something much larger that we haven’t yet been able to see, whether still in-progress or left waiting, unfinished. I want to see what the rest of this looks like.

THIS IS WHERE I CAME TO KISS (ALBANY, NY)

Some Hints of a Religious Scheme, Taught and propagated by a Number of Europeans, living in a Place called Nisqueunia, in the State of New-York, Valentine Rathburn (Salem, 1783): “They begin by sitting down and shaking their heads in a violent manner; turning their heads half round…their eyes being shut.”

I walk the ground for once a childless mother. The thistle, clover, wind and bug-sticky heat are all what I communed from when I was young. The roosters look like perfect folk paintings of roosters, almost kitsch, almost sacred. It is as if the present tense were itself trembling.

Around the corner, the small airport where I used to come to kiss, when I was a virgin and my boyfriend had a hatchback and we both lived at home with our families. It is as if the tide of my next child is already breaking, did break, will break, because waves are just a thing the water does again and again.

I think of myself as a person who, if no path is clearly marked, simply will not start walking. But here I walk, because I am a mother with no child with me. A mother enveloping a secret next child. A child with no mother, with a mother who will not walk beside me. Simple is a fallacy.

A big bee bumbled by from the pages of a children’s book I read to my daughter last night at bedtime. I could sleep or die or birth here, out in the open, in this forsaken and holy farm, its medicinal herb garden still tended, made to look new by volunteers. I could be, finally, that orphan, a free spirit, and bound only to this plot of star flower, Indian cup, and ghosts.

______
I want to go to my Mother; I am sick to see my Mother; I had no God till I had a mother; how could I be born without a Mother? What reason I have to bless God for my mother.