I never choose poetry—still haven’t. I’ve always had the idea that if I ever write anything really good, it will probably be prose. Some prose or other. (Actually, I must admit, one of the few genres I’ve never taken seriously is the interview.)
Something, by the way, that I’ve never understood: for every person who wants to write poems, there seem to be a hundred who want to be a poet. In the sixties, you know, it was a widespread notion that you didn’t have to write poems to be a poet, that in fact the “purest” poets wrote nothing at all. Perhaps it’s a peculiarity of mine that I can see wanting to do something (or make or have something) but I can’t quite fathom wanting to be something. (Also, I must say, purity’s not a priority of mine. The determination to will one thing leads to the ridiculous idea that there is only one thing.)
I do intend to write more. Poems, or whatever. I’ve written less theatre than other things—probably what I would like to do most immediately, along with more songs. (Keith Waldrop, “Real Shadows: Interview,” conducted by Peter Gizzi)

I hadn’t even heard it was coming, so was floored to receive a review copy of Rosmarie and Keith Waldrop’s Keeping / the window open: Interviews, statements, alarms, excursions, edited by Ben Lerner, with an introduction by Aaron Kunin (Wave Books, 2019), a hefty and stunning collection that acknowledges both Rosmarie and Keith Waldrop as a creative duo, in their separate and combined selves as writers, editors, translators, supporters, instigators and publishers. At nearly four hundred pages, the book includes bibliographies for each of them, a complete bibliography of their small literary press Burning Deck (1961-2017), their introductions to the first two anthologies celebrating Burning Deck anniversaries (the first twenty years and the second twenty years), and, whether in full or excerpted, numerous interviews, sketches, notes and hefty amounts of reprints of long out-of-print works by both Rosmarie and Keith, including their collaborative memoir-dos-a-dos Cesi nest pas Keith / Cesi n’est pas Rosmarie (Burning Deck, 2002), a work I had long been interested in, and wanting to get my hands upon:

I burrowed into a heap of potatoes as the ground shook. People prayed. When we climbed out of the cellar there were no streets, no rows of houses. Instead: craters, heaps of rubble, mortar, stones, walls broken off, a craggy desert, air thick with dust. A few houses were left standing. They seemed out of place, incongruous with their insistence on boundaries, definite lines. Mother hurried me up to our apartment and tried to patch the shattered windows. Father came back late from digging up bodies.

It was the first drastic change of my world. A second followed in 1945, a not exactly Nietzschean revaluation of all values. “Our leader” turned into “the criminal,” “the enemy” into “Amis,” “surrender” into “liberation.” This went deeper. And took years to understand.

I have always thought of poetry as a way of building a world. The world is certainly not a given, even if it occupies more and more of the sky. Building a counter-world, not better, but other.

After this bombing, nobody would consider taking shelter in a cellar. Rather catch it in the open and a quick death. Rather jump on bicycles at the first alert and make for the woods. Or flat in the ditches as the planes came roaring.

School stopped. We kids ran wild. The ruins became our castles. With an undercurrent of terror that we might find real bodies in our imagined dungeons. (Rosmarie Waldrop) 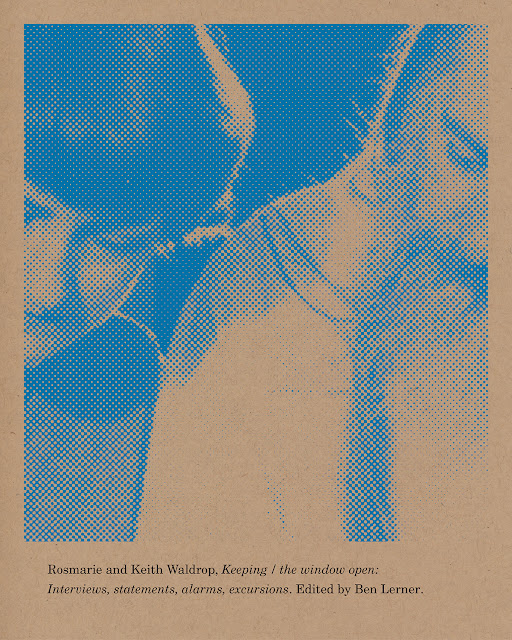 I don’t think I could overstate how important this book is, or how much more time I’ll require to fully absorb the massive amounts of writing, thinking and living lovingly curated into a volume that must have taken a great deal of time to put together. The wide-ranging volume of the collection articulates the considerable effect the two of them have had on American poetry, from their individual creative and critical writings, their translation work and years of active mentoring, even before the incredible amount of editing and publishing work, most of which was centred around their literary publishing house, Burning Deck, one of the most important American smaller literary presses of the past half-century. Part of what made their press, and their work as well, unique, was for the connections they made to contemporary writing from other countries, refusing to remain exclusively within the American bubble, but translating and writing on multiple writers from across the Atlantic, including Ferdinand Alquié, Claude Royet-Journoud, Anne-Marie Albiach, Edmond Jabès, Dominique Fourcade, Pascal Quignard, Xue Di, Jean Grosjean, René Crevel, Paol Keineg, André Breton, Pierre Reverdy, Esther Tellermann, Marie Borel, Charles Baudelaire, Peter Weiss, Alain Veinstein, Helmut Heissenbüttel, Emmanuel Hocquard, Friederike Mayröcker, Elke Erb, Peter Waterhouse, Gerhard Rühm, Elfriede Czurda, Farhad Showghi and Jean Daive. While the Waldrops certainly didn’t invent literary translation, they may have perfected it through a thoroughly-engaged conversation between literary cultures, and the enormous amount of work they did in this direction most likely (I say, speculating, as my overall awareness of foreign translations of poetry entering the United States isn’t as sharp as it could be, to speak on such a thing) was an incredibly important bridge between American writing and other parts of the world. “A translation happens at a particular time,” Keith Waldrop wrote, in his February 2002 essay “Translation as Collaboration,” “in a particular place, and through a particular agency—a scholar, a writer, a committee … The work that then appears is, or hopes or pretends to be, the double of a previous work in a different language. In this respect it may be more or less successful. But it is also, and importantly, a work of its own time.” A bit further in the essay, he writes:

My thesis is so obvious, I hate to come out with it directly. But here it is: the translator is a collaborator, not exactly with an author, living or dead, but with a text. Thus there are two phases any translator must go through: first to read something, then to write something.

My entry point for such a collection comes from my appreciation and knowledge of Rosemarie Waldrop’s work, as her work has been a touchstone for my own for at least fifteen years [see my review of her latest here; see the chapbook I produced of hers here]; despite this, I know a great deal less about Keith’s output, and have but a scant contemporary overview of what Burning Deck has accomplished, something I’m aware of abstractly, and through review copies received over the past decade or so. What is glorious to come to realize, in a deeper sense, is not only those elements of the two as individual writers (I am appreciating the opportunity to get a far better sense of Keith Waldrop as a writer), but Rosmarie and Keith as a creative unit, one that seems to have been, for a very long time now, an enviable standard. Early in his generous introduction, Aaron Kunin writes:

At the same time they are the most creative people I know. Robert Creeley called them “the wonderful, regenerating Waldrops.” That word regenerating is good. Look at the masterpieces of collage they have generated—or regenerated, if you think of collage as a process of turning books into other books. Look at the books in other languages that they have regenerated by translating them into English.
Part of what’s inspiring about them is their sheer productivity. They have written a lot, translated a lot. They also publish Burning Deck books; Keith makes visual art. they are always reinventing themselves, always trying something new, always writing, always curious about what other people are writing.
Isn’t that the best way of being an artist? When you hear them talking in the interviews collected in this book, you notice that they generate still more than they manage to get on paper. There seems to be no time when they are not proposing solutions to some technical problem of writing poetry. Everything they say could be a poem.