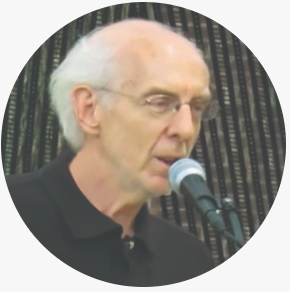 B. F. Späth resides uncomfortably in a remote location, hopelessly surrounded and outnumbered by his loved ones—which include the ghost of a long-deceased cat—amid an impressive collection of unpaid bills. Escape seems unlikely. Firmly believing that everything worthwhile has already occurred, he passes the time by strolling through imaginary amusement parks. He spends his nights in a condition that outwardly resembles sleep, but in fact, is nothing of the sort. He suspects that his life may be based on a true story, and has made it his life's mission to discover the plot—if any.

My first book was Clocks Stopped at a Strange and Savage Hour, 2008, Serious Ink Press. It forced me to give readings onstage (against my will!) at various local venues in NYC. Initially I was petrified, but after a few appearances, I settled down a bit. I began to appreciate the differences between the written and spoken word. I learned a few things about the rhythm of words and how emphasis on certain words can profoundly alter their impact.

My most recent work is a novel, The Sun Temple. This one is much more tightly organized and structured than my previous one. I began to incorporate several techniques such as italicizing a group of words in the text, thereby suggesting that they are actual books. I like the idea of “books” spontaneously and organically emerging from the narrative. I also began to insert brief passages and quotes from antiquity that informed the narrative. And a certain species of dry humor spontaneously began popping up here and there in the story, which served to leaven the often grim and downbeat situation of the narrator.

Clocks Stopped is a schizophrenic sort of book: split between short prose stories, and “abstract” poetry. It was perhaps an uneasy relationship. With Sun Temple, I instinctively chose a first-person present-tense narration. It was only in hindsight that I realized how much I had been influenced by writers such as Poe, De Quincey, and others who wrote in this style. I also realized that I had adopted the first-person, drug-confessional narrative made famous by DeQuincey, Burroughs, and others.

Another reason that I chose fiction is that my mind is profoundly disordered!—and is naturally prone to digression, stream-of-consciousness, and flights-of-fancy.

Sun Temple is autobiographical, and concerns experiences that I had in 1992—93. At the time I had written a two-page little piece that chronicled these experience. But it was written without any intention of publishing or expanding it. It wasn’t until 2010 that I returned to it and over the next three years turned it into a full-length novel. So yes: it was a slow process!

In 2004, I began keeping a regular journal every day, and most of Clocks was taken from these journal entries.

Sun Temple came to me fairly easily and spontaneously once I got into it. At the time I had been taking notes for an intended screenplay, which included research into the spiritual use of cannabis in ancient cultures and religions. Quite a bit of this information seemed to naturally find its way into the pages of Sun Temple.

On the other hand, my current WIP (working title: The King of Atlantis) is swamped under four full notebooks of ideas, outlines, passages, and references. This one is not coming easily! I have way too many ideas and notes!

And I still haven’t found the right voice or tone, even though I am continuing to use some of the techniques that I employed in Sun Temple.

I refer you to my answer to Question 3 above!

Since you put the word “book” in quotes, you have reminded me of a certain trend in my current WIP: the idea of a labyrinth of “books” that are referred to in the narrative: they accumulate, refer to each other, have dialogues with each other, and eventually threaten the sanity of the narrator! My own journals also function as “books” and are starting to assume a greater presence in the story. I have a love-hate relationship with my journals: I frequently denounce them in vigorous fashion! At other times I assign them wistful, melancholic, and beatific qualities. I suspect that the journals are slowly turning into “selves” or versions of myself, and also assuming an increasing gravity and mythic quality.

I find them extremely difficult—but I am getting better at them! I have made numerous recordings of each Sun Temple chapter, striving to make my readings more impactful and dramatic. I have also been able to memorize several key chapters. I think that I am lately becoming more effective in my performances. I read at the NYC Poetry Festival on Governor’s Island last summer, and no one threw anything at me.

All of my writings are concerned with exploring the self, from a psychological, emotional, and mystical standpoint. Sun Temple is a book of great extremes: from the dark despair of a NYC tenement to moments of pure transcendence and spiritual ecstasy. The new WIP will be informed by many of R.D. Laing’s theories and insights, as well as mystics from the ancient world.

I am also keenly interested in the relationship between mystical/abnormal psychological states and the perception of objects, cities, and environments. The city is also my subject. The physical spaces that we move through, streets, parks, buildings, they all seem quite mysterious to me.

If I were to compare myself to a single writer, it might be Fernando Pessoa, who wrote from a profound detachment and estrangement that gave his work such an otherworldly quality.

Perhaps a writer ought to be a kind of empath who listens for murmurings from antiquity, who tries to divine invisible patterns and currents, who perceives traces of ancient ritual pass across the countenances of people in the street. Someone who lives outside of time. Or perhaps a writer would do well to craft hard-boiled detective stories and crime fiction! Or paranormal romance!

The gathering trend to express ourselves with emoticons is quite interesting: back to ancient hieroglyphs and symbols! I am not at all opposed to it! It is language, after all.

The fact of our living in the digital age is so overwhelming, complex, and unknowable, that I don’t even attempt to analyze it.

In order to ward off entropy and writer’s block, one ought to “Write 200 crappy words a day, without fail!” This advice is magical—it’s a psychological trick, really: the pressure is off, because it’s easy! I have used this advice for several months now, and the surprising thing is that in each of these 200-word efforts there exists some good, usable verbiage! The key is to take the pressure off of yourself and just let go.

10 - How easy has it been for you to move between genres (fiction to poetry to painting to screenplays to music)? What do you see as the appeal?

Nothing is easy for me. I struggled for over 30 years trying to be a painter, only to realize in the end that it wasn’t my “real work”. I am a very late bloomer: I didn’t start writing till I was in my late fifties—I am scrambling to make up for lost time!

My day begins in the coffee shop: I inscribe petty complaints and bitter recollections in a cramped and curmudgeonly script. I rely heavily on highly annoying people, and wretched and inexcusable music to provoke me into spilling my guts onto the page. When I have reached a state of complete resignation, that is when I walk over to the public library, where I sift through my entries and extract a few gems hidden amidst the dross, and type them into a WORD document. I go home for lunch--then return to the library for more of the same.

Without fail, I turn to antiquity—Mesopotamia especially! Ancient cultures provide a relief from all of the modern horrors, as well as inspiration.

When I am really stuck and frustrated, I also make use of an online digital “cut-up” machine, which cuts up your text and re-arranges the words, and is derived from William Burrough’s method. http://www.lazaruscorporation.co.uk/cutup/text-mixing-desk

Freshly-cut grass! I will take the liberty of quoting from The Sun Temple:

“A left turn finds me at the Great Lawn where I grow light-headed from an abundance of oxygen and the fragrance of freshly-cut grass. But these aromatic blessings do not arrive free of charge, because they remind me of the Lost Lawns and Gardens* of my late lamented youth.”

[* Please note the example of an implied “book”]

Deserted streets, empty parks, abnormal weather conditions, and most of all: The Lost City of Manhattan!

Get a secondary income stream to augment my Social Security, so that I can afford fresh fruits & vegetables!

The question is moot because I am not suited for anything except day-dreaming, idle gossip, and morbid introspection. In short, I am completely unemployable!

Keeping a daily personal journal was a necessary and desperate act of self-preservation.

The Manuscript Found in Saragossa, Jan Potocki, written at the turn of the 18th and 19th century.

Manuscript Found at Saragossa, 1965, directed by Wojciech Jerzy Has.

A autobiographical novel that chronicles the three years that I lived in the Bennett building in Lower Manhattan, a few blocks from Ground Zero, soon after the attack.