The web is washed and primed. They will paint it violet and the whores are at Denny’s deciding between sweet or savory and when ghosts arrive at your door, begging for treats, you welcome them into your veil. Let them smell your hair, the shampoo that makes you coconut and the citric quench of an iced greyhound. The widow hammocks you with her tresses, putting all your tricks to sleep. (Arisa White)

In case you haven’t heard of American writer Daniel Handler’s Per Diem Press, it self-describes as “an extremely independent publisher dedicated to elegance, ferocity, and bewilderment, funded by cash given to the proprietor whilst visiting the set of a filmed adaptation of his work.” Literally funded via the per diem the author received through the filming of the Netflix adaptation of A Series of Unfortunate Events, the press announced on Handler’s Facebook page as an open call for submissions, with three titles to be selected from whatever came in. As he posted on his page, back on December 15, 2016:

Over the past year or so I have spent some time in Vancouver, peeking at the Netflix production of A Series of Unfortunate Events. Every day I am there, I am given a small handful of American dollars - a “per diem” designed to cover my expenses. I don’t seem to have any expenses - I’m on the set all day long - and in Canada, this American cash seems particularly silly, so it’s remained unspent.

In time, this became a somewhat substantial amount of money, and I began to think I should do something suitable with it. Thus, the establishment of Per Diem Press, which will publish a single chapbook of poetry in early 2017, eight 4” X 5”pages, saddle-stitched, with a cardstock cover, hopefully designed by the noted illustrator Lisa Brown just as soon as I make her a martini and ask her. The poet will receive $1,000 and a nice stack of copies. The remaining chapbooks will be distributed to my postal club and on the road as I promote my forthcoming filthy novel All The Dirty Parts. If logistics permit, the poet and I will read together at least once.

I absolutely love that Handler chose to produce small books with this money, and am rather amazed that he would be generous enough to even consider such a thing (I’m reminded of when Michael Turner was given a hefty advance from Doubleday, circa 2000, and shifted part of the money into a short-lived imprint he edited through Arsenal Pulp Press). Almost immediately after I sent my own submission (naturally) in to his open call, I was startled to discover in my files that Handler had actually been an above/ground press subscriber a decade earlier, back in 2008, which provided the knowledge that his interest in poetry, and chapbooks, had some kind of history (my knowledge of Handler’s generosities on social media I’ve known of for some time, but my knowledge of his work or interests otherwise remains embarrassingly thin), and one I was thrilled to realize I was some incredibly small part of. The result of his initial call, according to an article of Handler’s posted at Lit Hub, was some 1,200 submissions, which were then whittled down to not one, but three elegantly-produced chapbook titles, each of some eight pages of writing, all of which appeared in 2018: first one thing, then the other by Elizabeth Clark Wessel, “fish walking” & other bedtime stories for my wife by Arisa White, and jurassic desire by Rohan Chhetri.

I can’t seem to write anything anymore.
Not sure if what it is is sadness
or just an anxious pressing away
or the absence of.
I can tell you
I was comfortable all day,
my stomach full when I wanted it to be.
They scraped my teeth clean,
and I bled like an ingénue in a horror film.
Decay here and here and here, the dentist said
pointing to shadows on the photos of my yellow teeth.
I paid with my blue credit card,
which I use for personal expenses.
It was cold outside, but the sun was shining.
It was a day on earth
I read for a while and had sex in the afternoon.
I didn’t feel the baby move and wondered about
that dim space inside, where everything was being
primed for a mind. I didn’t clean a goddam thing.
My body got older and uglier.
I avoided the mirror. (Elizabeth Clark Wessel) 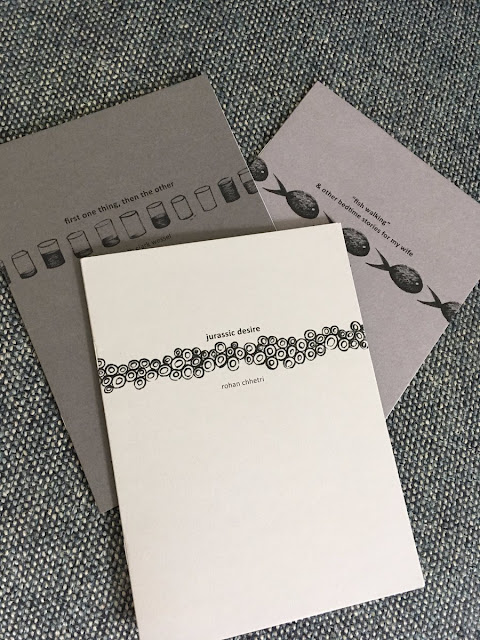 I’ve known the name Elizabeth Clark Wessel for a while now, although I can’t for the life of me figure out why, given I haven’t read any of her four other chapbooks (I suspect I’ve seen her name around in a variety of journals, etcetera, as well as here). The poems in her first one thing, then the other read as singular, ongoing thoughts, working and searching their way toward reason. Hers are theses in search of themselves, arguing and reaching in every direction until the narrative allows the through-line to make itself known; hers are poems less concerned with conclusions than with attempting to seek out the appropriate questions. As she writes to open the poem “night”: “Where are the best poems of your life  Have they already passed you by / Can you even go straight for it / You don’t feel brave / You feel uncertain [.]”

Arisa White’s “fish walking” & other bedtime stories for my wife is a wonderfully rich and striking collection of dense prose poems composed with the care, cadence and halting breath of bedtime stories for more mature ears, containing wisdom and depth and a deceptive calm. “She gave up her mustang for the carousel,” she writes, to open “her heart, her horse.” A New Yorker living and teaching in Maine, White [see her ’12 or 20 questions’ interview here] is the author of numerous full-length collections, including Black Pearl, Post Pardon, Hurrah’s Nest, A Penny Saved and You’re the Most Beautiful Thing that Happened, which was a nominee for the 29th Lambda Literary Award.

The poems that make up Rohan Chhetri’s jurassic desre are expansive and ambitious, composed as a series of lines that tumble, accumulate and threaten to overwhelm by how much they contain. His poems exist as narratives describing the minutae of scenes-as-objects, turning each story around and over to catch what others might have easily missed. I’m amazed by how much they contain. Nepali-Indian poet Chhetri’s full-length poetry debut was Slow Startle (Winner of the ‘Emerging Poets Prize 2015’), published by The (Great) Indian Poetry Collective; since the publication of his Per Diem chapbook, a second full-length poetry manuscript was awarded the 2018 Kundiman Poetry Prize, which includes publication through Tupelo Press. The second section of his poem “restoration elegy” reads:

The sundown flaring over the pacific,
& the one long fold of a wave trying to swim back
to shore. The evening air a cross between lantana
cameras & eucalyptus, both airy signposts of childhood,
like an old croon of a ghazal in praise of alcohol
remembered only in a regressing sadness now.
You hear the river back home has changed its course,
flooding through the living rooms of your town,
an angry murk roiling with a singular desire to bring
to surface every lost map of your grandfather’s revolution.
In the valley, they haven’t finished blinding the children
with the 12-gauge, & somewhere else they’re erasing
borders as the bombsites turn green over hurried graves.
In the half light, walking up to your apartment,
the evening fog looming over the ridges, you encounter
a family of deer come down from the barren hill
to nibble on dates & blue-eyed grass. At night,
you hear the coyotes howl, & you pray for the fawn,
the only startled passenger of the unit, no more
than a few weeks old, flicking its clean ears & wobbling
by the bottlebrush, not used to the stench of the animal
hunger that stops its mother still on her tracks.