Through three earlier poetry titles, all of which were produced by Beth Follett’s Pedlar Press—Small Arguments (2003), Found (2007) and Light (2013)—Toronto poet Souvankham Thammavongsa’s work has focused on silence, precision and a reclamation, whether of materials, history or of language itself. Her fourth full-length poetry title, Cluster (Toronto ON: McClelland and Stewart, 2019), furthers these explorations in lyric meaning through a series of stretched-out sequences, many of which are pulled apart and across the page in highly deliberate placements. With lines set seven or eight lines below the line prior, Thammavongsa’s pauses, her silences, are crafted as carefully as the lines themselves, such as the poem “O” that opens:

When this letter is written out by hand

Where it begins and ends land in the same place

It is a gesture to single out what isn’t perfect

It marks an outside and an inside 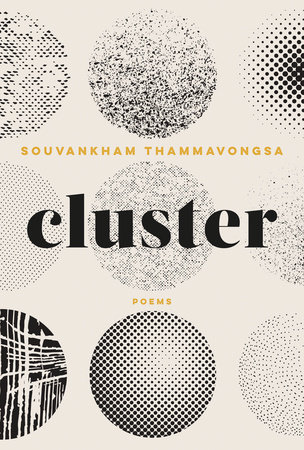 Her minimalisms, silences and use of the page really are remarkable, and I haven’t seen any other poets combine such equal attentions and concerns; there aren’t that many poems that could create such expansive poems with so few words. Cameron Anstee, Mark Truscott and Nelson Ball, for example, utilize their own minimal, compact poems, but in very small forms. Other poets I could reference, such as Sylvia Legris, utilize a similar and equally-remarkable lyrical density, but Legris’ poems engage with physical space on the page, which feels entirely different from what Thammavongsa utilizes through the physical placement of her lines: a carved silence, as opposed to an engagement with lyric space. In Thammavongsa’s poems, her lines feel composed in a tension against that same silence, one that works in conjunction, as well as in opposition, of the words she places upon the page. As the mid-point of her poem “NORTH” writes:

Changes in temperature are a determining factor

Look for the sun and track where it rises and sets

Tell from the shape your shadow casts for you

It will matter to know where you are and when

As part of the recent What the Poets are Doing: Canadian Poets in Conversation, edited by Rob Taylor (Gibsons BC: Nightwood Editions, 2018) [see my review of such here], there is the illuminating and utterly delightful conversation between Thammavongsa and Dionne Brand (editor of this current volume), that includes:

Brand: Everything begins in meaning, which is different from conclusion. I think even if we haven’t discerned it or chosen it or known it we begin in meaning—that is we begin in the world. So it may arrive independent of me, so to speak, because I have no control of all of it, only what floods into me and what I then manage to see through the lens of my experience, the knowledges I’ve gathered.

Thammavongsa: Meaning doesn’t conclude. That is why it means and continues to mean. I wrote something down once, just to record it, that did not make sense to me at the time but many years later reading it over I understood what was said to me. And there was no way to go back to that meaning.