Landward, the cave mouth conspicuously dark.
Halfway between Anstruther and Crail,
singular in the vicinity. Prominent
calcareous sandstone outcrop on a raised beach
level, short lengths of passage
and as spectacularly weathered as the coexistence
of good and evil, the earth pigments.

Anchor in five metres, taking care to avoid
the numerous creel markers. At half-tide
a dinghy may be hauled out where the reef buffers
flat rocks, though they are sharp
and landing delicate, if land you must.
Wind may complicate return to the boat. Any visit
is a lesson in how quickly conditions change.

What is immediately fascinating about Toronto poet and editor Karen Solie latest full-length collection, The Caiplie Caves (Toronto ON: Anansi, 2019), is how it is built: more than a collection thematically or structurally shaped, but a singular, book-length work constructed around a core idea. As the press release offers:

In the seventh century, on the coast of Fife, Scotland, an Irish missionary named Ethernan withdrew to a cave in order to decide whether to establish a priory on May Island, directly opposite, in the Firth of Forth, or pursue a hermit’s solitude. His decision would have been informed by the realities of war, religious colonization, and ideas of progress, power, and corruption, and complicated by personal interest, grief, confusion, and a faith (religious and secular) under extreme duress. 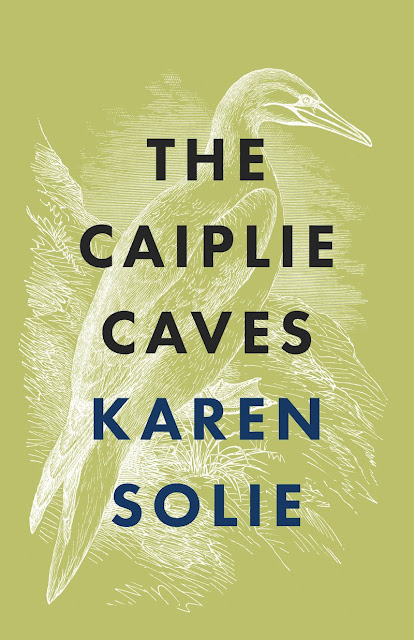 What becomes interesting about this shift is one of approach, as Solie evolves, more overtly, from a writer who crafts poems into collections into a writer who crafts a collection constructed out of individual poems; becoming, at least for this singular project, a poet utilizing the book as her unit of composition. That isn’t to suggest that her prior collections—Short Haul Engine (London ON: Brick Books, 2001), Modern and Normal (Brick Books, 2005), Pigeon (Anansi, 2009) and TheRoad In Is Not the Same Road Out (Anansi, 2015), as well as The Living Option: Selected Poems (Northumberland UK: Bloodaxe Books, 2013) [see my review of such here]—aren’t conceived as or don’t hold together as book-units, but the difference remains on The Caiplie Caves’’ focus on both a historical figure, the hermit Ethernan, and the remote Caves of Caiplie, where he chose to contemplate, situated north of Edinburgh along the country’s eastern coast. As Solie writes of the historically-evasive Ethernan as part of her preface: “A number suggest he was an Irish missionary to Scotland who withdrew to the Caves in the mid-7th century in order to decide whether to commit to a hermit’s solitude or establish a priory on May Island. This choice, between life as a ‘contemplative’ or as an ‘active,’ was not an unusual one to take up among his cohort.” The poems use the contemplation of that choice, between a contemplative versus an active life, as a way to speak both to what is believed to be Ethernan’s historical context as well as contemporary concerns, asking what, indeed, denotes activity, and examining the unexamined life, as in the poem “ORIGIN STORY,” that includes:

To make our own the righteous anger
that keeps some people alive
feels like doing something
so grief and fear don’t stir
under their blanket, don’t open their eyes.

So survival does not seem merely accidental
to the indecision when to lay down
the earthly burdens, the way a quality is accidental
to a substance —

In an interview conducted by Daniel Fraser and posted September 28, 2018 at The Rumpus, she speaks to the tension in her work between the relationship, as Fraser suggests, between nature and human life:

The Rumpus: I want to start by asking you about what appears to me to be one of the prevailing tensions in your poems: the relationship between nature and human life. More specifically, the sense of nature as a force that lurks beneath modernity and continually breaks through the surface.

Karen Solie: I suppose I see the tension not in terms of forces at odds, but in the belief that human endeavor is separate from the natural world. We are natural creatures, and all creatures alter their environments. I suspect that separating the natural from the “man-made” has allowed us to distance ourselves, to neglect the implications of our technology, to compartmentalize our responsibility.

We can see the surface of Mars now (and leave junk there), but down here our problem-solving has been narrowed by power interests. If human life and nature are distinct entities, it allows us to prioritize. Prioritizing “progress” has served colonial enterprises very well. If we think of nature and the human as each going about its business, we can more easily rationalize climate change as an acceptable cost; or, in an absurd extension of this, insist that it has nothing to do with us, that islands of plastic in the ocean don’t exist. It allows us to treat wilderness as a playground, to exoticize people we characterize as closer to it, who we then associate with acceptable costs.

“Nature” is that which “feeds our souls,”  which seems an apt metaphor. Remember that Simpsons’ episode in which a classroom filmstrip diagram of “The Food Chain” shows arrows from all creatures pointing to the human’s stomach? Once in awhile we are forced into awareness of our place in the system, the fact that we are not the end point in the food chain. As climate and environmental events have demonstrated, we don’t have the last word. The fastest and easiest response to this fact is avoidance or hysterical denial. So, in what little poetry—my poetry, anyway—can do, I hope to keep alive, or at least gesture toward, the tension of complexity, complication, responsibility.

Solie writes of isolation, the slippery structures of human interactions, violence and tragedy, and what might cause both body and soul to retreat. “Hatred is a plotting emotion,” she writes, in the poem “KENTIGERN AND THE ROBIN”: “and gleefully inclusive.” She writes the landscape and weather as physical characters, sometimes violent and occasionally overpowering, but also capable of great empathy, capable of providing refuge. While it is entirely speculation on my part, I know, I wonder if there is a correlation between the contemplative life that Ethernan considered, seeking insight on the role and responsibilities of the individual, especially in regards to a spiritual life, and Solie herself, who has famously participated in numerous residencies and retreats over the years, some of which have been full-on retreats (as opposed to a straight residency, which includes interacting with student writers). [CORRECTION/EDIT: Karen Solie points out that she has never actually attended or participated in a writer's retreat] And to step further into that argument, what becomes the role of poetry and the poet when climate change and politics overwhelm both conversation and the news cycle? Perhaps these questions are unanswerable, or miss the point entirely. Still: when one is removed, even slightly, from one’s normal world, it can be easier to catch the fuller picture of that world, allowing an insight that might have been otherwise missed, as she writes in the poem “THE SHAGS, WHOSE CONSERVATION STATUS IS ‘OF LEAST / CONCERN’”:

On vertebral rock near Caiplie Caves
like shreds of an outline or shadows freed
of their antecedents, they dry their wings,
eyes closed, faces to the sun. Centre of no
universe, they have the run of the great ancillary.
Through likely they loom large in the imagination
of the sand eel whose peripheries
they torment. As their shouting did mine
wee hours in the silt of my own domain before
the chicks fledged, presumably, the parents
moved on. And I missed them then, as we do
the ones loved best when not around.