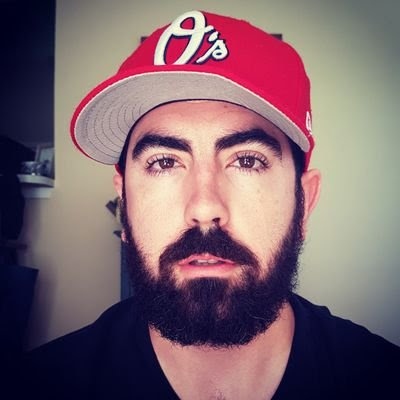 Caleb Michael Sarvis is a writer from Jacksonville, Florida. He is the author of Dead Aquarium (Mastodon Publishing 2019), the managing editor for Bridge Eight Press, and co-host of the Drunken Book Review Podcast. His work has appeared in Hobart, Saw Palm, Volt, and others. You can follow him on Twitter @cmsarvis.

2 - How did you come to short stories first, as opposed to, say, poetry or non-fiction?

CMS: It was really just a matter of what I was reading. I’ve never been a huge fan of non-fiction, and while I liked and even dabbled with poetry, I was much more interested in narrative. I didn’t really read short fiction until college, but it was the first time I remember loving the discussion of it all.

CMS: Time it takes to start something … that feels like a weird idea I can’t quite wrap my head around. I’ll say that I do table some ideas for later, but when it comes down to starting something, I don’t know, I just do it. I open a word doc and I type. It’s rare that there’s a large amount of distance between my first drafts and the final product. I tinker a lot with individual sentences, with cutting chunks out, but the gist of my stories aren’t that far removed from the original draft. I might change some names, give it a new title, but I’m not one for making a lot of notes. I know some writers save a new draft after every edit and that’s obscene to me. I’m a one living word doc kind of guy.

CMS: The only time I thought I was working on a “book” was while writing the novel I’ve just finished. Otherwise I try to focus on one short story at a time. I don’t care to think about how they relate to each other until later, after they’re all finished, and I’m beginning to realize, “Oh, these few here kind of talk to one another.”

CMS: I enjoy doing readings, but only because it’s an excuse to talk about the work after. I’m much more interested in grabbing a beer and talking to people about process and craft and the little things we fight with while trying to write something. Personally, I’m not a great reader. Mostly because I write matter-of-fact sentences most of the time, so when I read them out loud, I sound like I’m droning on to myself.

CMS: Na, not really. Sometimes I get a little curious about structure or form. I’m obsessed with what’s real versus what’s not, and whether that really matters in the first place, and I think all of my writing plays with that, but I don’t necessarily mean it to. I’m just a weirdo who suspects he doesn’t really exist.

CMS: A writer’s only responsibility is to write, and do it well, and help other writers write well, and read other writers’ work and then to keep on writing and reading and writing.

CMS: I told Jason Ockert in a bar that I wanted to be great, and he told me to stop letting my ego do the writing. I still want to be great, but it’s only recently that I’ve begun writing for myself, rather than an audience, and it’s the best thing I’ve ever done.

10 - How easy has it been for you to move between genres (poetry to short stories to essays to sports writing)? What do you see as the appeal?

CMS: It hasn’t been easy at all. I envy poets and essay writers for the care they give their work and the way they can suck me in no matter the subject matter. But as hard as it is, I think you have to challenge yourself. Poets have always given the best craft lectures, I think, or at least I’ve always learned the most from poets. I feel most confident in writing a single sentence, I think it’s the strongest part of my work, and so poetic sensibility is an important part of fiction writing for me. The sports writing is just because I love talking about sports.

CMS: My writing routine is to read a lot, get inspired, and then write until that inspiration goes away. If I write 50 words, so be it, at least I wrote that day.

CMS: What the hell, man. Um … baseball clay? But also peppermint oils because that’s how my wife wakes me up in the morning. She’s got one of those diffusers and that shit rules.

CMS: I say this a lot, but Calvin and Hobbes, the narrative structure of a single comic strip, how Bill Watterson never bothered to explain a whole lot, all that matters to me. And cartoons in general? I’m a big fan of active verbs, and I think the motions of cartoons have given me an awesome bank from which to pull from when I’m writing a very active sequence of events.

CMS: The mentors I’ve had along the way really matter to me. I think it’s natural, but they are the example I follow and I like chasing them (the same way I chased my Dad while playing baseball). So Kevin Moffett, Jason Ockert, Marcus Pactor, Corinna Vallianatos, Jessica Anthony, Jeff Parker, and writers like them.

CMS: I’d like to write a good chapbook of poetry. I’ve got a large collection of shitty poems. It’s good practice for me, but one day I’d like to start writing good poems and publish something meaningful in that regard.

CMS: I still dream of playing baseball, haha. But if not that, I might have opened a coffee bar and pursued something a little more entrepreneurial in that sense. I like the puzzle of business: How do I keep this thing alive?

CMS: I love reading. I love stories. I love making shit. It just kind of works.

CMS: This is tough because I’ve been reading a lot of great things, but the last book I read that I can’t stop talking about was The Largesse of the Sea Maiden by Denis Johnson. I will talk about that whenever with whomever. Talk about a poetic sensibility in regards to fiction writing … Wow. I might reread it soon. Last great film? I don’t watch too many movies these days, but I rewatch Birdman every few months. I just like it. I like talking about it.

CMS: I just finished a novel about this guy, the death of his wife, the death of Major League Baseball, and what it means to let the past die and yadda, yadda. Now I’m just looking for a home. So, reader, if that’s your speed. Let me know. Maybe we can play catch.