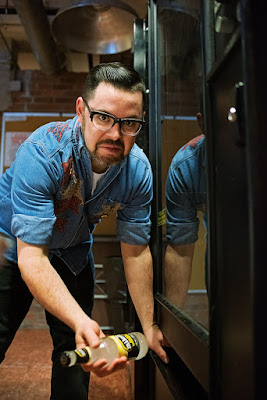 My first chapbook, Uncle Harold’s Maxwell House Haggadah, opened a few more doors for me as a writer. For instance, it’s a bit easier to book readings when you have a chapbook or book out. But the biggest change was the conversion of a group of poems, previously private to me, into a more public realm. Only two of the poems had been published from the chapbook before the whole thing came out. The rest had been ping-ponging exclusively between brain and laptop for years, and all of a sudden many more people could get their hands on them. It was a bit scary.

I really love novels as a fan—I read more novels than anything else. I cannot imagine the work that goes into a good novel. How horrific! I really admire novelists for this reason. Writing a poem, with its sensible size, seemed like a much more manageable task. I’m sure my motivation when I started writing poems was that pragmatic. Now, I’ve come to love the task of telling a full story via little shards of poetry.

The line between “starting a project” and “working full-speed on a project” is nebulous to me, especially since my large-scale projects reveal themselves gradually. Continental Breakfast started in November 2013 and is coming out now, five and a half years later. If I had to pick a point it went from “project I’m starting” to “project I’m working on,” it was maybe halfway through. Until then, I was just writing poems about stuff I thought was funny. Sometimes they come out almost finished, sometimes they’re revised for years.

Continental Breakfast is mostly poems that I wrote individually, which eventually came together to form a book. My second book was a Project Book from the very beginning. Perhaps that’s because the more I write and read poetry, the more I understand how a poetry collection works.

Every poem I’ve ever written is about what it means to exist in the suburbanized and/or gentrified Midwest during brand-centered late capitalism.

I always circle around two lines line from Bruce Springsteen’s “Jungleland:” “the poets down here don't write nothing at all / They just stand back and let it all be.” For my whole life (well, my whole Springsteen-listening life) I’ve had a single interpretation of that line. Then, I recently discussed the line with my friend Morgan and she had a totally different interpretation. Then, I saw the amazing Hanif Abdurraqib speak and he had a still different interpretation. Should a poet down here write anything at all? Should they just stand back and let it all be? Is the answer always the same? I don’t know. My mind changes.

Every editor I’ve worked with has been a delight, specifically Aaron Burch at Hobart, Michael Tager and Ian Anderson at Mason Jar Press, and Martha Bayne and Anne Trubek at Belt Publishing. So, as long as this luck streak continues, I declare it essential.

I started my post-college life as a teacher. At the end of my student teaching, one of my students told me to stop teaching if it stopped being fun. It did, I did. Good advice.

I have a full-time job and a nine-month-old son, so I need to be purposeful in carving out writing time. Monday through Thursday I spend the last hour of my work day writing. I also have a writers club that meets every other week. When I’m feeling very ambitious, I have a daily writing accountability group that I join for a month at a time, where the expectation is producing a poem every day. Without these structures, I’m sure the other busy-nesses in my life would swallow my writing.

Stouffer’s French Bread Pizza heating in an oven, ready to scald the roof of your mouth.

Many of my patron saints are musicians (the Sufjan Stevens Christmas albums, for instance). But the richest cross-genre inspiration for me has come from photography. I first learned photography and poetry can inform each other when I read Erika Meitner’s great 2014 book Copia, which draws from the work of Alec Soth and Brian Ulrich, two photographers I’ve come to love too. Then, one day out of the blue, the great photographer Tara Wray emailed me asking if I wanted to collaborate. Long story short, we’ve got a book coming out soon, and it’s been one of the best collaborative partnerships I’ve ever been a part of. Her work is incredible—look up her #TooTiredProject, a crowdsourced initiative which employs photography as a method to explore issues of living with depression.

I’d love to fly in one of the first class pod things that recline into a bed. I’d also like to get something at a restaurant that sizzles on its way to the table.

I’m a bookseller now, I already tried being a teacher. Those two, plus writer, were my only three ideas. I’m glad at least two of them worked out.

It doesn’t come out until July (#BookstorePerks), but The Nickel Boys by Colson Whitehead is simply stunning.  A brilliantly crafted novel that knocked me over.

At the moment, I’m finishing edits on the first draft of El Dorado Freddy’s, my collaborative book with photographer Tara Wray that’ll be out in 2020. My portion is 30 poems, each one functioning as a poem on its own, but also as a review of a particular chain restaurant. Tara’s part is a color photo portfolio in featuring the buildings, people, and landscapes of these restaurants.

I’m also at work on a third manuscript called Flavortown that investigates and challenges narratives of authenticity via a series of speculative poems about a Guy Fieri-inflected culinary paradise called Flavortown. The whole thing is in its nascent stages, but right now Flavortown also has poems about fatherhood, Christmas, and a crown of sonnets about the Oscar Meyer Wienermobile.