today is my forty-ninth birthday,


Four poems for my forty-ninth birthday

A seismic accumulation. Words as slow as paint.

This memory, pastoral. My father: a handrail,
new against the homestead,

his unsteady gait. A shoal
in his head.

If this a fixed point: I have felt this age
forever. Surroundings swirl, and shift.

The O-Train as it snakes, construction. Timetables,
walked and walking. Wherewithal.

They aim to build this

needlessly slow. I kid, of course. But then:
the concrete

does nothing to absorb the water. Floodplain,
streets. The carved precision

of caged liquid. But,

the clouds. The lightest rail.

Bang on: the texture of
an instant. Letters patent, by which

we mark such passing. Year
against idiot year. Simultaneous,

unpremeditated. How to defend
the little beasts of wear. Would rather

this than otherwise, long
in my death-bed.

Disorienting: just how large is forty-nine?
What

are numbers, really? What a year? I can’t
wrap my head around, mid-

century clatter. Resist! Old enough
to have a daughter

who marks her milestones. The pages
flip, flip back. A wooded terrain

We are all born free

of history, until. I set my age
to airplane mode. Hold on. 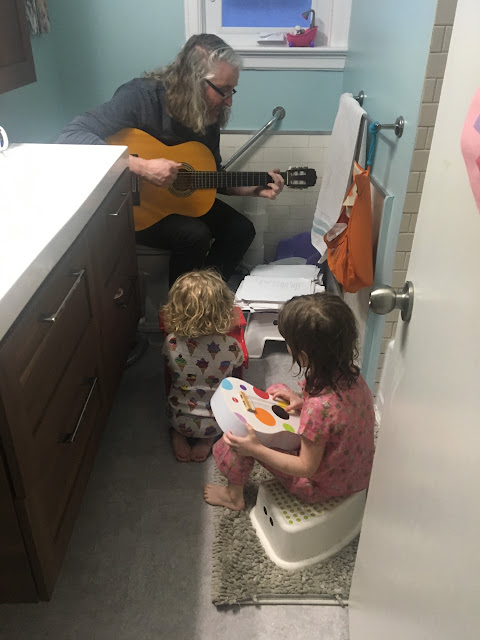 [a recent bathroom concert; given I've been the past few years only able to play guitar during their bath, last week they both bathed quicker, so they could jump out, dress and join in, with Aoife on piano and Rose on her own guitar]

Another year. As I’ve composed these annual birthday notes [remember last year? or the year prior? or the year prior?], a space where I take stock: the year ahead, behind and where I think I am. Forty-nine. How did I get here? Kate is twenty-eight, Rose nearly five-and-a-half, and Aoife will be three next month. I like that our wee two are big enough now that it allows me a different kind of attention, able to do house-things while they’re both home, and even sit at my desk here and there. This March break, for example, having negotiated with them for a bit of desk time in exchange for some plans they might be open to, such as a museum visit. Lunch at the Rideau Centre.

Still, there are times that I feel I spend the bulk of my writing days scrambling to catch up on reviews for the sake of the blog instead of doing actual writing (which isn’t entirely true). At least I know on the day of my birthday party, I might be able to head over to the Carleton Tavern early for a few hours of reading and potential writing: there are times that new stories, for example, are difficult to generate on the laptop at home. While stories are furthered, and carved, for months on end in that space, it is often difficult to get a new story begun unless I’m away from my machine and my time-limitations and into the possibility of sitting quietly for more than two hours.

I am learning how to be organized in a different way, it would seem. Well, then.

Poems, again. Back in January, I began a manuscript tentatively titled “book of magazine verse,” with examples already posted here, here and here (of which my birthday poem for this year is also a part); other pieces from the work-in-progress have been recently accepted by Parentheses (Barcelona), Alessandro Porco’s Monk Press, QWERTY magazine, Train : a poetry journal and the first issue of Tiny Spoon. I’m looking forward to seeing where the manuscript goes.

I would discuss this particular further, but there is time for that later.

Oh, and I have a poetry title with Mansfield Press this spring, A halt, which is empty, as well as a poetry title at some point, Household items, with Ireland’s Salmon Poetry. A halt, which is empty is, in certain ways, my final Centretown-focused title, composed during our second year living on McLeod Street [I composed an essay, during composition, posted in two parts over at Open Book here and here].

I’ve been the past two months, also, working on a short sequence for the sake of the latest dusie kollektiv, requesting chapbook-length works for this year’s New Orleans Poetry Festival, as a “Tribute to Marthe Reed’s Poetix.” Mine will, if I can figure it out, be produced as an above/ground press title (obviously) and a handful of them distributed free to this year’s NOLA. If I can figure out the poem, I think it would add nicely to a furthering of the “snow day” manuscript (which so far includes, only, the chapbook-length snow day I produced last year). There are other elements I’ve attempted to begin for the sake of furthering the manuscript to something book-length, but so far, only fits and starts.

Honestly, I feel not in any particular hurry, although “book of magazine verse” has been pretty entertaining so far, and the manuscript of finished poems has already surpassed forty pages. And my manuscript of short stories, “On beauty,” with a far finer polish, went out last fall. We shall see where that goes.

I would like to return to the unfinished memoir, “The Last Good Year,” and unfinished novel, “Don Quixote” (given I’ve worked on neither in so long, I’m not sure I can still refer to either of them as “in-progress”), but I’m uncertain when or how. Ah, the children.

During the last half of February my father in hospital again, rounding out two or three months of ambulances arriving multiple times at the farm for the sake of his breathing, his inability to catch his breath. He now breathes on a machine, and given a new diagnoses of ALS, on top of the seemingly-unrelated MS he’s had, they think, for a decade or more (and his sleep apnia and diabetes, the cancer from a decade back, and last year’s triple bypass and short-term kidney dialysis). The muscles in his lungs aren’t strong enough to push out the carbon dioxide. He will not improve, they say, but we haven’t any clue as to what that means. We prepare for him to go home, if and when such might be able. He would require care. He requires care, as well as a breathing machine. Until he is beyond what it can do to assist, or simply decides he is done with it.

Everything is slow, but he has been doing better than they might have expected, until the weekend brought a pain in his leg; it took two days to discover it a blood clot in a cyst in his thigh. If they can figure that out, might that mean him home today, or not until next week?