she talks about “frame theory,” the game-bird’s heartbeat under
glass (fluttery to her as a pamphlet or flock of blank ink), wings tied-off.

Song rebuke rescinds the variable. You often measured
pretense between face and thread, when you demonstrated

Only after she died recently [see my poem for her here] did I realize there was a fairly recent book of hers I had completely missed, Kathleen Fraser's m o v e a b le TYYPE (Calicoon NY: Nightboat Books, 2011), an assemblage of shorter works, including collaborative poems she had produced over the years, responding to and with visual art and artists. A year prior to its publication, Fraser had generously gifted me a copy of her il cuore : the heart, Selected Poems 1970-1995 (Wesleyan University Press, 1997), and I suppose I was so thrilled to be able to start engaging with that volume that I didn’t really look much beyond it. How was I only learning about this book now? What else have I missed? I’m kicking myself, but appreciating that the volume is still available at all, allowing some “new” works of hers to cross my path despite her recent death (although I’ve heard Nightboat has been working on a forthcoming Collected Poems for some time). The volume also includes my original introduction to her and her work, the piece/section “hi  dde  violet  i  dde  violet,” a poem that appeared previously as the first chapbook through Peter and Meredith Quartermain’s Nomados Literary Publishers in 2003.

I’ve been enjoying her lyric and her lyric spaces, including the line added as almost explanation to her piece “L i g a t u r e, for Mr Coltrane,” that reads: “ligature: the structure that in certain type faces joins one letter to the next: in music, a curved line connecting notes to be sung or played as one phrase.” And the poem itself, that includes:

It still felt like winter to me. I had on those cheap wool gloves with leather stitched to the palm side and the coat my father had given me for my trip to the city he’d only dreamed of, along with some of his printed notes on the history of type design, clearly stamped with the certainty that N, Y and C had settled the question of where to begin with an alphabet when you were starting to look for a new type face in the shiny empty field of the metal plate. 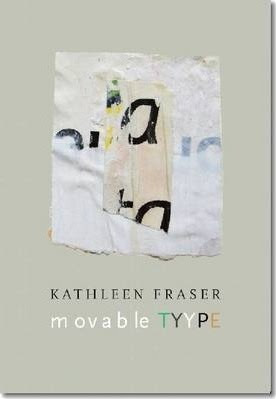 There is such a joy and a curiosity to her work, as well as an awareness of the power and placement of individual letters on the page. If I’ve called Lisa Robertson, for example, a poet of sentences, Kathleen Fraser was a poet of the individual letter, allowing each to live on the page, not simply as part of a word, but in sequence, both separate and whole. And through the collaboration, the response, there exist further explorations on those separations, those seeming contradictions, of being both separate, and together. Oh, what we have lost with her death. But there is so much still to learn from what she left with us.
Posted by rob mclennan at 8:31 AM
Labels: Kathleen Fraser, Nightboat Books, Nomados