My reputation when I stand beneath the stars
is one of tolerance.

I make the shape of a woman standing
in a shed. How many of you can say the same?
Billions and billions served.

I want to impress the stars: carry
a bundle of sticks affixed to a strap
across my back. Walk 4 miles
or no miles at all.

At dawn, I will make a fire. No
biggie. Just another miracle
I may have had a part in.

The stars do not eat my breakfast.
A man eats my breakfast. Like the stars
he cannot take care of me very well.
But oh does he burn.

So I draw the water from the tap.

I draw the tap from memory.

Peekskill, New York-based poet and self-described generalist Paige Ackerson-Kiely’s third full-length poetry collection is Dolefully, A Rampart Stands (New York NY: Penguin, 2019), following In No One’s Land (Boise ID: Ahsahta Press, 2007) and My Love Is a Dead Arctic Explorer (Ahsahta Press, 2012) [see my review of such here]. Set in five sections (including the sequence “Book About A Candle Burning In A Shed,” which appeared as a chapbook through above/ground press in 2011), her lyrics are dense, dream-like and filled with a knowing that often emerges from deep hardship, such as the last third of the poem “The Grandmothers,” that reads:

The beatings are located in the basement or shed
when they used to be out on the prairie, reddening
the sky, little dust drops children ran their toes across.
Whose tears made these? The beatings don’t say
in the dark. The beatings scuffed into the wall
of a newly remodeled home. For each one,
10 more hard miles of trail leading east—
no fires at the campsite, no advice from older women
who have been that way, no map. 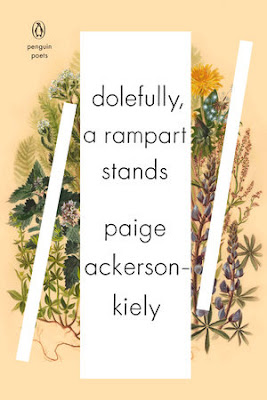 There has long been a mythical quality to Ackerson-Kiely’s poems: in dream-like scenes of occasional violence, loss and longing, she composes narrators/characters that both alternately and concurrently fall apart and unspool, attempt to lose themselves and keep themselves from becoming lost. “But the anger will surface once families get home,” she writes, in the poem “Folding Chairs,” “kick off their boots in the mudroom. I am afraid // I will continue to burn the supper. I am afraid / I have not made enough for everyone.” Touching on elements of the domestic, the pilgrimage and even pioneer settlers, her poems are grounded in her corner of rural America, and one could almost describe her poems as a kind of lyric New England gothic: exploring the deep beauty that emerges through and despite the darker elements. This is a striking collection, one that contains a rich tapestry of subtle multitudes. As she writes in the poem “Meadow Redaction”: “The boat is a crescent of silver birch / I punch my body into.”

Posted by rob mclennan at 8:31 AM
Labels: Paige Ackerson-Kiely, Penguin