7-elesbian: a memoir, the collected tweets of kristen arnett

Anyone is fortunate to follow her on Twitter should be extremely pleased to see the publication of Florida writer Kristen Arnett’s 7-elesbian: a memoir, the collected tweets of kristen arnett (Austin TX: Big Lucks Books, 2019), a charming and elegantly-produced limited edition chapbook that is exactly what the title proclaims. Produced in a first edition of seventy-five copies without author biography or back cover blurb, I would suspect that anyone ordering a copy already knows what they’re in for, especially given her Twitter account currently has 31.2K followers. And, given the “collected” includes but one hundred individual tweets, I would suspect the subtitle a bit of a misnomer, a “selected,” rather than a “collected,” per se (she is rather active in her tweets).

i’d like you all to meet my new girlfriend, the woman behind me in line at 7-eleven this morning who said “breakfast” as she bought six bags of chips 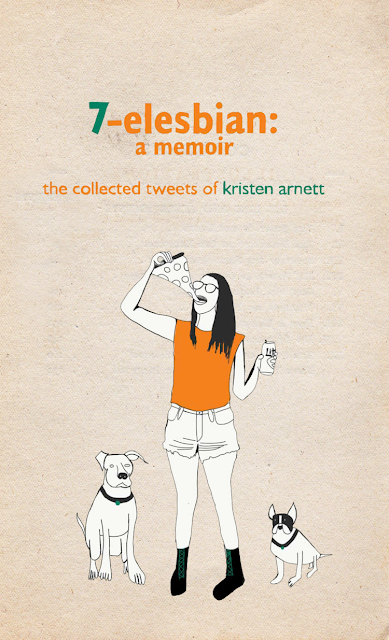 Arnett, a librarian by day, is the also author of the short story debut Felt in the Jaw: stories (Split Lip Press, 2017) and the novel Mostly Dead Things, forthcoming in June 2019 with Tin House Books, both of which I’m curious to read, sparked heavily from her activity on Twitter. When Twitter first came into prominence, there were multiple literary publishers encouraging their authors to have an online presence of some sort, and I could imagine Arnett’s presence, composing unselfconscious, witty, and pithy asides, rife with self-depreciating commentary and brutally funny observations (many of which occur either at her local 7-11 while picking up beer, or during dates), would be both a publisher’s dream and a marketing nightmare. Observant, self-aware, hilarious, savagely smart and, at times, deliberately obtuse, Arnett’s Twitter is what a good percentage of Twitter wishes it could be.