What other thing is there to learn from a parent

besides sadness
the “worthy”

what there is to teach us, they will teach us
and we will make ourselves worthy of “it”

one tree blowing in the field alone

when time means nothing, it is revelation
or dementia
clocks, the needles of trees, the wind

(blowing in the field alone) (“The Voice”) 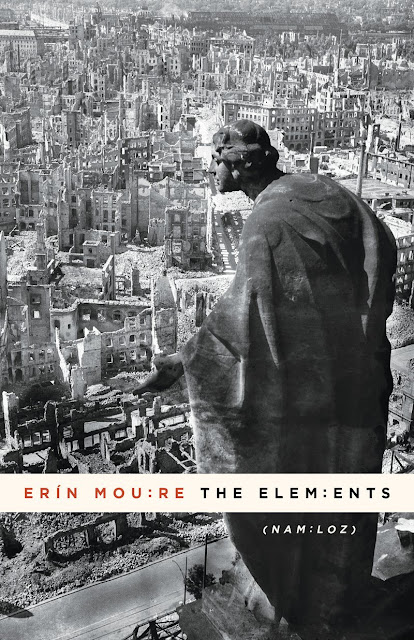 Montreal poet, critic and translator Erín Moure’s latest poetry title is THE ELEM : ENTS (NAM : LOZ) (Toronto ON: Anansi, 2019). Centred around her father, THE ELEM : ENTS is a many-layered book that writes of her father’s passing and the author’s experience with her brothers and their father’s dementia, to their shared history, and multiple threads through their lineage that came well before. As she writes in the poem “Vestimentary”: “Dad / Air Force veteran / gripping the seam of bedsheet, oxygen monitor pacing / his finger red / see-sawing his thin arm through engine failure // holding steady in havoc  / through storm cloud [.]” In a book composed for, about, around and to her late father, the poems that make up this collection ripple out from that centre and return, repeatedly, moving through history and language, stretching out from his own Ontario history through his Galician roots across two centuries.

THE ELEM : ENTS is tethered, at the core, to the life and lineages of William Benito Moure, who was born in Ottawa in 1925, and died in Edmonton in 2013. Through explorations on and around her father, Moure also writes of Pascual Moure, a Second Sergeant in the Galician uprising (“One of the ‘Brigands / Led by Monks’ / Decorated Later / For Valour and Zeal / In the Bloody Battles / Against the French / Armies of Napoleon / 1808”); she writes of translation, from poetry to speaking directly to her father during his lapse into dementia, one word tripping into another. She writes multiple threads and elements that made up her father, and allowed for him to be, and become, from the young man in the capital to the eventual father of three. This book both asks and attempts to answer: who was this man, and what made him? Towards the end of the collection, she even includes a poem of hers from Little Theatres (Anansi, 2005) [see my review of such here], translated into English by her father, with the note: “February 13, 2003 / my dad learning Galician backwards / by translating from Little Theatres / found 2017and copied by EM [.]” The return of her father through a translation of Moure’s own words, in those few lines, is quite powerful. What is memory, and how is a life constructed, recalled or remembered, through the filter of dementia?

I think I was awash in the sea of birds.
Verbs were why I wrote,

I wrote to rid myself of verbs.

Trials were alphabets. I found myself guilty. I found
myself alone
scraping letters in Edmonton on a granite stone.

I was seventeen, jut barely.

I think I was awash in a dream of verbs.
Birds circled over roofs
that sheltered me.

I tried to follow you, grave verbs, all my life,
with a yellow notebook through the East of Europe
the far East of Europe, Gad Šmānê, nearly Asia

and I am sixty-three and
I am seventeen and, dear verbe, next year if I am alive

I will turn twenty.

What is interesting is to see this collection in relation to her memoir Sitting Shiva on Minto Avenue, by Toots (Vancouver BC: New Star Books, 2017) [see my review of such here], another book-length exploration written as both tribute and portrait of someone the author had lost, but one composed as a prose collage over the complex, multi-lingual and intricately-precise lyric weave of this current collection. In certain ways, there is less a sense of loss in this work than a sense of attempting to document, acknowledge and deciepher, as well  as provide tribute. The loss of a parent is always an upheaval, from any perspective, one that is universal, and impossible to avoid, but Moure’s rich and remarkable THE ELEM : ENTS (NAM : LOZ) is a book not of loss, per se, but one of what, through him, they had been fortunate enough to have gained through his presence, and even discovered, through the process of his illness, and the papers left behind after his death. From “Where Language Lives: A Conversation with Erín Moure,” an interview conducted by Francesca Bianco posted online at Vallum magazine on April 7, 2017, one could infer that this collection began to truly take form during her time in Edmonton, suggesting a deliberate effort on the part of the author to attempt to shape a collection on and around her father in the same city where he spent the remainder of his life. As part of a lengthy response to the question of what she is working on, she responds: “I’ll be working on that project next winter when I am Writer-in-Residence at the University of Alberta in Edmonton, and will be also working on a new book of poems, tentatively titled The Elements.” Earlier in the same interview, it reads:

FB: Your most recent book of poetry deals with translation as a process, and dying as process. In The Unmemntioable, death transforms the speaker, in the same way that language is transformative. Through reading the poems, we are touched by the ineffable that arises when attempting to articulate death. Is it because we lose language in that final moment of conversion? Does the misspelling or alteration of the title, The Unmemntioable [see my review of such here], result from this loss?

EM: It is an irrevocable fact that we cannot report on our own death; facing death is to face a place where language will fail us. The alteration of the word that forms the title of the book indicates physically and materially in the word itself what the word means. For something to be merely “unmentionable” means it can and has already been mentioned. The alteration erases that particular mentionability and allows The Unmemntioable to speak for itself.

Posted by rob mclennan at 8:31 AM
Labels: Anansi, Erin Moure