What is G must be greater than my desire to bury G while securing in earth to witness growth. If precision is what I aspire to, then I must let G drop down from the alphabet and be here. Rows of seeds and seeds cupped in our hands. G is a garden and seems simple.

New Jersey writer and artist Emmalea Russo’s debut full-length poetry title, after the appearance of a chapbook through Dancing Girl Press, is G (Futurepoem, 2018), a book that already mentions a second title forthcoming in 2019, Wave Archive, with Book*hug. The first and largest part of the collection, simply titled “ONE,” is a sequence of sixty-four paired poems, writing almost a self-call and response, as the two poems twirl around each other akin to parts of a molecule. The piece above, for example, is the second of the opening pair, a duo that begins with a squared poem that reads: “Cultivate one two three: / Row makes simple / I engenders I enters and / I Greet Greets on Gar / Dens G o Grammars G of a / Group of Growths as: / Eventually even I Grow / East seeping into a G he [.]” The second section of the collection, held at the end, exists in more traditional (at least in comparison) prose, and opens:

I don’t write. I sweat in the garden and pull weeds, trample, hold up tomatoes.

G and I plan to make a garden and use what we’ve made. We begin by deciding which part of the yard will be ours. Seems simple.

I can’t know what G is feeling and so the reverse also must be true.

There is a sensation in my mind of a zooming in and out. Wonderland-like. I discover the word qualia. I experience green differently from G. Our differing experiences of headache, summer, the process of enclosing a feeling within an object or idea. The connections, not the connected. Are G and I connected? If yes, by what and for how long?

We garden in the back of the house near the abandoned railroad tracks. We ruin overgrowth. We make ourselves at ease inside the word we. 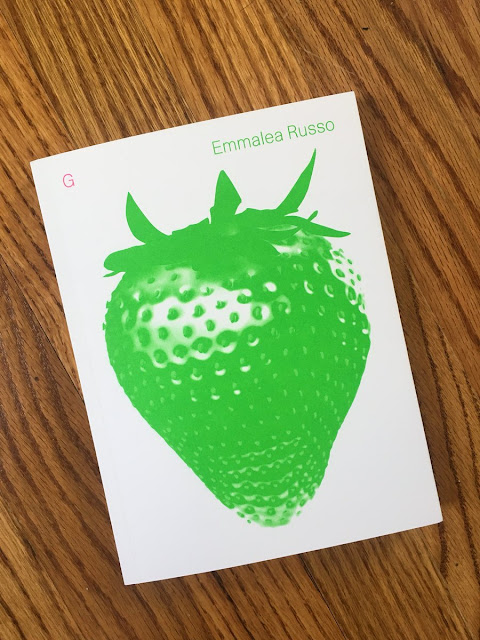 G is a poem writing in and out of a paired subject matter: the composition and maintaining of a garden, and the composition and maintaining of a relationship, even as both are nurtured, mature, break down and even fall entirely apart. There are elements to the book that read like an instruction manual or meditation on gardening (Ottawa poet Monty Reid’s 2016 Chaudiere title, the lyric meditation Garden, also comes to mind), while other times the G shifts to refer to the narrator’s partner, and the poem incorporates the movement of a relationship; there are times that the book moves through language itself, broken down like soil, or even into theory, wonderfully managing to be all of the above, while maintaining the integrity of what is constructed to exist as a book-length poem out of a variety of elements. This book is fascinating, both in how it is constructed and how it flows, from beginning to end, and I’m curious to see just how her Book*hug title is shaped. As Ariel Yelen writes to introduce an interview with the author at BOMB magazine (posted February 1, 2019): “Emmalea Russo’s G (Futurepoem) is a book about construction and destruction—a garden and a relationship zoom in and out of focus while language is moved around and often out of the way completely.” As part of that interview, Russo responds:

It was a long, strange process. I started in 2012 and the form was very different. I wanted to write about making a garden, being in a relationship, and the creation and destruction that comes with those endeavors. The relationship in G is the electrical current that moves the text while the books and art I was thinking about at the time—Carol Bove, Alfred North Whitehead, Kundalini yoga, panpsychism—also come into the work. I wanted to transmit energy and the words were almost getting in the way.