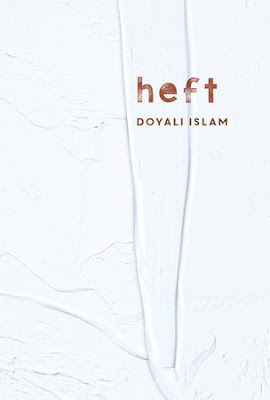 Toronto poet and Arc Poetry Magazine poetry editor Doyali Islam’s second collection is heft (Toronto ON: McClelland and Stewart, 2019), a collection that feels a considerable leap in craft and nuance from her Yusuf and the Lotus Flower (Ottawa ON: BuschekBooks, 2011). Given the width of the poems in this collection, I’ll admit I’m unclear why the book simply wasn’t given a binding on the side (making the book wider than tall) instead of the current standard book format, which requires having to turn the book to read (which is rather awkward, admittedly). Toronto writer Michael Redhill’s Light-crossing (House of Anansi Press, 2011), or Winnipeg writer Méira Cook’s Slovenly Love (Brick Books, 2003), both of which made far more sense lengthened for the sake of shorter poems composed with long lines. It is possible, and made the work far easier to read.

heft is the third in the quartet of first titles from McClelland and Stewart poetry editor Dionne Brand [see my review of Souvankham Thammavongsa’s Cluster here and of Kaie Kellough’s Magnetic Equator here]. I’m uncertain if there’s a specific term for such (the blurb from Philip Metres on the back cover refers to her poems as “bifurcated”), but Islam’s pieces exist as two side-by-side stanzas, composed as a collection of pairings: poems cut in two, but separate. In an interview posted online at the International Festival of Authors website in 2017, prompted by the launch of the first volume of The Unpublished City [also edited by Dionne Brand; see my review of such here], she speaks of the as-yet-unpublished collection:

As a collection, heft is formally innovative and lyrical. It contains a section of ‘parallel poems’ – a poetic form that I invented in the summer of 2010 and have been working in since then. One of these ‘parallel poems’ is my contribution to The Unpublished City collection, “43rd parallel”.

The manuscript of heft also contains my innovations on the traditional Shakespearean sonnet, in the form of my self-termed ‘split sonnets’ and ‘double sonnets’. The poem bhater mondo, which was nominated for the 2017 National Magazine Awards, is an example of my ‘split sonnets’.

The poems in heft carry, and take on, enormous weight, populated by personal and political histories, many of which are intricately connected. And while the heft might be great, she never allows the poems to overwhelm. Curious, meditative and questioning, heft is an impressive collection, and one, eight years after her debut, that has been very much worth the wait (see what I did there?). As the poem “scale,” ends: “if grief can we weighed, my mother has borne / more of it, and what if torn wings tip / the balance, render life unbearable? / my hands are human, mostly unable / to restore anything.”

Posted by rob mclennan at 8:31 AM
Labels: Doyali Islam, McClelland and Stewart